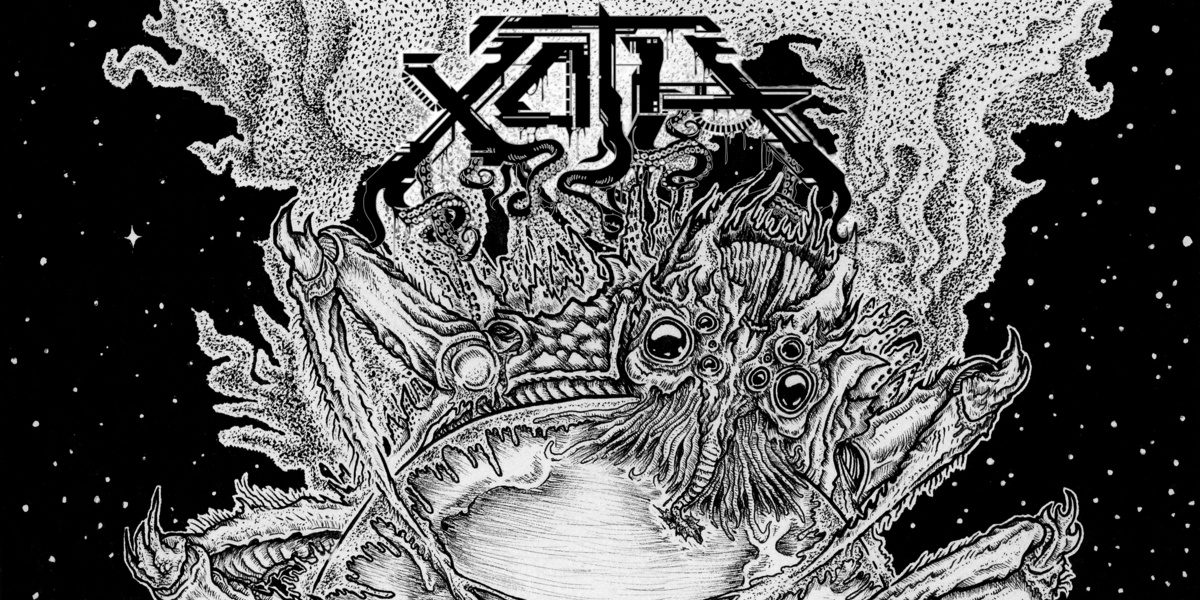 It’s also, very more than likely, crammed full of terrifying unknown shit. And the shit we do know doesn’t make a lot of sense.

Apparently, it also smells of searing flesh and burning steel, so it should come as no surprise that it’s a source of some inspiration for metal. Viking longboats on the horizon might spell doom for a peaceful fishing village but, if you really want to earn the screams of millions, there’s nothing quite like the malicious attentions of a billion tonnes of high technology hanging in the sky in very much the same way a brick doesn’t.

It’s the scale of the thing. Impersonal, grand and significant in all the ways you suspect you’re not when you look up at the night sky.

This is not unlike the feeling I get from Xoth, on their debut album. (Except it isn’t, really. Everyone here has come from their own, already respected outfits. Every one of these guys knows what they’re doing, and it’s pretty fucking solid work, all round. No rooky mistakes, no bullshit.)

Just damn good space faring, epic, blackened metal. Usually I’d advise against choosing a genre that’s four words long, just because that kind of thing can give the whole piece an unfocused vibe in the wrong hands. But nobody here asked me, and thank god for that. “Cosmic epic blackened metal” might be a fucking mouthful to say, but give this a spin and you’ll hear what I mean quicker than I’ll be able to explain it. Doing that also comes with the bonus that you’ll actually be listening to the album itself, and that I can certainly recommend.

Musically, it begins with a nicely unusual intro track called “Cocoon Earth” that manages to sound like what might happen if you tuned a digital radio to every station at once and attached it to a lost Russian satellite. It’s confusing and discordant, messy, and an absolutely brilliant setup for what follows. It gets pretty heavy after that and stays there, using heavy rhythms and punishing, grinding guitar work to keep the weight on, but shifting enough that you’ll never get comfortable. Jeremy Salvo earns his fucking name too, banging out the backing rhythm with the kind of intensity you’d expect on the bridge of a slave trireme.

The real star is the lyrics though. The intensity of the growling sounds great, but sometimes it means you’ll have to squint with your ears to hear what’s going on, and that’s a real fucking shame, because the lyrics are pure, filtered gold. There’s death, deicide and mutation. Also, fucking tentaclaws.

I can heartily recommend it.

(Also, full disclosure, Xoth’s Tyler Sturgill is an occasional contributor to HollywoodMetal, but don’t worry, I wouldn’t let insulting a fellow writer get in the way of my journalistic integrity. Partially because we live several thousand miles away from each other, but mostly because even we’re more professional than Gamespot)