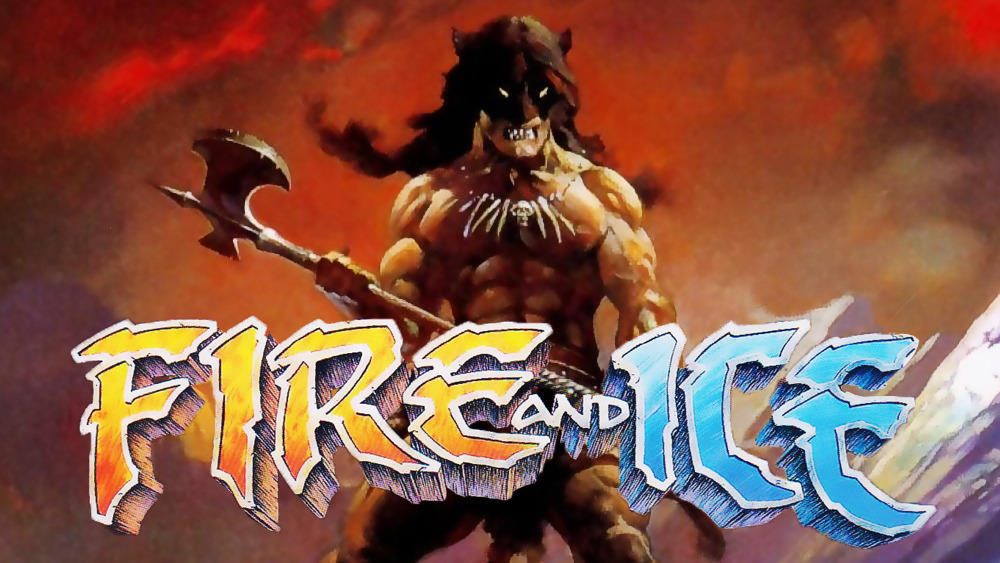 I do not think I did, but may have squealed. I can’t be sure. I tried to subdue my excitement when replying to Brendan’s latest email asking me if I wanted to start reviewing movies. “Do not show all of your cards at once,” I told myself. “Try to stave your excitement or there will be no mystery.” Along with heavy metal, forgotten surf rock, and model ships in bottles, fantasy holds a large part of my interests hostage. If you would like a refinement of that category, my interests are fantasy films and still further are fantasy films from the 1980s. Still further are sword and sorcery films from the 1980s and still more minute are animated sword and sorcery films from the 1980s specifically targeted towards adult males. I think I could find an older film to review. Do not jump out of your seat. Just remain calm. 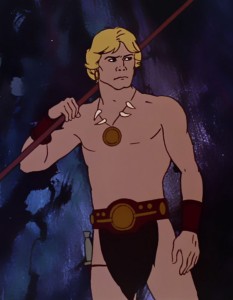 It isn’t coincidence that Manowar’s 1983 record Into Glory Ride was also released in 1983. This was the year that things became amazing and clad in fur.

Fire and Ice was created by a collaboration between adult animation pioneer Ralph Bakshi and fantasy painter Frank Frazetta. The film followed the success of Bakshi’s gritty underground classics Fritz the Cat in 1972 and Heavy Traffic in 1973 as well as the whacked out surreal epic Wizards in 1977. Fire and Ice retains a simple formula. Take a competent director, character designs from a venerable fantasy artist artist, and backgrounds by Thomas Kinkade and the guy who drew Dinotopia. Next, mix in a rudimentary story detailing the war between two archetypal kingdoms. Subtract 80% of the dialogue and replace that percent with gratuitous skin shots and impractical clothing. Cover the whole thing with rotoscoped animation, topped off with one of the most ridiculous antagonists and you have a film dreamt up inside the head of a stoned 17 year old looking at a Molly Hatchet album cover.

The collaboration between Frazetta and Bakshi cannot be underscored enough for its importance in the field of adult fantasy. Fire and Ice, along with other films like Wizards and magazines like Heavy Metal and Epic Illustrated are a part of a niche market dedicated to older fans of fantasy who enjoy a healthy dose of sex and violence on top of their stories about dragons. The sword and sorcery formula is more primal and lurid than its high fantasy sister and also seems to replace things like story for visceral conflict. One of the most important things to remember about sword and sorcery, adult animation, and Fire and Ice is that its simplicity and pulp like existence is part of a greater structure. A structure which makes my knees weak in enjoyment.

Fire and Ice was written by Roy Thomas, who along with Gerry Conway, provided stories for Marvel’s Conan run in the 1970s. “The Savage Sword of Conan,” created in 1974, was a more mature and sensational take on the Robert E Howard character. Thomas’s work with the Conan storylines illustrates the angle in which Fire and Ice’s own storyline originates. Fire and Ice, in essence, is a combination of material from Conan the Barbarian, Kull The Conqueror, and.. well.. He-Man. The film sort of follows Larn, the sole surviving member of a village after it is pillaged by a horde of savages at the bidding of an ice sorcerer named Nekron. Larn’s village is merely collateral damage in an ongoing act of aggression by Nekron’s ice kingdom as it attempts to make its way across a neutral plain into Firekeep — the stronghold of the fire kingdom. I know I can already hear your interest piquing.

Larn’s role in the entire affair is only made more complicated when he meets the Fire king’s daughter Princess Teegra after she escapes kidnappers who took her from the Firekeep. Larn and Teegra encounter trial after trial in the quest to return to Firekeep only aided by a mysterious hatchet wielding rider, Darkwolf, and constantly foiled by Nekron and his overprotective mother Juliana. I am not going to ruin anything but eventually evil is thwarted and the two kingdoms meld creating a large Thomas Kinkade portrait of a new water kingdom. Recalling Fire and Ice’s plot is simple because the story is simple. The characters are flat and the narrative is downright laughable. The reason that Fire and Ice is still amazing is purely hinged on the aesthetics of escapism.

Fire and Ice is a darkened basement or bedroom only lit by reading lamp. It is sitting on one’s bed, couch, or carpet reading stories with impossible narratives and fantastic characters. It is part of a lineage that stretches back to the early 20th century when writers sold cheap stories printed on cheaper paper. It is a part of a culture that values familiarity and guiding beliefs. While I, of course, prize originality and creativity, there is something comforting in the mythos of a genre and the desire to fit into a larger tradition. Fire and Ice may not be the best film ever made, not even in the realm of fantasy films, but I wont just end this review saying that it is just entertaining and fun. The film’s merits transcend entertainment and become something transcendental. It is apart of a family. It is something that makes me weak in the knees. Something that makes me leap across time and space. I am no longer typing this in 2013, rather lying stoned on a bed in 1983. This Molly Hatchet album cover is my portal and on the other side is magic.