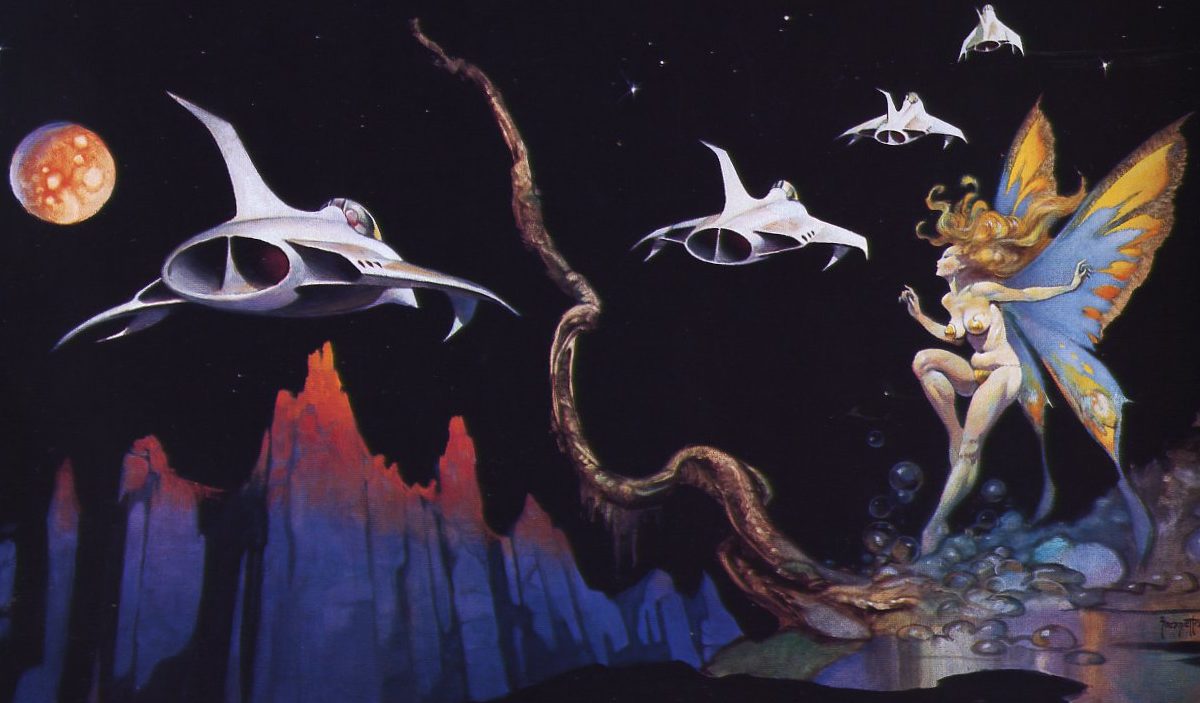 Well here we are in the deep of March and by the looks of it we are not slowing down with any new material being released. Something that I noticed that is different than searching for black metal or dungeon synth each month is the need to diversify tags. While the other two could be found with one tag, all of this new material came through the various tags of “speed metal,” “NWOTHM,” “NWOBHM,” “traditional,” “doom,” and he all confusing “heavy.” I believe it is this diversity or even nebulous nature that is allowing this style to have its complexity where good music does not rest in one location.

This month’s Frank Frazetta header image comes from the variant cover for L. Ron Hubbard Presents Writers of the Future, Vol. III published in 1987. The title is Dream Flight and is probably one of the less racy pictures involving less than fully clothed figures. The black background is a stage for the spares vibrant colors of the space faery which watches the ships go off into the beyond. The combination of fantasy, sci fi, fairytales, and exotic erotica is enough to give Frazetta his defining style.

Holy fuck what a goddamn fantastic record. From the lands of Germany comes a record that is both dead set on the style of sci fi influenced traditional metal but also has enough room for experimentation. From acoustic interludes to harsh segues, Lunar Shadow is the first LP release in 2017 for Cruz del Sur Music. If those words mean anything to you then you are set for an intense ride into the reaches of space and beyond.

When making a name, I am sure there is always a choice whether or not to put an umlaut on some letter. It is funny how accents have become apart of heavy metal customs. I am not complaining at it always looks great on logos. From seemingly nowhere comes a fantastic LP from a Portuguese band that preludes this debut with no fanfare or announcements. Savage is as of yet floating in free space without any sort of label representation and it seems to be doing pretty alright for itself.

Yes to everything about this and much more. From Sarlacc Productions coms a speed / heavy metal band that seems to be running on the engine of ancient magic. With a sound that never slows for pedestrians, Chevalier makes a thunderous declaration with Call To Arms which is pushing me to join whatever battle regiment they are putting together.

This is not the most ridiculous cover in the history of metal but it certainly is traveling to that destination. For a band that boasts speed metal aggression and machismo, perhaps this cover is not that far off from the mark as it could call back to heavy metal’s rude history. Maybe this cover is downright offensive. Maybe it is both. While we debate and decide, I am going to listen to Crack of the Whip while others are talking.

Razorblade Messiah doesn’t have the production punch as other bands yet their strength seems to lie in a more subtle build of excitement. From the work between the percussion and guitars to roll a wave of old heavy metal / thrash across a landscape, Ride the Razor EP seems to get better and better as its 18 minutes get played over and over again.

At the moment, only one track is available for the future release of the debut Lp for Chicago based Satan’s Hallow. If the rest of the album is anything like the closing track “Beyond the Bells,” I can be certain that this band will be discussed throughout the rest of the year. With a powerful vocalist that rides femininity and aggression backed by some exciting guitar solos, Satan’s Hallow makes the whole concept of a wood grove owned by the dark lord very appealing.

Oh my god yes. If there is anything that really can get me off the chair and dancing, it is slowed paced occult ridden heavy metal / doom. Pagan Altar, The Obsessed, and Witchfinder General all have a special place in my heart and Lucifer’s Chalice pulls at those very strings. With an education in old heavy metal, Lucifer’s Chalice uses the doom template to construct epic and raw heavy metal pilgrimages which wind and twist around old mausoleums and castle ruins.