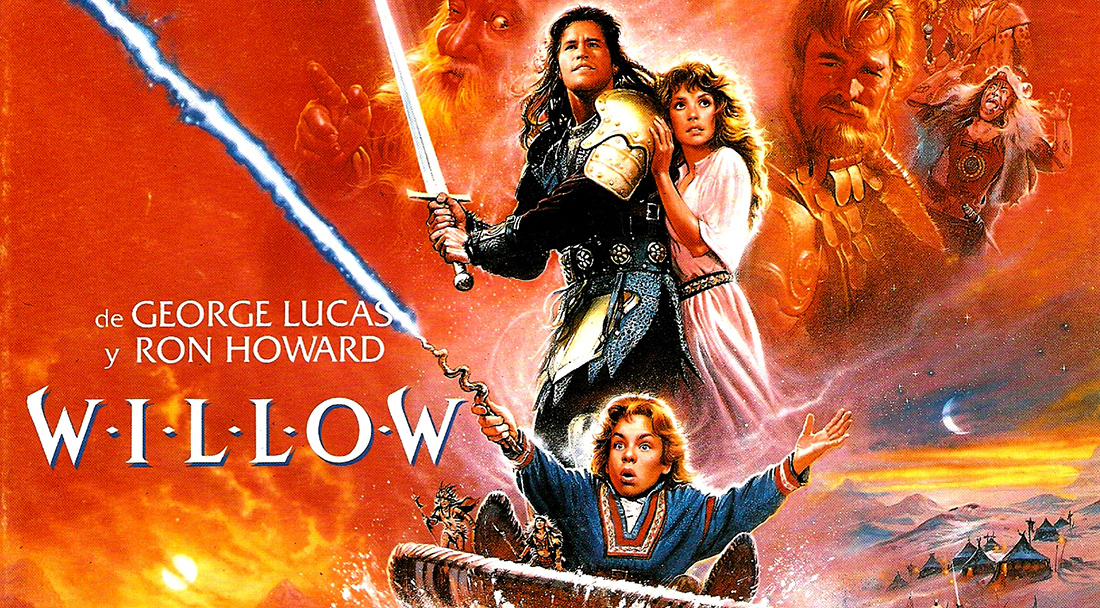 Alright. So looking at my list of sword and sorcery films from the past and present, Willow may be the most popular. In fact, along with 1982’s Conan the Barbarian, Willow stands as one of the most recognizable 80’s fantasy films. This is not due to any cultural longevity, like our muscle clad warrior Conan, rather Willow comes edged between the careers of famous filmmakers and future actors. Ron Howard and George Lucas both share a hand in this uneven fantasy film, which served as another progressive step for visual effects employed by Lucas’ Industrial Light and Magic. Willow is cut right from the big studio template and, at one time, offered older children and parents a rousing dark family fantasy perfect for escaping the heat of the summer. I just wonder if it still holds up after so many years.

Willow tells the well-traveled story of unlikely heroes facing seemingly insurmountable foes in a plot that sees the fate of the universe balanced on a razor thin edge. Willow, a simple little person, has to safeguard an infant princess destined to be sacrificed by an evil sorceress, named Bavmorda, that looks like Maleficent from Sleeping Beauty. Bavmorda fears all infants after it was prophesied that one of them will bring her downfall and peace to the world. If the biblical references were not already hitting you in the face, Elora Danan (the infant) is sent downriver in a basket only to be found by Willow as a beginning to his long journey. Along the way, Willow meets a cast of characters and situations that all culminate to not only the defeat of evil but learning experiences for all major players involved. One of Kevin Pollack’s first films before he became famous for Dr. Doolittle 2.

The story of Willow is sort of like Lord of the Rings. And when I say sort of I actually mean the characters are outright plagiarized. It should be called “Lord of the Babies.” Willow Ufgood is Frodo, Madmartigan is a cross between Han Solo and Aragorn, the evil Queen Bavmorda and the good sorceress Raziel are Saruman and Gandalf respectively, Arik Thaughbaer is Bormir who eventually dies after his retribution, General Kael (aka Skeletor) is a single character combination of the Nazgûl and Urak-hai as he is the warrior underling to the main antagonist, Meegosh is the faithful Samwise Gangee to Willow, Cherlindrea is Galadriel, and those little brownies are comic relief to take the place of Merry and Pippin. It is difficult to escape Tolkien in any fantasy setting, but holy shit, this whole connection is something I completely missed when I was 8.

Despite my slightly comedic ribbing of the film’s characters, Willow maintains and even holds up as an entertaining fantasy film. The visual presentation is beautiful, the action is entertaining, and the instances of one liners and comedic situations still make me laugh. I sort of like the brownies. In fact, I was stifling laughter next to my wife who found the same characters irritating and obnoxious. What can I say, they have heart. Willow has the budget and A list creators backing it to construct a fun film that sports character growth, dynamic interaction, and special effects, which haven’t aged well since its inception. In fact, this film would be near perfect if it were not for some glaring flaws which could only be picked out over 20 years later. Warwick Davis. Sometimes you have to play a killer leprechaun for ten years to finally land the role of a charms master at Hogwarts School of Wizardry.

To preface, I understand it is a fantasy film. Just calm down. But sometimes directors rely on cliches and tropes rather than addressing simple logic to add flare to their plots. Example. Why doesn’t Bavmorda just stab the baby rather than performing an all night ritual to send the child into the netherworld? Also, Sorsha, the princess warrior and daughter of Bavmorda, defects to the good side after being swooned by Madmartigan under a love potion, which was ludicrous bordering on offensive for anyone hoping for a strong female character. Lastly, if a novice sorcerer can make a two headed monster able to defeat an entire army out of wand, a troll, and festering water why hasn’t this sort of creation been used as a weapon by the evil kingdom? Seems a better use of time than spending resources looking for an infant. It is these questions one asks themselves after reading paperback fantasy novels and listening to metal records with dragons on the cover. It is these thoughts that keeps one laying in bed, awake at night.

Despite obvious flaws, Willow retains its childhood charm from initial viewing. The film would famously go on to be a commercial failure, but still remains that movie everyone saw when they were a kid and were freaked the fuck out by the warthogs, two headed dragons, and 13 hour baby killing rituals. The film would also be sort of the inspiration for a Nintendo action RPG that has nothing to do with the original film and was fucking goddamn hard to beat. Hey, what the fuck ever. I am glad I got the opportunity to see this because it is downhill in terms of budget from here.