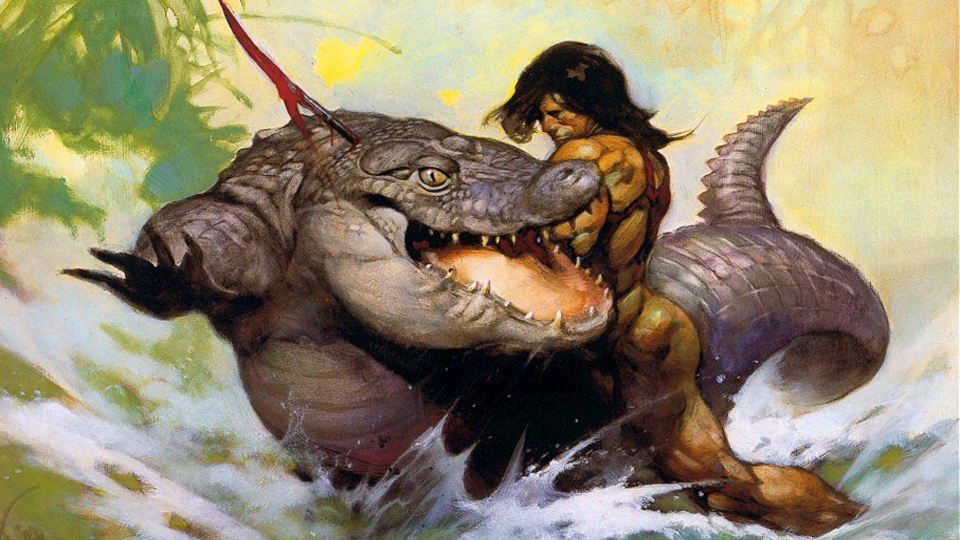 I feel both relieved and strange about the fact that the majority of this list comes from one source. NWOTHM Full Albums has been a primary source to the influx of new traditional and speed metal throughout the year. I have been culling the 2017 albums, EPs, and demos which has been constantly updating the world with rad music. Perhaps in the future we will have multiple sources for this type of music but for now it seems to be relegated to a few killer outlets. Before that however, some things I found in the various heaps of the internet.

The cover painting comes from Frazetta and adorns the 1964 mass paperback cover for Edgar Rice Burroughs penultimate novel Land of Terror first published in 1944. The cover certainly shows a Conan like figure but Burroughs novel has nothing to do with Conan. In the 60’s boom of sci fi paperbacks, I do not think publishers gave two shits about what was on the cover since they were dragging up anything to sell books. what we have now is a Conan like figure wrestling a goddamn big alligator and it is awesome.

Music: USPM. Production: First Wave Black Metal. Cover Art: Underground death. Experience: Making out in a biker bar. There has been a lot of first wave black metal worship bands as of late which have all been pretty good. Blood Eagle steps up the game by worshipping early Jag Panzer, Omen, and Motorhead just with blown speakers and whisky laden breath.

Armored Knight is one of those bands that could have been pulled from the 80’s and no one would question it. From logo to sound, these Chilean musicians are almost existing in two time periods. Ashes of Glory is a single that follows an EP and Demo which circles around a potential full length. While the production and energy is not at maximum power, the promise for this band has steadily been climbing up that fabled mountain.

Right out of the gate without any sort of EP, single or demo, this Canadian band tackles 2017 with a fantastic debut which has left my head spinning with bafflement. While the production and lyrics are a step lower than the guitar skills, the whole experience of Emblem’s self titled introduction is nothing less than dazzling.

What an odd duck. Oblivion is a very popular name in terms of metal with more than 20 bands listed on The Metal Archives. This Oblivion is not one of them as either they are still too new or too weird to be included anywhere. With a weird mix of 70’s heavy metal and smooth progressive rock, this band caters to peoples niche love of Uriah Heep, Manilla Road, and any other hard rock band that blew their minds on acid and fantasy.

Is this thrash, power, or heavy metal? Both…sort of. All? Maybe. Eruption is a Slovenian band that has a lot of things going for it including a top notch production which highlights all aspects of the music. With a starting point in front of many new albums from legacy bands, Eruption is a fantastic choice for people who are underwhelmed by the absence of thrash/power/heavy metal in today’s metal landscape.

NoVoN has many quirks not even getting into how they capitalize their name. With a love for Blind Guardian and an even bigger penchant for heavy metal tropes, this German band sings their hearts out with some quality level guitar solos. Though this band seems weird, after a few beers you will not be able to resist the charm for positive power metal.

Fuck it, there are no rules! This is black/speed coming and breaking shit in a traditional heavy metal column. Though Hellripper certainly fits into the battlion led by Speedwolf and Midnight, Coagulating Dakrness leans on the guitarwork of old power metal resulting into something that is dark but blindingly entertaining. Also to note this band is not Hellbringer, the Austrailian Speed thrash band who had a great album last year this is Hellripper, the UK Speed black project. Get it right.