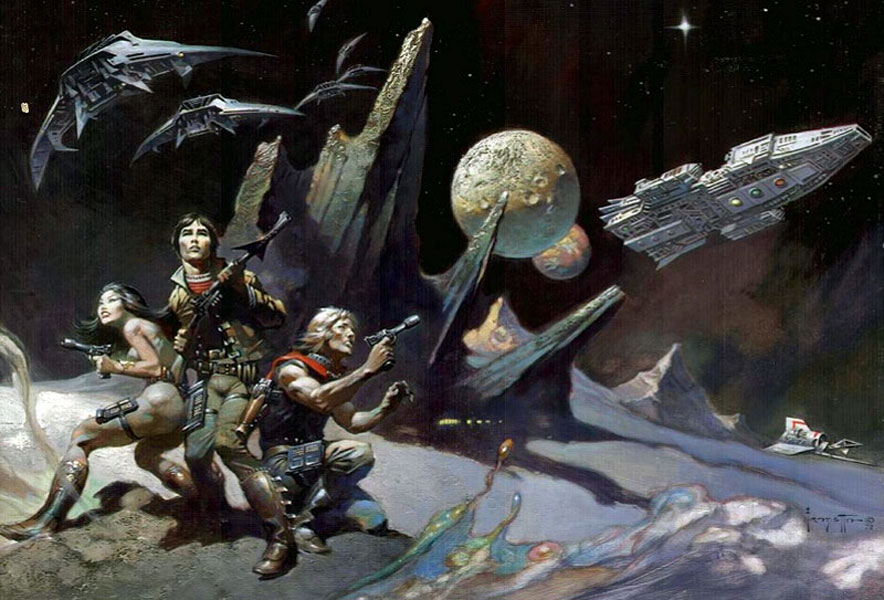 This is the second sailing of Heavy Metal 2017. My intention was to keep up with all of the new heavy, speed, power, and partial doom that is experiencing not a revival but renewed interest. Had this genre of music not lie on the far side of known, I believe it would be more popular, in fact gaining a legion of new followers who do not understand some of the more extreme waltzes of heavy metal. Clean, direct, and packed with optimism much of this music would find its way easy into people’s hearts had is not fallen into the laps of nerds who can not get enough of this type of sound. Tons of credit goes to the NWOTHM Full Albums channel for continuing to upload these types of demos.

The featured image was one of three paintings Frank Fraztta completed for the 1978 television show Battlestar Galatica. Supposedly the paintings were done as a way to spur interest in a show that was already failing in the shadow of Star Wars which weas its obvious inspiration. The history of Battlestar Galatica is something that could have its own article and perhaps I will spend a whole summer watching the original series.

Fuck. Fuck. Fuck. this is great. Speedrush is aptly named as it starts at 60 and ends somewhere flying in mid air. Guided by albums like Liege Lord’s Master Control and tech thrash obscurities like Realm which this album name maybe in reference to, Speedrush suits up in great uniforms and charges into battle on flame spitting motorcycles. Fueled by grit and oiled by prowess, Endless War is high explosive fun that is capable of leaving lacerations.

Norway. Land of the future. Year 3017. Pulsar is the type of band and Alien Civilization is the type of demo I love to find in my searching. Far from refined, this band still has dents and kinks which they need to work out but underneath all of the obvious flaws is a wonderful band waiting for a fantastic release. In years of searching through lesser known black and death metal, this demo is the heavy equivalent to a lo fi cassette tape. Through the muck and mire of some very off putting elements lies a gem waiting to be polished.

Oh man. This.. is…. So great. I think the same thing which was said about Pulsar applies here in that this is a very rough demo which maybe of putting to anyone who expects their power / heavy to have reflective vocals. Candle is a flawed band with a a demo that is all over the map. With that said, the raw power which seems to be worn like battle amror by this band shines through the production and instrumentation flubs. I am convinced. Everyone else is wrong. If you ever traveled through old bizarre heavy metal oddities, then Candle is not going to be much of a stretch.

Don’t Drop the Sword is a power metal band who is very quick to realize what is going on. Instead of flashy dragons and scaling wizards, Don’t Drop The Swords leans on the gruff beginnings of United States power metal and even early German Power metal with an album which decent riffs and convincing melodies. There is nothing spectacular here other than a record which does more at building a foundation that trying to shoot off fireworks.

Oddly there is another band named Stickfork who was a forgotten hard rock / alt metal band from Georgia that has nothing to do with the other StichFork from Kentucky. I am sort of shocked that the name is shared with two bands but regardless if you listening to long traditional metal instrumentals you are in the right place. StickFork’s demo could just that, a demo before vocals are place on top as the music seems to be geared towards having a vocalist. Still though ending to songs like “Effigy” are still exciting regardless if there are any vocals or not.