House Of Life: The Aspirations of George Frederic Watts 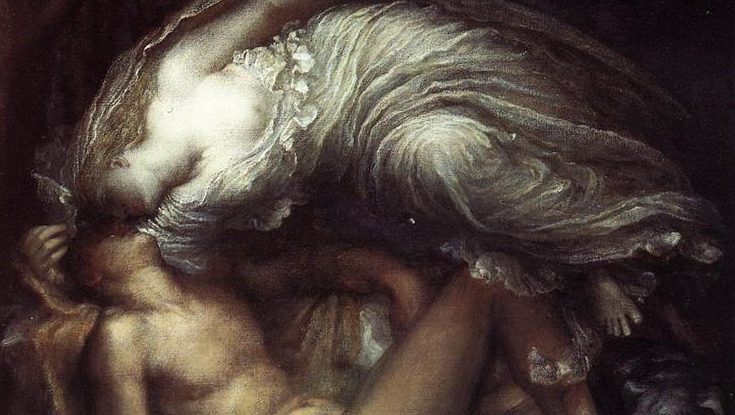 The Sower of Systems (pictured below) was a 1902 painting by Victorian painter George Frederic Watts. Watts, a symbolist painter, would die two years later so The Sower of Systems would be one of his last. Sower of Systems is notable for its use of abstraction before the Impressionist and Expressionist movements which would precede the exploration into visual abstraction. Watt’s painting of God creating the world remains a heavily atmospheric painting depicting an obscure entity creating the galaxies and sowing the seeds of life across the darkness. This factoid is but many in a life of a painter who still remains somewhat obscured from modern thought when it comes to fine art. Watts, and the symbolists in general, remain an important piece of Western art even if their work is not as marketable to a non specialized crowed compared to the Impressionists, Fauvists, and even Surrealists. The symbolists were concerned with what lay beyond the real and used objects and allegory as a way to ritualized the quest for the unknowable. They were also way ahead of the artworld already deep in thought with ideas not ready to be fully realized. The work of George Frederic Watts seems to be split in half representing two people. On the one side is an academic portrait painters whose works include portraits of May Prinsep, Miss Arabella Prescott, and Alexander Constantine Ionides and his Wife Euterpe with their children Constantine Alexander, Aglaia, Luke and Alecco. The other Watts was a painter whose imagination made works titled “Death Crowning Innocence,” “Love Triumphant,” and of course “Watchman, What of the Night?” The transition from portraitist to a serious investigator of the allegorical is a narrative which may not sell as many books as Impressionism or Surrealism but is something that is worthy of deep investigation and thought. Watt’s meditations on the themes of love, life, and final death are themes which cascades through many paintings that now lie obscured by the passage of history.

Fantasy art and the traces of the fantastic throughout art history has always been something of a hobby of mine as the quest for the unreal, while common today, is exhilarating to look at in the rigors of western art. Before knights riding dragons and orcs engages in battle formations, artists developed connections with the unreal which resulted in strange relationships. Drawing from inspirations such as literature and poetry, the symbolists used allegory and cultural tropes to evoke emotion and understanding in both the viewer and creator. Their relationship with the real and unreal was not unlike contemporary fantasy art just with a stronger connection to the transcendental. While contemporary fantasy would become more fantastic and its relationship with the self would become more obscures, the work of the Watts, as well as the symbolists, is an unmissable artifact in arts attempt to reach the divine. Found Drowned is a painting which is simple in its surface qualities. This 1867 painting shows a figure which appears to be of a drowned women taken by a large body of water. While most paintings can develop complexity upon investigation, symbolist paintings almost invite complexity with themes of murder, suicide, biblical allegories, cultural corruption, and environmental hazards stalking its way through dark narratives. The figure of a drowned women is unpacked as victims of industrialized society and serves an an allegory to the monsters of mechanized society. These are the themes which either hide behind Watts paintings or int he case of his later work, rest on plain pedestals asking the viewer to process its meaning or even prompt for meaning. This work would precede the declared intent of the symbolists found in their manifesto written by poet Jean Moréas almost 20 years later:

The Idea, in its turn, should not be allowed to be seen deprived of the sumptuous lounge robes of exteranous analogies; because the essential character of symbolic art consists in never approaching the concentrated kernel of the Idea in itself. So, in this art, the pictures of nature, the actions of human beings, all concrete phenomena would not themselves know how to manifest themselves; these are presented as the sensitive appearance destined to represent their esoteric affinity with primordial Ideas.

While the goals and mindsets of the symbolists are undoubtedly tied to the rejections of the then contemporary art movements such as the Decadents, the quest for the esoteric and ultimate meaning though obscure allegories, symbols, and fantastical imagery. It is here we find Watts working from worker of portraits to a later career filled with deep meaning and understanding. “Whatsoever thy hand findeth to do do it with thy might for there is no work, nor device, not knowledge, nor wisdom in the grave whither thou goest.” That is the inscipritpion adorning the top of of Time, Death, & Judgment (1896) with the conclusion of “He that deserveth the hand shall not sow & he that regardeth the clouds shall not reap” written at the bottom. This painting depicts the three figures, Time, Death, and Judgement just cast as unexpected tribute of Greek art. Time (on the left) carries a scythe but is young and seemingly cut from genetic stone who walks hand in hand with a feminine version of Death with a dress of flowers and a collected assortment of material which according to Watt’s biographer Mrs Russell Barrington ‘is full of gathered flowers, buds, blossoms, faded leaves, all together, fulfilling — her mysterious mission of gathering to herself the young, the old, the middle-aged, indiscriminately.’ Behind Time and Death is Judgement holding scales with a dress that is ablaze in atmosphere offering a finality to the march of both figures. The implied context of the painting added with the numerous directions interpretations is something that both marks the symbolists as a movement as well as for Watts as a painter of myth and idea. On the surface the painting is an evocative image which invites its viewers to decode its meaning sometimes with resonating conclusions and lessons. Watt’s relationship with not only the esoteric but also the contemporary is something which marks his career with reverence and respect. The Minotaur is one of my favorite paintings by Watts though its contemporary meaning is much different than what it means today. Contemporary fantasy is sometimes free of its implications where viewers are entranced with the object without the idea. The Minotaur and the story of a monster which stalks a maze eating sacrifice victims is a fanciful tale but acquires more meaning upon further investigation. The original story of the Minotaur as offspring of a bull and human as punishment for disobeying Posiden becomes more enveloped with its sacrificial story as the people Athens were “compelled by King Minos of Crete to choose 14 young noble citizens (seven young men and seven maidens) to be offered as sacrificial victims to the half-human, half-taurine monster Minotaur to be devoured in retribution for the death of Minos’ son Androgeos.” This sacrifice story is at the center of Watt’s painting and its contemporary meaning was tied to a series of moral crusades by W.T. Stead on raising awareness around child prostitution which led to the age of consent in London being raised from 13 to 16. The image of the Minotaur becomes a symbol of monstrous lust with the image of a crushed bird under the monster’s hoof as it waits with gleeful impatience on a parapet overlooking the sea. Watts was certainly influenced by the issues of his time and felt the call for artwork to illustrates the drama of human life. Rather than paint the moral crusades of the time with flat context, he threw himself in the obscurity of mythology to make sense of the horrors of the world. The Minotaur is not an artist hiding from the grim realities of urban society but one who is making sense with tales of imagination.

Myth, imagination, and allegory is something that runs as recurring cast in the drama which is art. From cartoons, to paintings, to literature, the use of the fantastic and seemingly absurd is a tool used by artists to reach understanding. Watts, and the rest of the symbolists, were in flux and in reaction to the rationalization brought about by the enlightenment and various cultural revolutions of the time. They very much looked at the work of the Romantic painters and even further back with nostalgic wonder at a time when things did not make perfect sense, could not be explained, and still held mystery. Symbolism is a strange movement which ins’t easily explainable in a few articles as its use was sometimes to illustrate and at other times used to evoke the wonders of the unknown. Even if all of this isn’t of interest to a viewer, one still has the fantastic images of Minotaurs, Time, Judgement, and the allure of the beautiful Death.