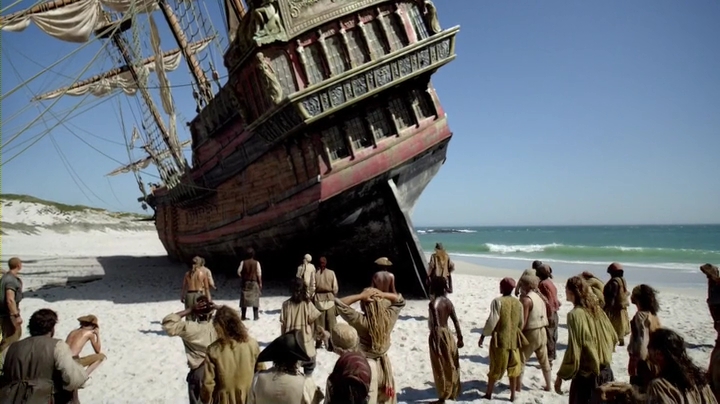 I have always been under the impression that my lukewarm feelings for the Starz original drama Black Sails would change. In fact, if we to go with a sailing metaphor, the winds could alter direction at a moments notice and favorable currents would send us sailing smoothly along. I am not going to make any conclusions here but, suffice to say, the things I disliked about the first half of Black Sails get worse and the things I hoped for went so far over the top that I can’t help but be thankful I am back on solid ground.

If we were to summarize everything that has happened thus far in the story, it would be this: A pirate town lies at the center of interweaving narratives, which sees personal, business, governmental, and existential politics mix unevenly around a grand story arc involving a goddamn treasure ship. That is right, a boat full’o gold.  In my previous articles, I talked at length about pulp versus reality and have just concluded that Black Sails has no idea what it wants to be. While this sounds like a terrible way to conduct a show, which it is, at least it keeps trying. While the show still lingers on power struggles and personal challenges, it also has fucking zombie pirates. You heard me. Zombie pirates on the horizon. Fuck. Everything. Else. These zombie pirates look like tropical vikings, which isn’t as terrible as it seems. Can I please get a show with him as the lead?

The midway point of the show sees most of Flint’s men trying to overtake the crew of the Andromache, which have holed themselves up in some sort of 17th century boat panic room. Tensions and brink mutiny are still at odds while Flint’s men try desperately to get the cannons out of the room before another ship comes and blows them to smithereens. This is eventually resolved with the Andromeda’s slaves rebelling under the leadership of Mr. Scott. Finally. Thank god. Anyway, this is one of the series’ coolest moments including slaves fucking shit up and Flint’s African warriors busting in the other side. The potential for some awkward racial discussion is smoothed over by the evil slave-trading captain getting his eye blown out. Everyone is safe. Well, except for Billy Quartermaster who was lost at sea following a good ol’ heave ho by Flint. Why is Flint losing his shit? Well, he has everything to lose.

For as capable as the show is at doing action sequences, they sure love to hang around poorly executed and uninteresting dialogue. While things are getting fucked at sea, the dust is settling on Nassau, the pirate town where nothing interesting happens. I literally have no idea what is going on with Governor Guthrie’s political maneuvering, partially because she is such a confusing character. Where as Catherine Stark, in Game of Thrones, showed emotion and courage in the face of adversity, Guthrie is either cold and calculating (like when orchestrating the deaths of Vane’s men for the protection of Max, the prostitute) or throwing a teenage tantrum (like when her pal Mr. Scott wants to leave and work on another boat). Who is this woman? I would not keep harping on this point if the show did not put Guthrie as the center of the story. The narrative flows around her as she is the the anchor for these wayward pirates. She is a vital character that is the linchpin for this whole operation. There should be less crying for god’s sake. Can we please get to zombie pirates? Vane’s journey away from Nassau is one of the more redeeming points of the show. With a comfortable arc and struggle, this character is allowed to go through redemption without feeling forced. Vane travels and finds a ghostly tattooed pirate who gives him a crew of slaves, burnouts, and prisoners. Vane challenges big ghost pirate, who is 4 sizes larger than him, and ends up dead in a grave before being resurrected and overtaking said burly ghost pirate. Awesome. You see, that is how you write a show. I want you to keep a hold of this moment because once risen, Vane travels back to the island town and tries to win back Guthrie by taking over the island’s fort. Wait, there is a fort? Where? And why was this heavily important keystone to the island never discussed before? Oh, hopefully no one takes over the invisible death fort to sit inside of it like a pissed off 12 year old.

The dichotomy of pulp and history once again rears its splintered head as Vane’s zombie transformation is never discussed in the conclusion of the series. The show made it quite clear that Vane was buried underground for a few hours but then forgot about that plot detail when trying to reassert normality. If the producers just went all in with the ridiculous narratives then the show would not be caught between a pirate story masquerading as a historical drama. The ending of Vane’s story arc was heading in fantastic directions with the possibility of the show taking history and zombifying all of its inspirations. This would have been silly but still more amazing than a character returning from redemption to the same place as his downfall unchanged. With this tease and disappointment buried underground, we are only left with the solace of a big naval battle somewhere else. Come on guys, there is nothing on this stupid island anyway.

I want to state right here, that despite my continual ribbing, Black Sails has always had potential. If one needed more evidence of this potential, one need only experience the finale. If you remember, the crew is chasing a treasure ship despite doubt and growing mutiny. Flint shows himself to be growing unstable character leading to murder, murder, and more murder. The show comes to a boil when the crew is either faced with firing on what they think is the treasure ship or making Flint pay for his crimes. I am not going to ruin anything but let’s say the crew had a pretty good start before being demolished by the Man O’ war(AKA one of the cannon ships from Mario 3, level 8). Like, completely demolished. This unexpected blowout not only allows for the crew to experience more hardships but it also gives reason for a 3 minute medley of carnage, splinters, and explosion sounds. BWOOOM…SHABLAMMM. I would be lying if I said I was not entertained through the finale. I would also be lying if I said I was engaged with the teetering chaos and tension of the circumstances. This is where the show shines and even sets up for a decent second season. The series ends with the crew stranded on a deserted island in perfect position to overtake the real treasure ship that lay stranded on the other side. Oh shit, its Treasure Island and someone is going to get that gold or hang high.

I am grateful for this entire experience. First of all, I do not get to review television as much as I would like and Black Sails was a fun series to follow with intensity. Perhaps my criticisms are connected to my enjoyment of pulp as I have experienced the freedom and joy of being allowed to experience the abandon of cheap thrills. Black Sails will never be Game of Thrones or The Walking Dead, even as it so desperately tries. What it does have, however, is the potential to be something ludicrous, fun, and utterly exciting.