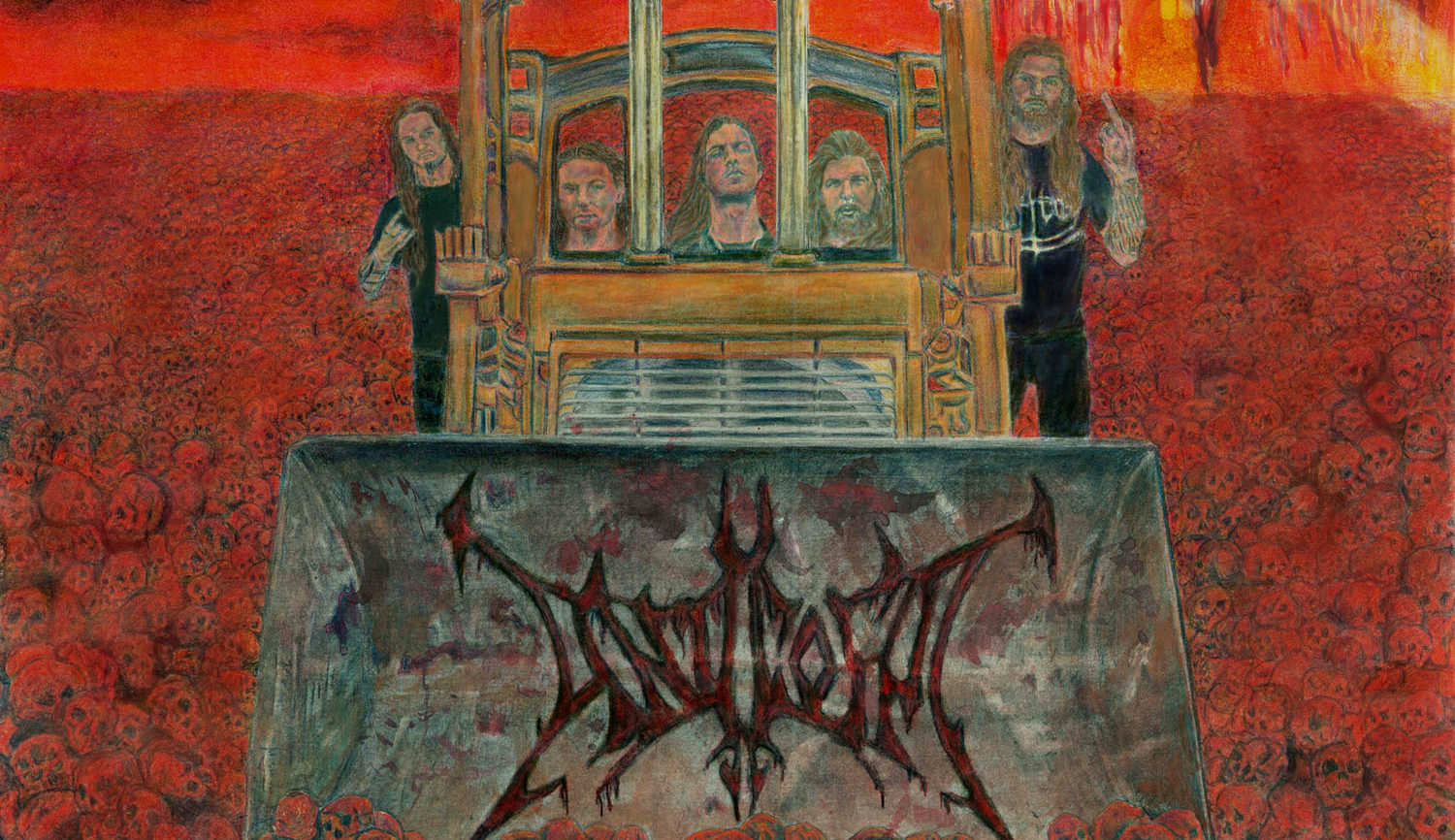 American Black metallers Anticosm have seemed a little bit uncomfortable with the idea of a full-length album since the beginning. Since their first release ten years ago there’s been a whole bunch of singles and EPs, but only one other full length album, 2009’s “Against the Cosmos”. With this, their second and self-titled full album, they’re hoping to cement the image they’ve been forging over the last decade.
It’s a truly memorable bit of album art; the sort of thing you’d find on your fridge if you were raising the anti-Christ, and serves as a clear declaration of their direction. Think heavy, hard and brutal, and try not to think about how three guys drive one bulldozer. Anticosm don’t have time for such petty concerns. The sun’s an elderpumpkin for fuck’s sake, and there’s a field of screams that needs plowing.

Anticosm aren’t fond of subtlety. Theirs isn’t delicate music, nor is it particularly concerned with hidden meaning or finesse. Instead it’s hard, traditional Black Metal, of the oldest school. Think heavy, unrelenting guitars, heavy unrelenting drumming, heavy unrelenting bass, and you get the fucking idea. It’s not the refined kind of music that typically works reviewers into a frenzy, but fuck if it ain’t the kind of thing you find yourself headbanging along to at four in the morning, long after you’ve stopped giving a shit what pretentious wankers like that think. There’s a buzz to it, a dedication to keeping “everything louder than everything else” that mashes it all together; sometimes the manic screeching of a guitar, sometimes thick drumming and always the rasping growl of a daemon with throat cancer.

And then the solos, cutting a jagged line through everything else with the finesse of a band-saw.

In terms of production value, there’s barely any; the electric guitar comes through clear enough, but most of the time the vocals sound like they were sung and recorded in different rooms. It’s bad enough to be clearly intentional, and fans of old school black metal are going to find it familiar. Think old Napalm Death and you’ll have the idea.

What’s weird is the level of clarity seems to shift over the course of the tracks. Sometimes it’d be perfectly legible and sometimes it took on that vague, buzzed quality you get trying to listen to your neighbors arguing; enough gets through to keep you interested, but if you really want to find out why Anne called Phillip a “inconstant dick” you’re going to have to go find an empty glass. Fortunately the vocals barely matter. This is some intense music, and the sharpness of the solos work well with the obscurity of the lyrics pulling your attention just where it needs to be.

If you’re a fan of Black Metal, Anticosm are looking to be a touchstone of the genre, and this is just further proof they’ve got the skills to make it happen.