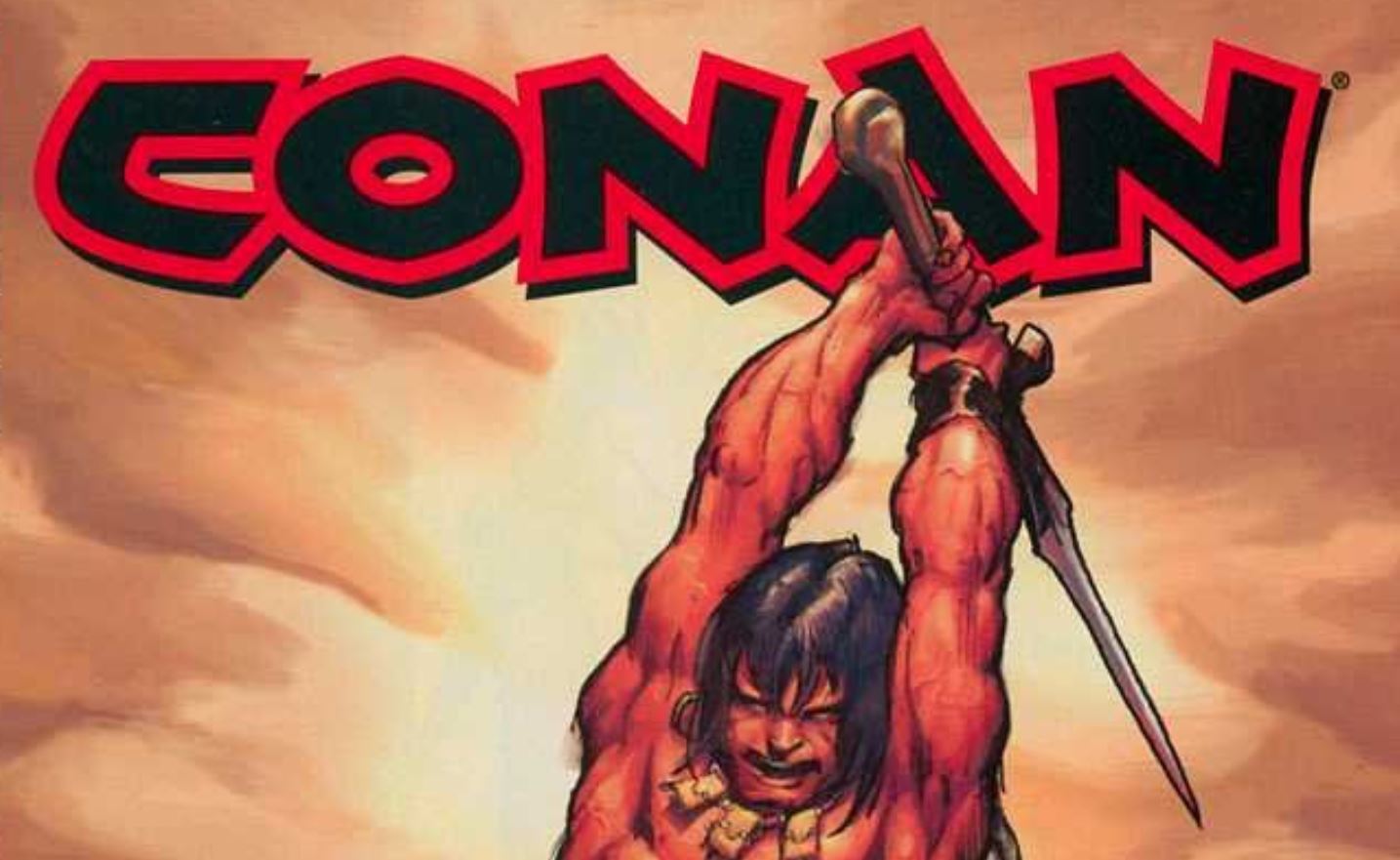 Beginning to talk about Conan makes me want to take a large breathe before speaking. This is because I do not know how much people already know. If you know that this character is a pulp creation of Robert E Howard from the early 20th century then we are off to a good start. If you know that this character was at the center of a world created by Howard and did a large part in developing the sword and sorcery genre then there should be no need to worry. If you do not need reminding that before the movies in the 1980’s, there were various Marvel comics devoted to the adventures of this muscled character done by fantastic talent, then you can just move onto the next paragraph. Looking back on various comic reviews done for Hollywood Metal, I have focused on various iterations of the character, including two runs written by Roy Thomas. Conan the Barbarian and its more violent sibling Savage Sword of Conan were alive during the time when the comic code was still dictating content for its readers. He was molded for different audiences, including both young adults and older, more discerning readers. These comics of the 70’s lead to the development of the movie, which would ultimately cement Arnold Schwarzenegger as the face of the brute savage. Aside from a few cartoon and television appearances, Conan, as a character, would remain dormant until the early 2000’s with the revival of his adventures with Dark Horse Comics being its benefactor.

The Dark Horse treatment of Conan is actually larger than one may have assumed. Beginning in 2003, there have been 5 current runs of Conan including Conan, Conan the Cimmerian, Conan: Road of Kings, Conan the Barbarian, and Conan the Avenger. This does not include various mini series that have appeared on the periphery. The first movement of the Dark Horse chronologies was overseen by Kurt Busiek and still remains the longest of the Dark Horse runs for the character. At 50 issues, this series followed a new timeline for the character, stepping away from previous chronologies devised by Robert Jordan, L Sprague de Camp, P. Schuyler Miller, and John D. Clark. The new chronology follows the Howard stories as they were written and forgoes any incomplete work. All of this pretext leads to the entire first series covering six stories by Howard, with the rest being filled in by other writers. 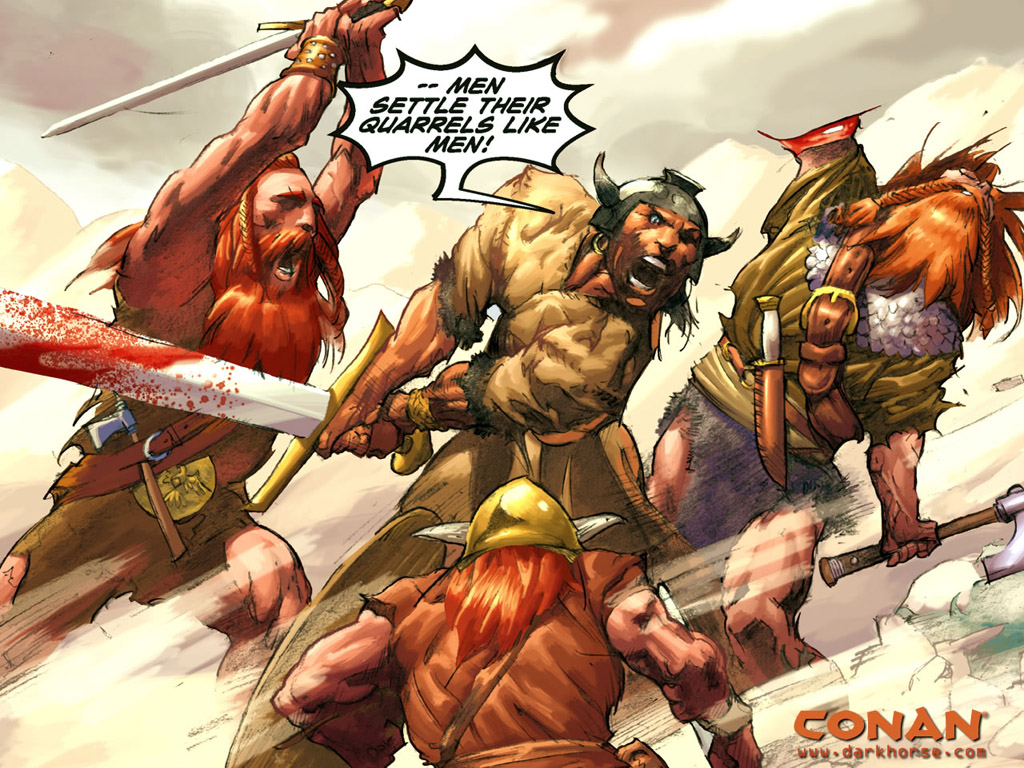 The first 10 issues of the Dark Horse Conan series only touch upon the first, and perhaps most well known, Howard Story, The Frost Giant’s Daughter. The actual tale of Conan meeting a spectral nymph before being confronted by Frost giants is a minor scene in a larger mega-plot involving the Aesir and Vanir in Nordheim. Kurt Busiek’s story details his wanderings in Nordheim, acting as a mercenary for the golden hair Aesir people as they chase down the redhead Vanir of the same country. Conan’s main mission, however, is to see the land of Hyperborea, which lies to the east of Nordheim and to the north of Cimmeria, the place Conan used to call home. He will eventually reach Hyperborea, but not on his own accord, rather through deception by one of the Aesir who was sort of mad because Conan took his woman. Whatever. Conan does what is natural. Conan soon learns the reality of Hyperborea as a gleaming city full of all of the wonders told in tales, but at the expense of an underclass that serves the elite with both servitude and life essence. Conan’s first impressions of Hyperborea are cut short by the fact that his allies, that were captured with the women he just fell in love with, are enslaved along with his dreams of a perfect nation.

The interesting things about the Dark Horse comics, along with most Conan adaptations, is the revision and creation of lore. Howard never really wrote of anything dealing with Conan in Hyperborea. It was merely alluded to in various places and all of the scattered stories saw Conan in other areas, like everywhere else besides Hyperborea. The creation of the Conan genesis is just another one of the many reconstruction of the character that try and give motivation to a figure who has sustained on patchy legends. Kurt Busiek’s reconstruction of the new timeline does a tremendous job of using the original stories as pillars to new tales. The God in the Bowl is the next original story, which does not make an appearance until issue 10.

One of the most iconic aspects of the Dark Horse run is the art. While classic names such as John Buschema and Barry Windsor Smith have added art to Conan’s image, Cary Nord’s painterly style, along with Dave Stewart’s colors, bring the violence and drama to life. While still intended for an adult audience, Nord and Stewart’s art is vivid in all of its blood, nudity, landscapes, and magic. The art for the Darkhorse comics is very important, as these tales have become so ingrained in culture that their retelling and reconstruction is vital to its presentation. Dark Horse makes this feel new. While I only cover the first 5-10 issues, the entire series is held together by a core group of talent who seem to care about the preservation of Howard’s character. Oh Krom, there I go again. I could talk about Conan until the Vanirs come home. The amount of material that has come after so little original material is fascinating. Also, the level of detail that one can get into is almost similar to Tolkien in its attention to detail and the amount of immersion offered. Darkhorse would continue this series for 51 issues before breaking off into 4 more shorter series. The fate of Conan seems to be initial excitement and then a fleeting interest in his adventures. I will be here, however, just waiting for more chances to watch this Cimmerian fuck things up. 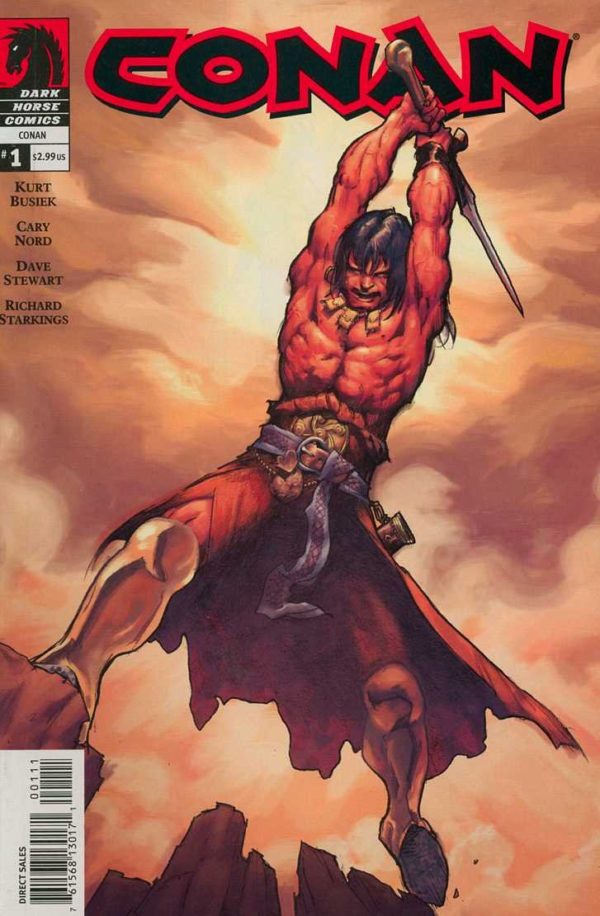