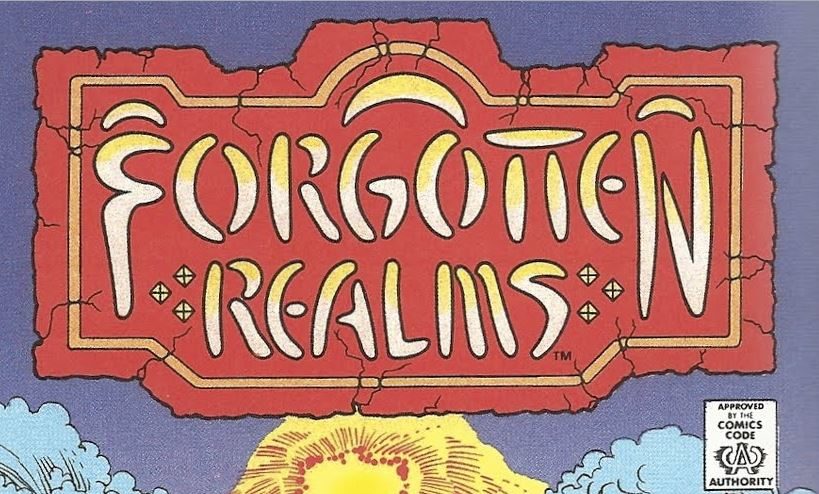 Alright. We have reached Forgotten Realms. Though all fantasy is pretty much in the same neighborhood, I feel certain places are way further than others. If Game of Thrones is here, then Forgotten Realms is way over fucking there. Yeah, you see that castle in the distance surrounded by swamp hydras? Yeah, beyond that. When explaining fantasy, I try to imagine I’m trying to explain it to someone who has no grasp of fantasy and is quickly losing interest. Oh, a more realistic fantasy story with lots of action and politics? Sure. Oh, a..wait…what? Is it a novel or a game? Who is buying this?

Forgotten Realms is a campaign setting for the role playing game Dungeons and Dragons. Though somewhat early in the game’s history, settings like Greyhawk and Black Moor predate Forgotten Realms by almost a decade. A campaign setting for those who are giving me that confused look is a pre-made world that people designing the campaign (aka dungeonmasters) can use for their own personal RPG adventures. Think of it like World of Warcraft, just offline and done with pen and paper and around a kitchen table with no playable interaction with that other group of adventurers down the street. Campaign settings are popular and Forgotten Realms was such a hit that various media was spun off it using the world as inspiration. Either that or it was used in tandem with a myriad of marketing tools. Whatever. Video games like Baulder’s Gate and the novels by R. A. Salvatore have all helped make Forgotten Realms an almost real place. The collaboration and excitement from players and designers allows this place to be a living breathing thing that unfortunately had a comic book based on it. Listen, they can’t all be good. Literally what is supposed to be running through your head during combat.

The Hand of Vaprak is the first narrative arc for an unlikely group of adventurers. Priam Agrivar, a paladin, uncovers a mysterious and magical hand. This artifact eventually leads him right into high adventure with a warrior elf, a wise-talking halfing thief, an exotic female swordmaster, a dwarf trapped inside the body of a golem, and an eccentric wizard who pilots a boat looking for adventure. Forgotten Realms is literally the introduction to campaign adventure where motive, action, and reason is driven by a constructed path. Sure, you could stay in town but searching that cave could be really cool. The characters in Forgotten Realms are so closely aligned to their role playing archetypes that hilarity starts to ensue when the narrative starts to move forward. I did mention that I love reading this right? Okay, making sure. Now on with the disaster.

Forgotten Realms has the very complicated task of bringing a densely constructed world to an audience who may not be completely down with all of these tabletop shenanigans. Beneath the gentle facade of fantasy is a complex system of marketing, imagination, and world building where dozens of factors are constantly in play. The story not only has the responsibility of selling the world but also making sure everyone knows exactly what is going on. The story also has to be believably set in the world without invalidating anything else that is happening in campaign books and novels. How does one do this? With the grace of an elephant on a escalator. The characters loudly announce their actions and try to shoehorn at least one dungeons and dragons mechanic into every battle. Instead of the wizard casting a burst of energy, he has to enunciate the spell name as if this whole thing is a product placement in a movie. Despite Forgotten Realms trying its very best, it would be impossible to view this series as anything but a hilarious stumble fuck through a world of fantasy role play come to illustration. I am going to cast detect magic. Watch out. I’ll hit him with magic missile. What adventure isn’t complete without a smart ass halfling that fucks up constantly only to save the group in the final hours?

The Hand of Vaprak brings the reader, or hostage, along on a short adventure through shadowdale and Baluder’s Gate to meet a brief cast of characters all clawing after this, well, claw. On one side you have a very willing team of level 1 characters and on the other easily bested level 1-3 enemies. The Hand that is being sought after supposedly belongs to Vaprak which is an actual god in the pantheon of giants created for the Dungeons and Dragons universe in the early 80’s. Of course nothing is going to be changed dramatically in the arena of deity relations but it was nice of them to pay attention. Each protagonist exists to not only drive the plot but showcase a brief introduction to the character. Paladins heal. Wizards cast lightning bolt. Ever want to know the actual effects of charm person? Fear not, because when Ishi Barasume is charmed by Gornak, we are reminded about the movement abilities of a charmed attacker. Well, of course I can cast magic with this armor, my cleric’s powers come from gods rather than incantations read from a book silly. Oh, it is also important to note that if you have played any version of DnD or Pathfinder all of what I am saying is as fun as hell to read. Not good. Just really goddamn fun. Forgotten Realms, despite its clunky narration, has personality. The art was done by a combination of Dave Simons and Rags Morales. For all intents and purposes it looks like a standard late 80’s DC comic jut with supplemental material in the back. The original series came with stat blocks for key characters, urging readers to add them into their own game. Do you like Dwalimor Omen? Did you know he has an armor class of 4? No, a lower number was good. You see it wasn’t until 3rd edition where they changed. You know what, I’ll just come over later and explain. The intended success and interactivity between this media and the larger Forgotten Realms campaign contrasts sharply with how much of a failure, at least in hindsight, the series became. If I were to guess why, it was probably because the series was over encumbering for people that just read comics and too pedestrian for people that really liked RPGs. The grouping of both of them feels awkward with no real interest paid to either side. Now look what you did, you pissed off both groups.

After the Hand of Vaprak is returned, unsurprisingly, the team of unlikely adventures get caught up in more high adventure before having their series collapse in utter hilarity. The story lines for Forgotten Realms became sillier and at one point there is a Lich King looking for a bride. The tone of the DC series became less engrossing and seemed to fall more in line with zany superheroes. This all was happening around the same time as the DnD Avatar crisis, which was a big event in the Forgotten Realms universe. Forgotten Realms, the comic, is better left in the closet of time unless you already know what I am talking about and would love to use these for a novelty experience.