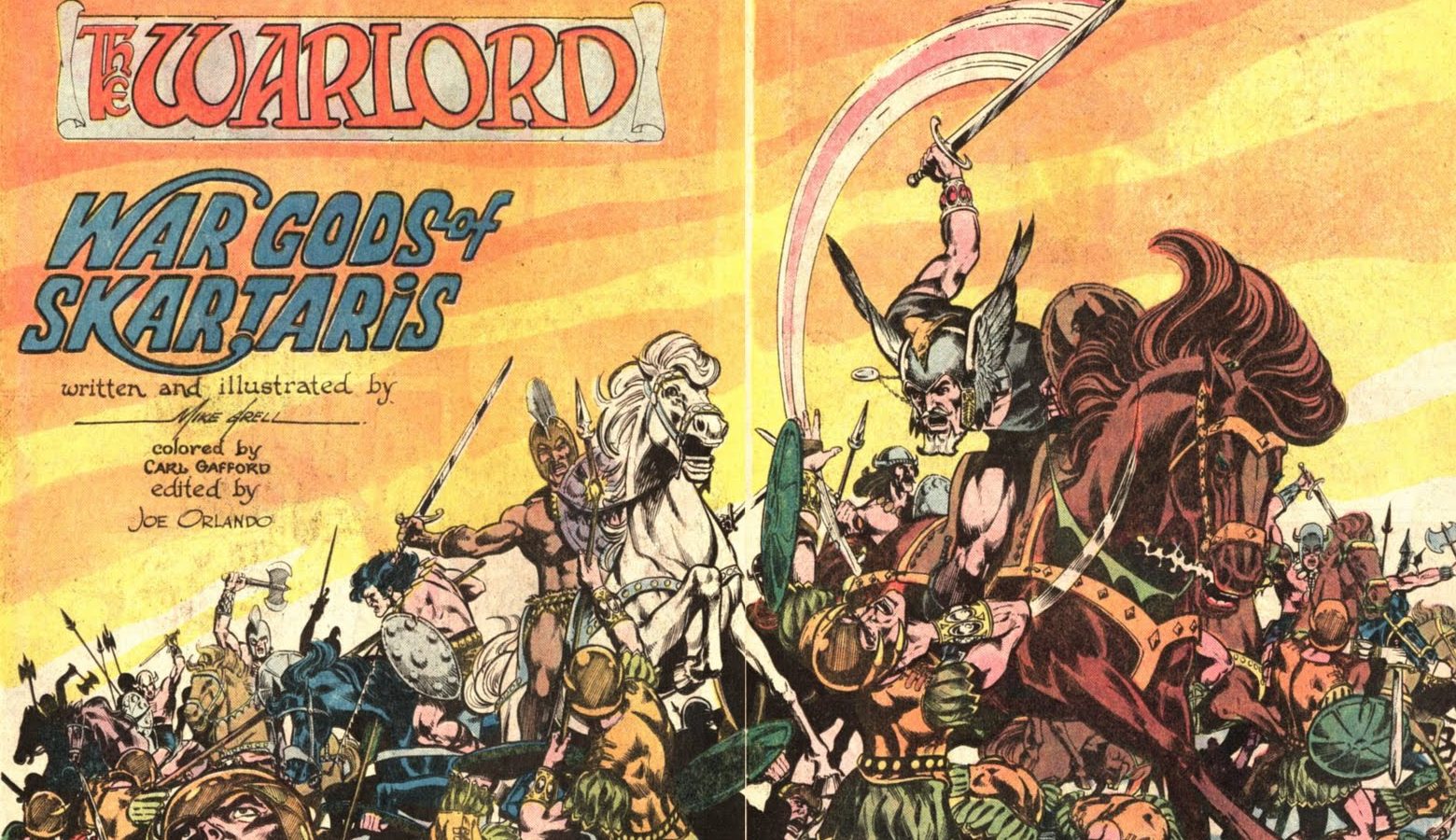 Let us just preview what Warlord is all about. Huh. Fighter Pilot gets shot out of the sky. Alright. Plummets through the center of the earth. Sure. Arrives in a mythical land where prehistoric beasts, pirates, half naked women, and wizards all have crazy ass adventures. Yes. I am already on board with this and this is just the first page.

Warlord came at a special time when just about anything could be done with comics. Before things became dark and gritty for young adults, comics in the 1970’s were still fantastical and made for teenagers. Well, okay, maybe some really cool young adults. I do not know what happened, but a dinosaur pirate wizard does sound pretty fucking cool. Warlord is a part of the DC comic universe and, in fact, appeared as a side adventure in the Flashpoint crossover event where our soon to be introduced hero battled Deathstroke in a High Seas adventure. I can hear you groaning now. Have no fear because besides this little modern inclusion, Warlord pretty much lives in his own world at the center of the earth riding dinosaurs.

For those of you taking notes, Skartaris, the place where all of this crazy shit is happening, is a land lying at the center of the earth. This notion of a hollow earth is not new, as it is a part of a sub-sub-genre of fantasy called Hallow Earth. Hallow Earth stories started in 1741 in the satirical piece of Niels Klim called Underground Travels, but was made popular by Edgar Rice Burroughs with his Pellucidar series. Hallow Earth works in the same way as planetary romance, in which the protagonist finds himself stranded in a pastoral yet deadly setting. Warlord, at its most conceptual roots, is a pulp story dressed in a superhero disguise. But really, the two are intertwined. I am guessing this would really be Sword, Gun, and Sorcery since the creators have no qualms about shooting primitive villains.

Warlord, or Lt Colonel Travis Morgan, has found himself in the center of the earth. Fear not because one panel is dedicated to the science behind the center of gravity being in the mantle so that is why two worlds can exist. Science. Now let’s get back to dinosaurs. Morgan soon finds himself at the center of high adventure and perilous danger pretty much for his entire 133 issues down in the center of the earth. At first, it was just about running from a powerful sorcerer named Deimog and saving a scantily clad Tara from a reptile monster, AKA huge fucking dinosaur. Morgan and Tara find themselves on the run from Deimog and his followers right into the arms of a whole batch of silly adventures. Morgan becomes known for his savagery and reputation by punching mythical creatures in the damn face. Since coming to the center of the earth he has found himself:

Somewhere in there Morgan, equipped with a badass wing helmet, saves Tara and momentarily defeats Deimog in a duel. Sounds good? Yes, Sure. Probably just a series of one off adventures? No? How about Atlantean mythology crossed with Hallow Earth? Skartaris, the inside of the earth, was eventually discovered by the Atlanteans in their quest to find a suitable homeland after the prophesied downfall of the land. Atlanteans moved in and everyone was happy. Skartaris worked out peachy because, for some reason, no one slept or aged and advanced light years in culture and civilization. Everything was fine in Skartaris until nuclear war broke out, not only destroying part of the world but triggering a de-evolution into a prehistoric state. Some men became beasts while others became reptiles. Holy goddamn fucking shit. Alright I am totally on board. This again is all taking place on one very informative spread.  As already mentioned, Warlord takes place over a very long stretch of time. Not just in terms of actually history but by publication length. The first arc of Warlord ends with Morgan, AKA warlord, AKA wing helmet, finding out the history of Skartaris via mega computer built before the fall of civilization. Then we find him fighting some wolves and then, for some strange reason, getting onto a bullet train. The bullet train separates him from Tara and sends Morgan speeding home to meet a bunch of scientists. You guys will not fucking believe this story. It is important to note the striking similarity between an ongoing RPG campaign and the Warlord comic. What follows in the issues are a connecting plot and always a chance to punch a creature in the face. Seriously, there is a lot of punching of creatures. Perhaps one of the funniest aspects of the first issue is Morgan punching an unsuspecting Satyr after he tries to woo Tara with his pan flutes. What I just said just made me laugh hysterically with excitement. Fuck you Greek mythology. Needless to say any large plot is sort of gone after the first few issues of Warlord and things get really fucking weird.

The world of Warlord is impressive in its ability to entertain and be absolutely ridiculous. It is the equivalent of dressing up in cardboard battle suits and then fighting with silly string whilst making spaceship noises. That charm preserves many of the pulp elements, which speak of a time before the rise of high fantasy. Mike Grell, the series creator, did work on Weird War Tales, a supernatural military series, before the creation of Warlord, which not only shows his penchant for genre bending but also places him into things that Kaptain Carbon adores. Though the writing may be a little flat, and the character development pretty much set on a fixed course, there is something about that winged helmet that no one can deny. 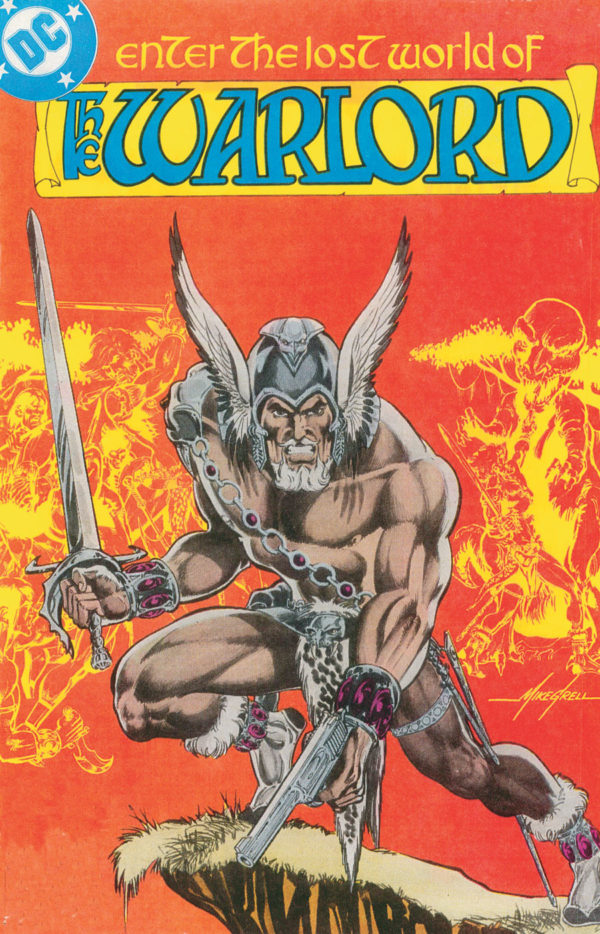