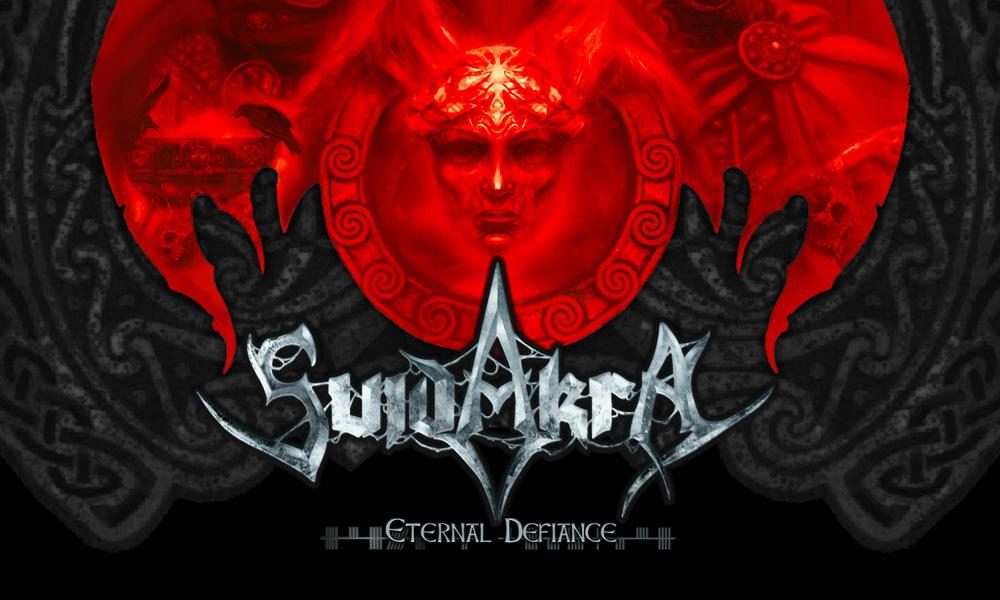 Suidakra’s eleventh studio album, “Eternal Defiance”, opens with a thunderclap that gives way to regal horns, strings and militaristic drums. It’s the sort of music that I might have mistaken for the “Game of Thrones” theme song had I been less informed, and when this initial musical statement fades into the sounds of a battle I feel like I’m listening to audio from a sword-and-sworcery period film. It’s a striking artistic declaration, and sets a tone that the band, to their credit, maintains for the entirety of the album.

“Eternal Defiance” is a Rock Opera that chronicles the rise and fall of a young warrior who apparently is based on Roman Emperor Magnus Maximus. In their quest to bring this story to life, the band trots out just about every Fantasy Metal cliché you can think of. Bagpipes dance over palm-muted guitars as they join drums in tight march rhythms, a wash of synthesized horns and strings provide a suitably grandiose backdrop for the three vocalists as they spin tales of wartime glory, and you better believe there are acoustic ballads. However, while it’s all very extravagant and skillfully arranged and performed, it more often than not feels very commonplace. The chord progressions are all very tonic-centric, almost every song has a one-note breakdown, and I swear I’ve heard the gradually harmonized string stabs in “Defiant Dreams” in about a million other pieces of music. Even the album’s imposing opening declaration feels all too familiar. The banal music is then presented in a package of lifeless, brickwalled production which does not help matters at all.

Additionally, I find the lyrics to “Mindsong” to be silly rather than touching, the synthesized orchestral instruments are too obviously fake for my liking, and I was not a fan of Tina’s vocal style when it was being utilized by Joan Jett and Pat Benatar. And while the band’s zealous dedication to their musical vision is impressive, it’s also a little alienating. I can’t help but feel like the band is speaking to an audience that I am not a part of, like maybe people who are fanatics for the aforementioned T.V./book series or who play a certain easily-abbreviated role-playing game… or who just really like Folk Metal. No judgments here.

That said, there are individual moments on the album that I enjoy, like the chorus of “Beneath the Red Eagle”, the delicate instrumental section that precedes the vocals in “Damnatio Memoriae”, and many of the rich vocal harmonies. In fact, for the first couple of songs I’m more or less on board, but the band just cannot keep my attention. Ultimately, this album is just a collection of things that I’ve both heard before and would rather not hear again.