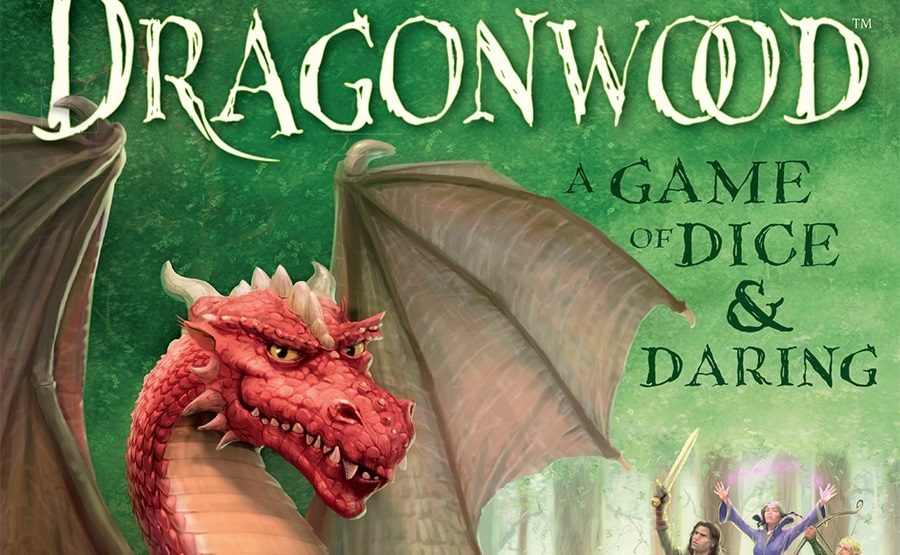 A deep-seated regret I have in life is missing the boat on Magic: The Gathering. Unlike most D&D players, who seem to have an automatic knowledge of MTG, I have not yet learned how to play this most epic of fantasy card games. Granted, my D&D career was short-lived (5th-8th grade) but I still feel like I missed a turn somewhere. Now that I follow Kaptain Carbon on Instagram, that deficiency is thrown in my face nigh on daily. (The Kaptain is at some Magic Grand Prix event in D.C. as I write this… of course.)

Now you may be asking, what kind of solipsistic and self-centered review is this? Why don’t you just shut up and learn MTG? Isn’t this an article about Dragonwood?

Dragonwood entered my life last week when I saw a mischievous red Dragon with a condescending look peering at me from the counter top at a friend’s house. This is not exactly the place where I would expect to encounter Vermithrax , but who am I to complain? Their 9 year old daughter, whom I’ve known and babysat her whole life, was diving into the game directions and looking for help. It was here, and with Dragonwood, that I decided to begin the quest to conquer my aforementioned deficiency in the area of fantasy card games.

Game components: A set of red cards called the Adventure Deck. A set of Green Cards called the Landscape Deck. And six, six-sided die (d6). However, the numbers on the dice only go up to 4, with 2s and 3s each repeating.

The Landscape deck consists of ENHANCEMENTS, EVENTS, and the CREATURES the players will soon battle to acquire points. There are two dragon cards in the landscape deck and at the start of the game those are to be shuffled into the bottom half of the landscape deck to prevent their exposure too early in the game. When the cards are ready. Five landscape cards are dealt face-up on the playing surface with the remaining deck adjacent. This is the current landscape.

The Adventure deck is comprised of five suit colors numbered sequentially featuring a cast of adventurers:

To start the game, the landscape is prepared as described above and each player is dealt five adventure cards which they are to keep hidden from other players. The object of the game is to acquire points by targeting and defeating creatures within the Dragonwood landscape. The creature cards have associated Victory Points as well as 3 numbers indicating what it takes to beat them in attacking method chosen by the player. To capture a CREATURE card and gain the victory points a player must choose a method of attack based on their adventure cards. To STRIKE at a creature a player must present one or more cards numbered sequentially (any color). To STOMP, a player must present cards that are the same number (again, any color). To SCREAM, a player must play cards of the same color. The number of cards played determines the amount of dice the player can roll in their attack against the chosen creature target. A three card strike would allow the player to roll three dice, for instance. If a player achieves the number indicated on the creature card for the selected mode of attack, they can take that creature card into their victory pile. The cards used in the attack are then placed in the discard pile. If a player fails to achieve the score needed they must discard 1 card from their hand as a penalty. (The game directions did not specify if the card to be discarded must come from the attacking cards or any card within the players overall hand. Thus, we played that any card could be discarded so as to keep the attacking cards intact for the next hand.) When cards are captured from the landscape the vacant slots are replaced from the remaining landscape deck. If an EVENT card is revealed that event must transpire immediately. Instead of attacking a creature card on their turn a player can choose to capture an ENHANCEMENT from the revealed landscape cards. Capturing works the same way as with creatures including the discard requirements. Players can use their captured enhancements on subsequent attacks to boost their effort as indicated on the card. Some enhancements can be used for only one attack, others can be used in perpetuity for the remainder of the game.

On each turn a player can choose to capture or draw an adventure card. A maximum of 9 adventure cards can be held at a time. If a player draws with 9 cards they must discard immediately. Play continues until both dragon’s have been slayed or the adventure deck has been played through twice (reshuffle discard pile to reset). When the game ends the player with the most Victory Points wins. The orange dragon is the tie-breaker.

Once we got the hang of it, our games lasted ~30 minutes—which I found to be ideal. It allowed for multiple quests through Dragonwood within “game time” and created a natural reset if one player got on a hot streak with the dice and started running away with a points lead. (The Royal anyone?) There are a couple other nuances to the game mechanics. For instance, there are guidelines on how to prepare the landscape deck and some modifications based on the number of players, but the above captures the essence of the game. (Full instructions here) In our experience, playing with everyone’s cards face up (so as to assist younger players) did not detract from the gaming experience. If I had my druthers I might have raised the capture threshold for some of the cards, including the two dragons. At times, slaying a dragon felt a little easier than it probably should have been. Raising the capture values may have also allowed for standard numbering on the six-sided dice. I would have preferred to use d4s for nostalgia’s sake otherwise. I note however, it is likely that I haven’t played enough games yet to understand why these decisions were made.

Dragonwood is an entertaining game that strikes the right notes for the high fantasy genre and does so in an all-ages format. We’ll be playing this many more times and checking out some of Gamewright’s other titles. Perhaps someday I’ll be worthy of Kaptain’s game night table.