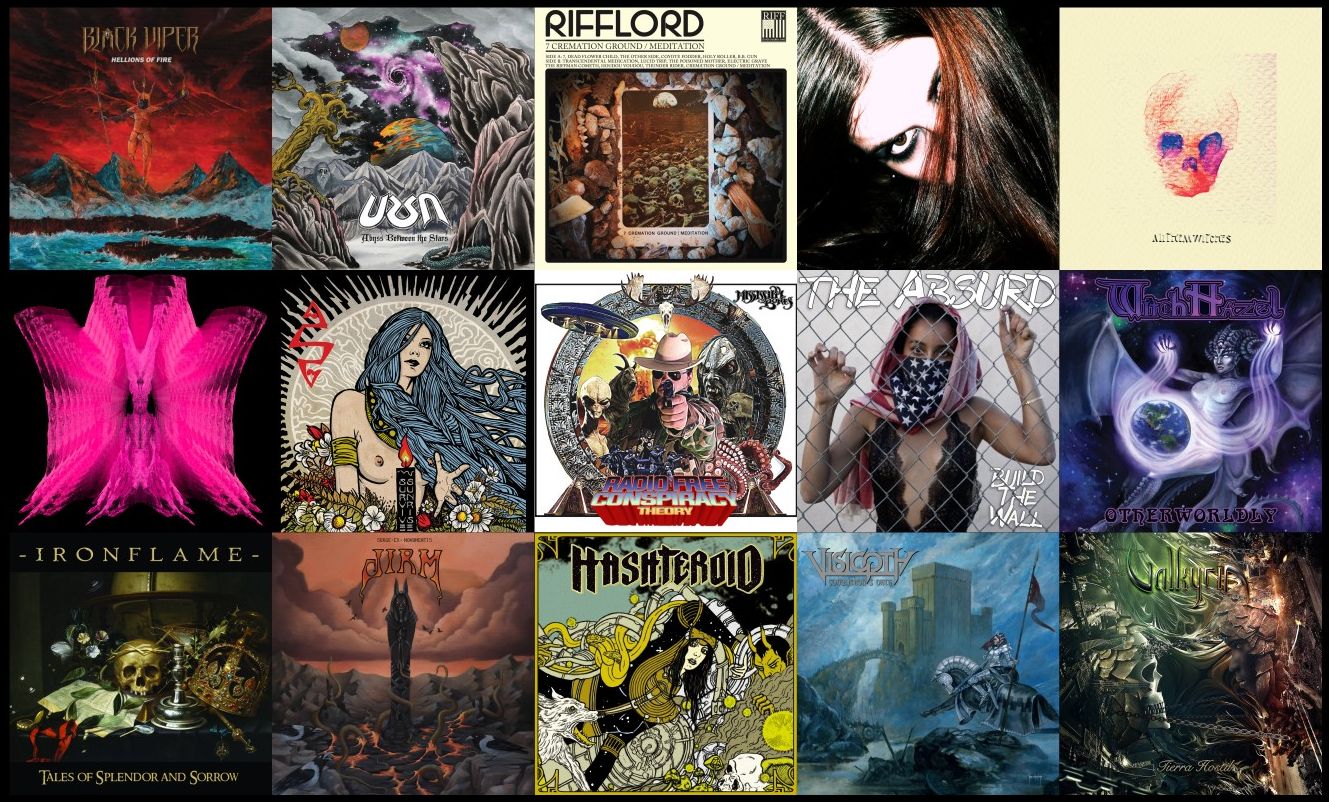 Writing end-of-year lists is a cumbersome, but truly gratifying endeavor, I think, as it allows me to revisit a whole year’s worth of wonderful music releases, some of which have fallen unjustly into the cracks of consciousness or vanished from the general rotation radar. It’s a journey of joyous rediscovery unearthing musical gems that I’m excited to share with whatever audience that may be reading this. Only bummer is having to leave so much great stuff off the list. I could make one twice as long, but I have a life, you know. On that note, here are my personal 25 favorite albums of 2018:

Occult rockers Witch Hazel have so much going on across the album’s eight killer tracks. I hear Sabbath, Pentagram and Cathedral and some 80s leanings as well as keys, flute and even horns blending in with the 70s hard rock topped with school-of-Ozz type vocals. A classic taste, but with a twist making it fresh on the palate.

Straightforward, but flawlessly executed and with great attention to detail, this bluesy desert stoner goodness will make your morning coffee taste heavenly. It did mine.

On this impressive release Italian prodigy Valentino Francavilla transcends the 80s metal homage format with formidable guitar wizardry, a beautiful clear voice, memorable songwriting and polished production. Heartily recommended for fans of Riot and lovers of pure heavy metal at large. Props to Kaptain Carbon for bringing this guy to my attention.

A late entry on the list, but one I had to include, Mama Doom are all about killer metal riffs and the exceptional vocal stylings of frontwoman Heather Salamone whose outstanding voice switches from dark allure to banshee howl in the bat of an eye and won me over just as fast.

21. King Witch – Under the Mountain

Well worth the two year wait, this album meets all expectations set by the King Witch debut EP. Once again the crushing, meaty doom songs are borne on high on the siren wings of Laura Donnelly’s powerful vocals. Epic!

Killer old school speed metal from Norway that’ll make you lose your shit and break your neck. Very melodic and varied and topped off with insane guitar solos and high-pitched wails, there is never a dull moment on this impressive debut.

Take an acid trip down this occult hellhole of horror and musical madness. Lurid and nasty in the best of ways, this utterly intoxicating bluesy doom experience will make you an addict. The lo-fi sound mix only adds to the gnarliness. Smoke kush and give your body to the Dark Lord.

18. Apostle of Solitude – From Gold to Ash

Starting off with an uptempo instrumental banger reminiscent of early The Sword, this album soon settles down into more gloomy doomy territory and stays there for the duration. Songs are memorable, executed with skill and feeling, and sprinkled with excellent clean vocals. Beautiful album!

17. URSA – Abyss Between the Stars

Atmospheric sounds of epic doom conjure up visions of frost giants clashing in icy wastelands and wizards summoning ancient demons from beyond the void. Gargantuan guitar riffs and drum beats come crashing down like boulders spewn from primordial volcanos erupting. URSA end their tall tale on a surprisingly bluesy, but no less epic note reminiscent of Theme for an Imaginary Western by Mountain (fittingly, the song is called Mountain). Something truly special.

Instantly captivating, constantly surprising, and emotionally stirring, this proggy technical stoner metal connects like a punch in the gut. Radiant Knife switch effortlessly between headbanging riffs and dreamy soundscapes resulting in a wonderfully rewarding ride that drew tears from my eyes. I cannot recommend this enough.

Before you hit play on this one, turn up the volume and prepare for a shot of pure balls-out adrenaline straight to your brain. Aptly named Hashteroid marry stoner riffs with punk rock aggression and speed metal overdrive resulting in a true ripper of an album that never slows down, not even on the inevitable ode to the old sticky icky, Green Caramel. In their own words, Hashteroid are here “to melt human faces”, and they do.

With a moniker straight out of the Generic Stoner Band Name Generator, Rifflord forced me to reexamine my personal biases, because this album is inventive and dynamic as hell. Fear not, these guys have lordly riffs aplenty, but it’s the way they spice things up with psychedelic keys, woodwinds, voice samples, sound effects and what have you that makes this album a truly rewarding experience.

You’ll be hard pressed to find heavy metal more true than this. Visigoth wear their aspirations on their sleeve and they are to live, love, slay, and be content. If these songs don’t make you wanna draw your sword and charge into the fray on your mighty steed, you may want to check your pulse. A triumphant album of metal as pure as molten steel!

For some reason, previous outings from these Swedish trad metallers didn’t really do it for me, but Nekromant hit the nail on the head with this one. Sabbath worship has rarely been done better, which absolutely hinges on the band’s ability to write original riffs and huge juicy hooks. Hail Nekromant! Praise Iommi!

10. IRONFLAME – Tales of Splendor and Sorrow

Ardent traditionalists IRONFLAME pull out all the tricks in the power metal guidebook with panache and flair, but this is no cheesy tongue-in-cheek genre tribute. Excellent musicianship and accomplished songwriting combined with heartfelt passion for the genre makes this release one of the very best power metal albums of 2018.

Canadian metal is on a roll with bands like Unleash the Archers, Skull Fist, Cauldron and Striker, who released their sixth full-length this year. Striker churn out classic 80s heavy metal songs that sound like they could have been lifted from the soundtrack to Transformers: The Movie, but Striker avoid all cheesiness with barefaced honesty, musical chops, glorious production value and exceptional songwriting skills. Brings a big-ass smile to my face 🙂

These four Aussie sisters drop an amazing amalgamation of stoner, metal, heavy psych, folk rock, and pop. Hell, you can even dance to it! An essential album that I’ve listened to countless times since it came out. I’m expecting these girls to blow up mainstream any time soon!

I’d never heard of Jeremy Irons & the Ratgang Malibus and would probably have written them off as some novelty outfit based on the ridiculous name alone. But when I stumbled upon the utterly amazing song Candle Eyes from the band recently renamed JIRM, I was in awe. Being the first track released off the album, I had little hope that the rest could match it. Suffice it to say that my doubts were put to shame. Is it psych? Stoner? Prog? Space? I’ll be filing this album under stirring, powerful, incredible music.

Bands who play ten times as loud and aggressive should count themselves lucky to convey even half the emotional output that alternative psych rockers All Them Witches deliver. No two records they put out are the same, and ATW is another powerful testament to the gravitas of this awesome band. The tempo is turned way down on most songs, but to great effect, allowing them to creep slowly in and nestle up under your heart.

Old-school doomsters The Skull return with a grand collection of songs that exude dark, tragic romance and will make the hairs on your arms stand up. Aside from the heavy-ass riffs, the somber and dignified voice of Eric Wagner (formerly of doom metal legends Trouble) may be the band’s greatest strength and imbues the superbly executed album with an air of utter majesty. Absolutely exceptional release!

4. The Absurd – Build the Wall

These guys are obviously L.A.’s best kept secret. On their second single, The Absurd blew me away with their searing punk guitar, melodic hooks, poignant political lyrics and aggressive sound – happily, the full album didn’t disappoint. Build the Wall is a string of raucous, but instantly catchy grunge songs with a clear message and a firm middle finger to the fascist agenda rising in America. Play this loud at the skate park and stick it to the man!

One of my favorite bands is fortunately also incredibly productive. For their ninth release in as many years Mississippi Bones drop the concept album they’ve been destined to make, still sticking to their signature Southern stoner rock sound wrapped up in witty wordplay and catchy choruses courtesy of frontman and pop culture savant Jared Collins, but separating songs with lengthy interludes. The radio drama format may not be ideal for working out or backyard barbecues, but Radio Free Conspiracy Theory is an incredibly detailed and engaging feat of shared world-building and political commentary for the ages. And yeah, it kicks ass, too. Now, how’s that coffee-table lore book coming along, guys?

Spanish metal label Fighter Records release some excellent stuff, but their finest hour yet has come with this sophomore album by Valkyria, which to my ears is nothing short of power metal perfection. On Tierra Hostil, the band strikes a delicate balance between polished production and raw metal, fusing catching melodies with galloping riffs and soaring Spanish vocals. Songs like Abatido give me the feeling of standing at the helm of a majestic galleon charting a course for the New World or a giant spaceship boldly braving the cosmic void – you know, that instant rush of endorphines that epic music can give you. Valkyria even master the art of the power ballad with Selenelion being one of the best cuts on the album. Don’t be deterred by the Spanish lyrics – the feelings this album will invoke in you are universal.

Their album no. six was my introduction to these North Carolinians (late to the party, I know), and for the first few listens I wasn’t really sure I liked it very much. But ASG was a name thrown about in stoner rock circles, so I knew it had to be something worthwhile beyond the beautiful cover art. And suddenly it clicked. Big time. Survive Sunrise is a work of brilliance, both straight-forward and highly complex. All thirteen songs are of the radio-friendly three to four minute variety (no half hour mind-trip excursions here), but each and every one is rich with sonic invention and deeply detailed, constantly changing and evolving, surprising you at every turn. The lyrics paint vividly colorful and darkly surreal images that beckons interpretation. On Survive Sunrise, ASG transcend the alternative metal sound and turn it into a vehicle of unbridled artistic ambition. Mind blown.