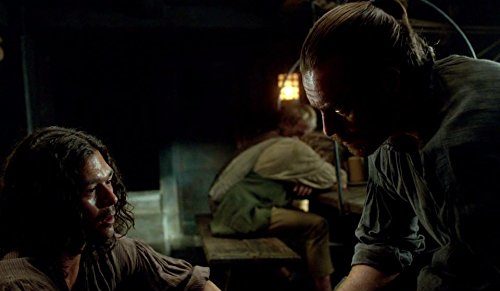 Even though I am dismissive about large swathes of the Starz show Black Sails, this does not mean it does not have the possibility to ensnare attention. By the first couple episodes of the second season, the characters, in all of their misadventures, become comforting if anything because they never change. What evolution occurs, does so glacially, which means large surprises almost never happen. When surprises do happen, they occur only to minor characters. This differs from shows like Game of Thrones and The Walking Dead where major characters will undergo catastrophic changes, like death and dismemberment. Black Sails is somewhat different, as its primary cast is insulated from any major changes. This could become different in future episodes, but I noticed this during one of the more surprising turns of the season if not the show. One of us isn’t leaving this episode alive…no spoilers.

Ned Low was introduced at the beginning of Season 2 as the archetypal villain, who would overshadow lesser villains, giving people a reason to rally. Low’s introduction was so routine that it was almost expected for him to be the centerpiece of at least an entire season. I had terrible visions of him terrorizing Guthrie all season until either Vance or Flint came to her rescue. This happens for a bit but its extremely truncated when Vance decides to decapitate Low after subtly threatening him in town. Holy shit, really? Already? This immediate vanquishing of Low was unexpected and jolted a sense of pulpy danger in a plot that was setting on a course of stagnant predictability. Though some can argue that Low’s untimely exit was expected, his establishment as the arch villain would be more boring than anything else. This choice by the writers pushes the show into a level of pulp where characters are brought in, raise a fuss, and then get killed off. This reliability, and sometimes invincibility, of the main cast gives hope that these characters will encounter ever more ridiculous antics with near impunity.

Next on our list, what is happening with Flint and Silver? Well, they are on the boat and Flint is trying to get back his crew while Silver is making himself useful by being the gossip network during lunch. Flint warns Billy Bones not to trifle with other boats, which turns into a challenge, which turns into a blood bath when Bones tries to trifle with other boats. This small incident leads to an interesting dynamic that is never explored with Flint’s experience and guidance for inexperienced captains. There is a small scene of Flint narrating the ins and outs of piracy, which could have made for an entire episode. Regardless, Flint is back on top after the failed overtaking of another ship and Silver is loved by the crew once again. Flint and Silver sail back to Nassau where, holy shit what is happening? During all of this, yes, the backstory of Flint and his mistress … is explored in somewhat boring flashbacks. I know, I mentioned in a previous review how it was interesting. To some extent, it does fill in the character personality spaces, but compared to Low getting his head severed, this is more in line with the historic drama the show pushes rather than the pulpy violence of the other side. The show still wrestles with this dichotomy as the early part of season 2 is filled with ludicrous sex, ridiculous threesomes, and expected infidelity. Jack, Anne, and Max develop a steamy partnership while Guthrie and Vance start a treehouse relationship where the tree house is the goddamn Fort that Vance has taken over. The viewer almost forgets that this Fort is a lynchpin of strategic placement because people just wander in all the damn time.

One of the mid season conflicts comes with Flint mustering up his crew to take back the Fort that Vane has. This almost comes with shock and surprise because the Fort hasn’t been made a central piece of the plot since season 1. Seriously, Vance comes down to the Consortium meetings all the time. It’s not like it’s a Fort or anything. While Flint is charging the Fort, Vance also learns that Low had the daughter of a Carolina governor, stowed in his ship. Because this show sometimes can be awesome, Vance is going to ransom her, which is the dumbest thing he can do and thus it is awesome.

I enjoyed the beginning of season 2 only because the boring parts of the show were balanced, if not made better, by the ridiculous aspects. I am starting to realize that the strength of the show might now depend not on picking a thematic angle but rather the schizophrenic nature of swinging wildly between the two it wants to be. By the time Flint charges the Fort it is safe to assume that things are going to get silly, wild, and half naked. I would not even be upset if the show swung back to dry nautical drama after this small escapade. For the first time in a long while I am intrigued to see how the show continues.