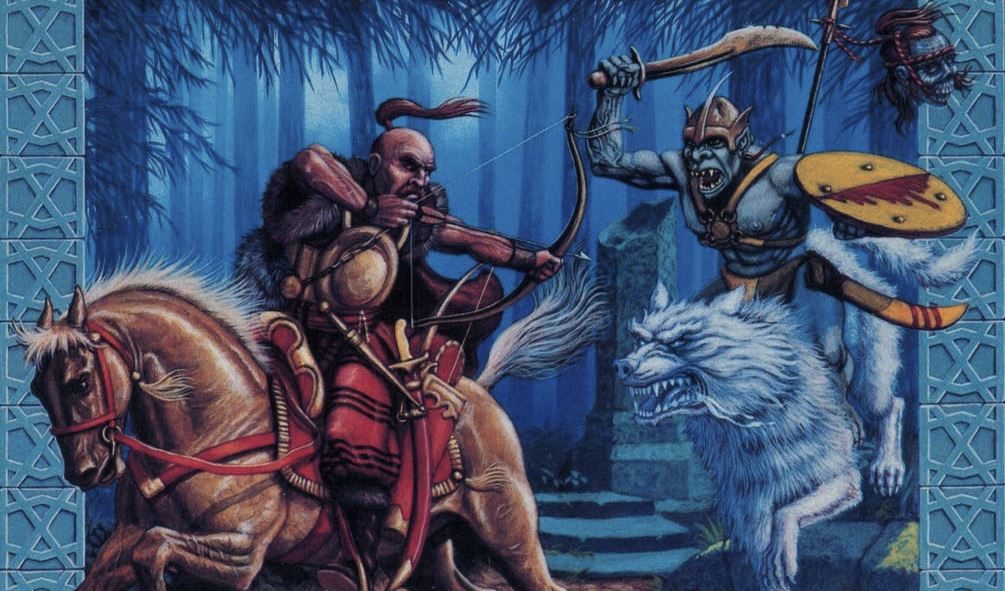 So it was my intention to fill this space with some flavor text pulled from the source of the artwork on the header of this article. the artwork comes from the 1986 module called “Night’s Dark Terror” written by Jim Bambra, Graeme Morris and Phil Gallagher. the module was the 10th adventure in the Basic series and was intended for people to transition into the Expert series of Dungeons and Dragons. Both the Basic, Expert and further sets comprise what is known as B/X, BECMI, and just old school D&D as I am still piecing together all of the acronyms. What is known is “Night’s Dark Terror” was a prompt for players to go exploring a wilderness scenario intended on letting the players explore a fantasy world with dangers probably hiding over in the bushes. The entire scenario seems to have a lot of content, one that even rivals most current video game expansions. What is known is this was a further bridge deeper into a world of imagination most certainly filled with perils in the night.

Perhaps one of the more humorous happenings in the DS community was the near firestorm surrounding ideas of a Christmas/Holiday styled Ds compilation. While some were bemoaning the death of the genre while others were putting on Santa hats, an unannounced full length was released that is not only reinterpretations of traditional music but also fitting of the dungeon synth atmosphere. Aside from it nailing the aesthetic without taking away from the music, the music from Krampusnacht lights a candle on top of whatever effigy and silently dances in the frozen forests gleefully by itself.

Is this a debut? This is amazing. Dungeon synths relationship to new age is not that far given the correct lines and Ur Pale does a wonderful job at bridging the two via mystic boat made of shimmering mist. Based around nautical themes in some future kingdom, Sea Synth Ensemble makes a joking nod to dungeon synth and exceeds brilliantly.

Soltiri is perhaps waiting for greatest as this shot EP/album is the fourth release in 2017 and one that continues to carve out a style that combines an epic atmosphere with modest production. The tolling of the bells in “Madness” is particularly interesting and whimsical in a macabre way.

Look at that minimalism employed in not only the visual aesthetic but also the music. Trad is a true neutral DS artist which has decided to sculpt a world out of raw classic sounding Ds with no allegiances drawn in terms of theme. Good, evil, light, dark, dragons, ghosts, kings, queens — anything is far game and probably fitting music that could be played for any occasion.

2016’s Forest was a spectacular record of light and medieval style music. 2017 is the year of the second Utred album and rather than the same idyllic landscapes that would probably appease most, this creator has taken up a horse and stormed a castle. With live instruments and a prominent place for a guitar, Sovereign maybe less passive than its predecessor but seems to cover more ground in terms or conquering.

Another hilarious flair up for the DS community this year came with the introduction of a Harry Potter themed record which despite it being fantasy was not in line with what people had visioned for the genre. Regardless of any stance on the fragility of the genre, Dispell continues to make interesting melodies in an unorthodox space for people who enjoy raw music based on a young adult fantasy novel.

[Editor’s Note: The originally linked media content by Duskh is now unavailable and a suitable replacement was not found. Apologies.]

Duskh perhaps represents one of the more traditional roots in DS being a one member bedroom fantasy synth project whose atmosphere is entirely made on a casio keyboard. While this genre grows and covers different ground, I am starting to appreciate some of these raw demos made by people who may or may not continue with the project.

[Editor’s Note: The originally linked media content by Oghoryt is now unavailable and a suitable replacement was not found. Apologies.]

Take everything I said about the Duskh demo and apply it to Oghoryt which is a name I can not type without going really slow. My journey through the sleeping forest of the past is a short release which was probably intended for no one yet the sounds of the warped synth and magical atmosphere makes this a treat for anyone who is looking for intimate fantasy synth.

Cryptic Dungeon is dark and was intended to be a celebration of dark dungeon music with medieval themes. Compared to the rest of the 2017 releases, Ataraxia is the more brooding of any release and something that is ultimately the most successful.

The final spot is usually reserved for the weirdest thing I could find in my searches. This time around, the two spots on the bottom are not weird rather they are specific. Much like Cryptic Dungeon, Szadź is devoted to long droning landscapes. Somewhere between dark ambient, classic DS, and winter synth likes this new project (from an older project) intending to cast the world in ice and sorrow.