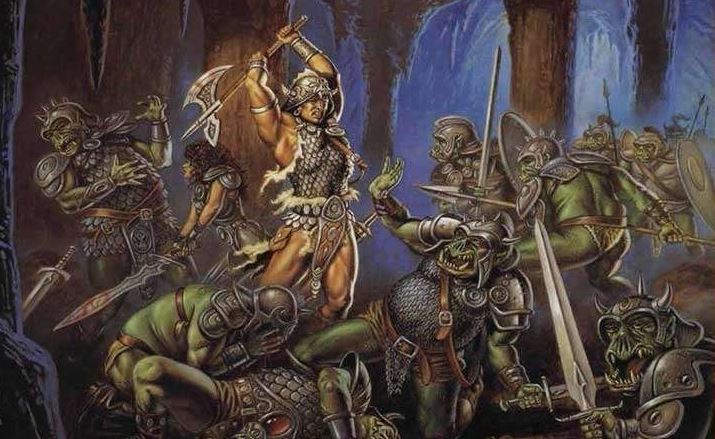 You have arrived at the town of Stallanford, on the Duke’s Road. The town is bustling and busy, with many visitors and merchants’ wagons seeking hostels and stables for horses. This is no ordinary day, for tomorrow is the first day of the King’s Festival! Karameikos has no king, but this long-held festival honors a great hero of the distant past, King Halav. Long before Karameikos was a nation, King Halav of the Traldar folk fought with his warriors against evil Beast-Men. In a great battle, Halav and the king of the Beast-Men fell, but the evil ones fled and the safety of the humans was ensured.

You’re rather late in arriving, and many folk are asleep. You sniff the pleasing aroma of cooking meat and warm bread, and you make for the tavern, the Hungry Halfling, for a meal and some rest. The inn is busy, but you find a table right away. The friendly old halfling who owns the hostelry charges 5 silver pieces for dinner, a bed, and breakfast. It’s good value though-the joint of beef you see on the table will fill your stomach after your long journey!

After a good meal and a chat with your friends, you settle down to sleep in a comfortable bed with clean linen. Just before dawn you wake to the sound of shouting in the streets, and you can see flickering flames through your window! Hurriedly, you dress, grab your possessions, and go outside.

Townsfolk and travelers mill about, some crying in panic or fear. You see that the small temple in the town is ablaze! A tall man dressed in gray robes walks over toward you and begs for your help.
“The orcs have raided us! They have burned our temple, and Aralic the Priest cannot be found. They
must have kidnapped him! The wretched orcs have to be found and slain, or they will be back to loot and kill again. Two of our people are dead. Will you help?”

Old Tower is perhaps dungeon synth’s biggest contemporary success story. From playing along aside of Mortiis to landing a record on Profound Lore, Old Tower has gone from moody old school dungeon synth to moody old school dungeon synth now with a bigger audience. Stellary Wisdom is the artists newest album with two lengthy tracks similar to previous records. I do not know what to say as the composition for this artists has not changed despite all of the press and granduer. It is almost like a larger fame and fortune for dungeon synth artists does not bring about the end of the world.

Jesus, look at that cover. My goodness. Ethereal Majesty is the second part of a proposed trilogy for a New Mexico based artist. Caught somewhere between dungeon synth, neoclassical ambient, and new age atmosphere, the sounds of the second installment are frigid and magical almost like the amazing cover which adorns the work. Even if this is your first experience with Dryads, please use it as an introduction to a sound which is wandering outside of established sounds much like one caught in a snowstorm.

There is a lot of dedications for Basic Dungeon in what it is and what is is paying reverence. Dungeons and Dragons, 8-bit fantasy games, Commodore 64 sound chips, and general escapism during the 80’s is all under the umbrella for this album that build upon the niche sound of Bit DS. This is probally the third tape reviewed from the label Heimat Der Katastrophe and it will most likley not be the last. This Italian collective has found something weird and broken and is going to continue to release things that are strange and wonderful.

This is a demo? Well, it seems the bar for demos has been raised as Midvintersagor, the first releases from this Swedish artist is well structured and sounds as if the direction has already been charted and underway. While still retaining the bedroom produced sound, the music for Midvintersagor strides into the historic sound of dungeon synth waving the flags of immersion, enthusiasm, and escape.

A letter for Carmilla was on a short list for artists that would probably go on to release great material in the future. Since being snared by the 2017 demo (?) Ruin, this artist has gone on to make an empire of longing with organ driven DS which sounds like the proclamations of the last person living.

Today I die is a split collaboration between This Mortal Night and Erang. This split is odd in that it wasn’t advertised and comes by the way of Katabaz Records which hosts all of Erang’s back catalog. The fact that all of the Erang material is unreleased experimentations could be the reason yet the similarities between the two entities makes me wild with conspiracies. Still, if one was looking for muted and somber keyboard driven melodies are enough to snuff out the last remaining light.

DEORC WEB continues to make music and since raving about this artists 2017 release, 5 more sit in front of me. There is not one single track I can point to to act as a hook for this artist as the strength of both The Forlorn Cold of Ages and previous releases comes by the way of patience and a glacial atmosphere of ice and sleep. This release is great as well as the other 5 that have appeared when I wasn’t paying attention.

The final entry into this digest does not rest on the shoulders of the weirdest thing rather the most isolated. Satyr of Solitude is dedicated to “Ambient music about isolation and the paranoia of folklore and nature.” While some of that does not really make sense, the haunting DIY production from someone who is channeling the surreal is quite remarkable and works as a experiment in weirdness.