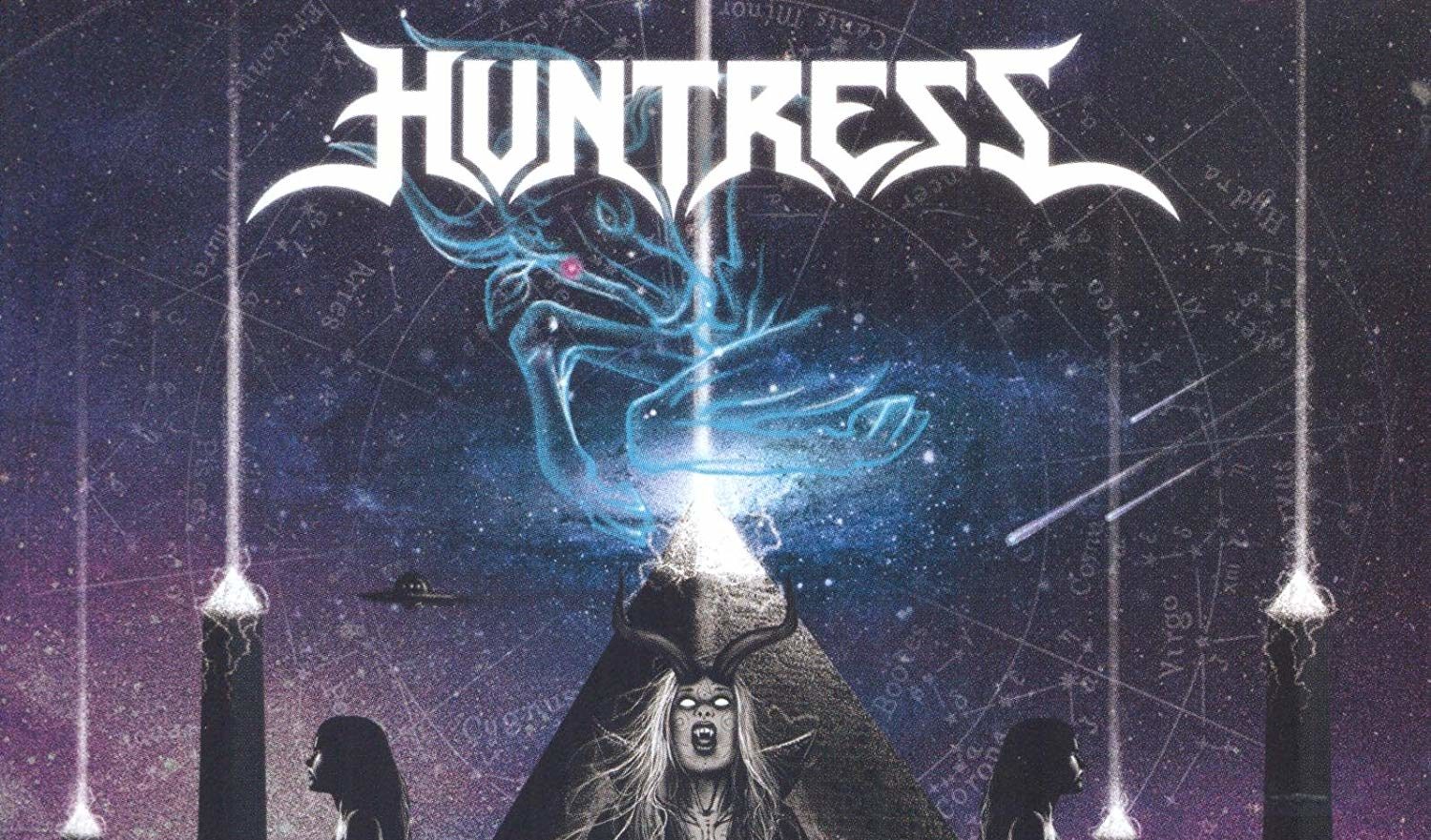 Old school metal is coming back, with bands like Ghost and Huntress blowing up! Many are stoked, while many others are not impressed. “Starbound Beast” is the second full length album by Huntress, a throwback heavy metal band from Los Angeles, California. The album title, artwork, and song titles seem promising. It is time to see if this is a worthy modern incarnation of the old school, or just another metal by numbers release.

To start, the intro track “Enter the Exosphere” is really cool. I nice blend of clean guitar, effects laden guitar (maybe synth, but there are so many effect options now, it is probably guitar.), ghostly female vocals, and then a nice transition into a harmonized metal riff (MUSIC THEORY REFERENCE: ahh thirds, you make up so freakin’ many metal harmonies.) This transitions into the first track “Blood Sisters.” I certainly approve of the subject, there are not many or any (that I know of) metal songs speaking of female bonds, which is awesome considering all the bromance laden songs within the metal genre (you know its true). Musically, its an alright track, nothing super ear catching but it shows promise for the rest of the album. I almost wish the intro turned into a full fledged song, it could possibly have made for a better opening track.

Next is the track “I want to Fuck you to Death.” Yes, that’s what the song is about. It is certainly catchy, and really really cheesy (I consider songs about unicorns less cheesy). Honestly, I hated this song at first, but am starting to like it for what it is. Considering all the metal and rock songs dudes have sung about banging, its somewhat refreshing to hear a good female singer screaming about it, especially that she is being so blunt.. “Destroy your Life” is the next song, and my favorite one so far. I really like the lyrics to this song. From what I’ve interpreted, its basically about “destroying” your normal life to achieve the true goals of your inner self, which I think is a necessary step to true destiny. The solo section, reminds me of Thin Lizzy, which is always a good thing.

The time has come, the fabled title track. “Starbound Beast” is a cool song. This is probably the most memorable chorus of the album. The lyrics are also highly decent, though it seems less celestial than the album cover and title suggest. But hey, I guess I am used to bands like Bal-Sagoth spelling everything out in immense detail and this song is more metaphorical. “Zenith” is the most thrashy song on the album, and is a nice change of pace to the mostly mid tempo rock feel of the rest of the album. “Oracle” is my least favorite track. It seems way more focused on power chords than sick riffs, though it does have its moments such as the a reasonably sick solo section.

The next track “Receiver” is second only to the title track. I think the opening riff shows off the good guitar tone they got on this album. Which is very tasty indeed. Again, the lyrics for this song are cool. I mean, come on! “Visions rape your skull. Back to Krull. Abandon all gravitation” Awesome. The bridge section is very majestic, and Jill gets to showcase her talent here. “Spectra Spectral” has an interesting chorus and bridge, but the rest of the song sounds a bit generic. The final track “Alpha Tauri” is another song that sticks out lyrically. Name dropping the Annunaki is always a plus (and I got to add it to my computer’s dictionary. Thanks for expanding my computer’s alien vocabulary!). The song progresses nicely, and is well written. Feels more like a musical journey than the rest of the album. The middle section is spacey-sounding, ancient alien approved. I’d say this is a good closer, good choice!

Overall, my main gripe with the album is that a lot of the guitar and vocal melodies are pretty similar, and I think it would serve them well to try and branch out melodically next time around. Other than that, it’s actually a pretty good album. Not strikingly original in any way, but I certainly think there is lots of potential here. Honestly, I went into this thinking I was going to tear this album apart, but I have emerged somewhat of a Huntress fan.