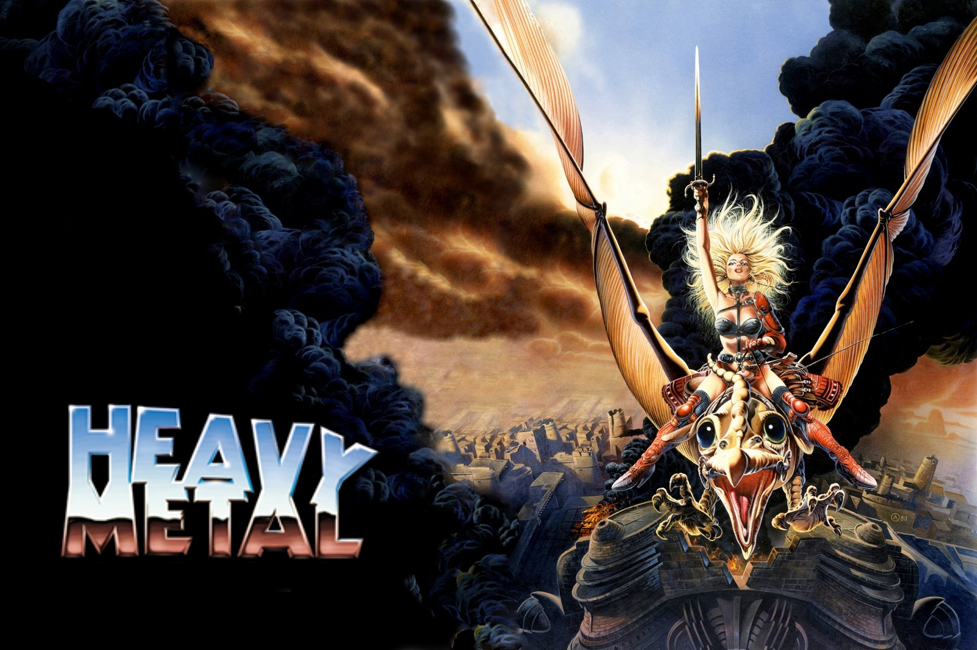 If the tagline for Heavy Metal isn’t “Titties, Lasers, & Heavy Metal,” I am going to be upset.

I feel that a perfect way to end my tour of 1980’s fantasy films is to end with Heavy Metal. I do this for a number of reasons. For the first reason, please see the opening sentence. Additionally, I began my 15 film marathon with Fire and Ice, another adult animated movie sold to an older audience of fantasy enthusiasts. In Fire and Ice I discussed my love for this style as it offers complete escapism in shoddy and ridiculous narrative. Heavy Metal may be the nexus of that idea as this film, magazine, and legacy comes from the baited moans of a horny teenage dream.

Heavy Metal, the magazine, began publication in 1977 and still runs today with the same feverish excitement for robotic genitalia. The magazine is a combination of fantasy, sci -fi, and, most importantly, off the wall juvenile antics that can be directly tied to the underground Comix of decades past. Heavy Metal features graphic serials that are, again, the literal continuation of pulp fiction — just now updated with 20 times the violence and gratuitous nudity. Heavy Metal, the film, has been in constant rotation, for me, since learning the joy that crude animation and asinine storytelling could bring. Titties? Yes. Lasers? Yes. Heavy Metal? Yeah, why not. Imagine if every awesome genre got into a head on collision and the wreckage strewn for miles was called Heavy Metal.

Much like the magazine, Heavy Metal is a series of non related short animations tied together by a thin thread of connecting narrative. Each of the segments was written and produced by a different team of creators. While this certainly promotes diversity, the art style and narrative themes fracture the film from a cohesive whole. In all honesty, the traveling green orb of doom could have been scratched from the story as it brought nothing linear to the erratic plot. Wait, hold on. Do I care? Fuck no.

The first segment is a particularly silly film noir set in 2032, which by the 80’s standards was far away. Harry Canyon is a taxi driver who inadvertently gets caught up with a girl, the aforementioned meteorite, and some sort of space mafia. Harry Canyon is a good first short to set the mood as it literally is not a traditional story with much resolve. In fact, it is more of flash fiction, or the middle of a story, which floats in the ether of events that involve a girl being disintegrated in the back of cab. What Harry Canyon does, however, is take a leading position as first slot in a serial publication. The narrative is perfect for an opening short story with death, mystery, and plenty of sex to keep anyone happy.

The second segement, “Den,” is an adaptation of a long running serial from the magazine by Richard Corben. At this point there are two versions of Den. The long running, complex planetary romance and the reduced version seen in the film. For brevity sake, I will discuss the film’s adaptation. Perhaps later, I will discuss the graphic version for a comic review. In the film version, Den is a science geek who finds the same meteorite in his backyard, which quickly transports him to an alternate dimension called Neverwhere. Den is now ripped with gray skin and soon finds himself in high adventure and sexual conquest with a princess he saved from a death ritual performed by other nude women. Listen, it makes sense if you, well no, nevermind. Den is tasked by the Ard, Neverwhere locals, to retrieve that meteorite (called the Loc Nar) from a nude queen and, because this film follows logic, Den tricks the queen by having sex with her while the minions of Ard storm the castle. Alright, before you walk away, let me explain.

The Den storyline illustrates the main aesthetic of heavy metal. Much like an Edgar Rice Burroughs story, Den is just an ordinary person who becomes enveloped in an extraordinary world. In the end, Den opts to stay in Neverworld as naked adventure holds much more excitement than everyday life. Den, in commercial terms, is the reader and Heavy Metal is the alternate universe. The transparency of the Den storyline is important as an overarching thesis of escapism and comfort. It is also one of the strongest, aside from the final Taarna storyline. Oh, that’s right, there are these middle sci-fi segments. Um, let me see. Muscle bound courtroom drama, zombie pilots, space cocaine, and robot sex. There did I get it? Can we please get to the part where a warrior rides a dinosaur? Floating around the voice talent for Heavy Metal is John Candy, Harold Ramis, and Eugene Levy, probably having the time of their lives.

Taarna is the main draw for the film as it is literally the cover. It is also the longest segment with something closely resembling a storyline. The story, or at least idea, was inspired by the Arzach comics created by French Artist Mœbius, which were published in the magazine Métal Hurlant was the French impetus for the American offshoot Heavy Metal. The concept is tiring at times, Taarna is the last of the Taarakians, which were an ancient warrior race now summoned by humans to aid them in their fight against an army of mutants that were transformed by the evil power of that goddamn green Gobstopper. Taarna, despite being clad in ineffective armor, is a strong female lead who literally battles against oppressive males aided only by her kick ass flying dinosaur stead. Honestly, you give a 15 year old a piece of paper and say draw the most awesome thing in the world and Taarna with her Taarakian mount is the outcome at least 60 percent of the time. It’s Science.

Listen, I could do the same thing I did for Fire and Ice and just blindly praise this movie despite its glaring flaws. It has many. Let us discuss, however, Heavy Metal’s strengths most notably the soundtrack. Some are confused with the choice of music as Heavy Metal’s soundtrack is not indicative of its name. Besides some blurry 70’s proto metal, the soundtrack for Heavy Metal is a smattering of hard rock, arena rock, and new wave. I mean Devo is in the film for God’s sake. While these choices look partially paltry compared to the vast selections of underground metal, the soundtrack acts as a vignette into a specific place in time. Before the rise of underground metal and the fracturing of subgenres, there was just heavy metal, the idea that things which rocked were included into a great hazy pantheon. The semi commercial nature of Heavy Metal’s soundtrack would be fitting for a suburban fantasy enthusiast in the early 80’s. While we would all like to pretend we would be listening to ultra progressive underground music at the time, it would more likely be Sammy Hagar. This is fine.

Heavy Metal, the film, does what it is right when it should have. Just like Fire and Ice, the film emits a warm glow of adolescent imagination of years gone by. The film retains the charm by being a cult classic, most likely due to many years surviving in bootleg form under the bed’s of adolescent boys. There was a less successful sequel in 2000 that tried to do the same thing but never really did. A while ago, David Fincher also expressed interest in doing a third installment. But I do not know if anything can come close to the nostalgia found in the original film of remembering an amazing time period I never experienced.