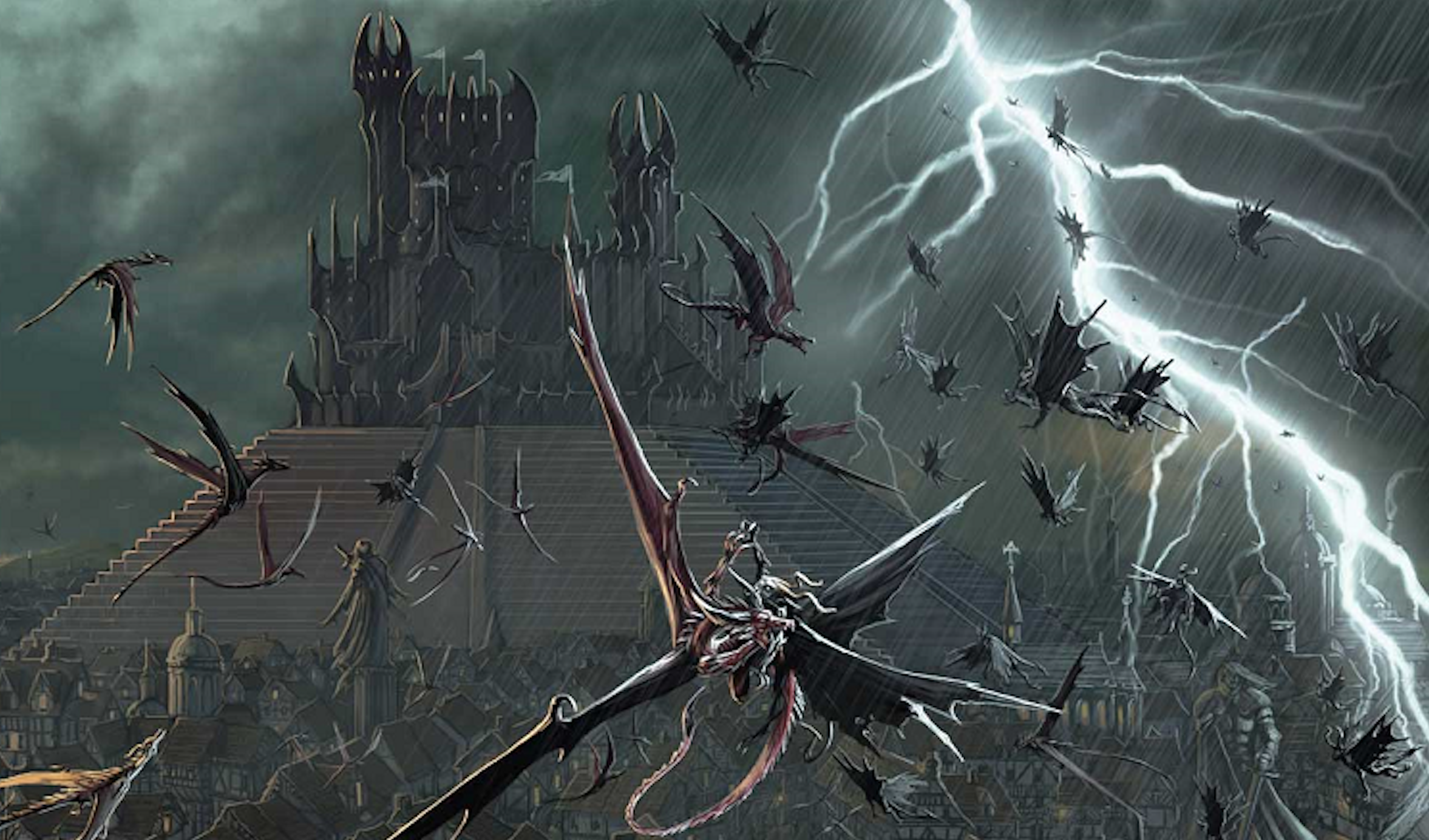 This is the start of a diary / log of of sorts revolved around running the Curse of the Crimson Throne campaign using the Pathfinder RPG system. This is not my first time game mastering an RPG game nor is it my first Pathfinder game. What this is though is my first time running a planned adventure as I have spent the past couple of years running homebrews which used loosely collected Pathfinder and D&D 3.5 rulesets. This is me trying to play it straight and for my players. This is me trying to ruin Pathfinder as close to the rules as possible while still maintaining a fun atmosphere. While all RPGs suggest a certain looseness when it comes to rules and I tend to be one of the more lax GMs when it comes to adventures, running adventure paths have a narrative and script which encourage creativity within the bounds of the story. Also my players have been getting wild with their actions so its time to impose some sort of consequences for their actions.

The king is dead! In the Varisian port city of Korvosa, the death of a monarch leads to chaos, and only the PCs can hope to save the city from its own darkest tendencies. As the rule of the young queen grows more and more draconian, it’s up to a band of bold adventurers to stop the spread of tyranny before all of Korvosa is crushed beneath her iron fist. In the Curse of the Crimson Throne Adventure Path, the heroes delve into the depth of urban adventure in order to stop riots, combat a plague, root out organized crime, and rescue political prisoners before escaping to the harsh badlands of the Storval Plateau, where only the friendship of the barbaric Shoanti and a weapon drawn from the heart of a gothic castle can give them the strength to return and depose the evil queen once and for all.

Curse of the Crimson Throne was and still is one of Pathfinders premiere campaigns. It was released in 2008 as a Dungeons and Dragons 3.5 adventure and has thus been updated to fit into the Pathfinder universe and ruleset. Written by Nicolas Logue, F. Wesley Schneider, Richard Pett, Michael Kortes, Greg A. Vaughan, and Tito Leati, this series of 6 connected adventures takes a part from the bustling streets of of large city to the wilderness where something happens. To be honest I haven’t read that far into the adventure so I literally do not know what is going to happen. Maybe this is the wrong way to play but I am sure I will figure out the rest of this story in no time. Part of the fun of running adventures is seeing the narrative unfold and having the players act within them. I have a vague idea of the story but really just brace for anything from week to week. This is me learning and these are the adventures of my fucked up party of characters.

My party consisted of varied adventures from the drug addled investigator named Decker, the underground Brawler named Rosie, a broadly sketched bard named Pat, an nondescript Magus named Zen and finally since this was going to be an urban campaign and I specifically said to pick urban styled characters, a hunter named Sheu which is literally a cross class between two nature based characters who carries a rat. This is the fourth Pathfinder campaign for this group and all of the player types vary from the min-maxer, the actor, the power gamer, and the players who pick nature characters for an urban campaign. This adventure was meant to do many things. One it was to introduce a tight story for people to immerse themselves. Two it was to explore some of the RPG staples like purchasing items, and upgrading equipment which was lost on my players in previous campaigns. Lastly it was to get acquainted with characters as roles in the party. From the Face, to the tank, to the one person with healing spells, each of the players tried to fit a role for their adventure. Gaedren Lamm is a reason for the whole party getting together. Lamm is a crime boss who “employs” little homeless children to do petty crimes. Lamm wronged each of the party somehow and this is the reason for all of them getting together. This meeting was organized by a fortune teller named Zellera. Zellera, as it turns out, is actually the spirit of a fortune teller killed by Lamm who communicates to the party via Harrow deck which is Pathfinders way of not saying Tarot. Curse of the Crimson Throne suggests and even has woven into its campaing is the use of this Harrow deck. It is 52 cards of major styled arcana each with an indication of the cards alignment and rules for interpreting the cards based on where they fall in the reading. These cards provided fun flavor for the game on a casual level but adhering to the strict rules of the reading has the threat of becoming burdensome. The end result for the Harrow prop was to provide the party with situational benefits throughout the game. As written the benefits are sort of lame and I have seen people replacing the Harrow points with Pathfinder’s Hero points which lie between really fun and super fucking broken.

Lamm’s story and eventual demise at the hands of the party is the beginning of the adventure as the party is suppose to find The Queens Brooch in the assortment of treasure. Rosie, our underground boxer Brawler character was in danger of picking up the chest where this key item was hidden and throwing it at an alligator that was attacking the party. I am sure the story would have continued but I am most sure that my party has a knack for unknowingly derailing plot points. the discovery of the brooch leads the party to the Queen who has ascended the throne after the death of her husband. The death has plunged the city into chaos and rather than rely on trusted guards, it seems wise for the Queen to hire some scrappy street urchins who just come back from murdering street thugs.

Edge of Anarchy is suppose to continue with a sandbox style sidequest checklist which will eventually lead into the finale of the first of six adventures. I do not know if my players suspect the Queen of any wrong doing but just by the cover of an evil looking Queen and the fact that nothing is ever simple in a high story campaign, I’m sure all of them will perpetually learn. Thus far my players are at level two entering into three. Because I am pushing the idea of consequences so much to this group there is a more careful approach to dealing with situations. This does not stop our Investigator Decker from shooting a mad prophet in the street since he was filthy and lunged at the Hunter Sheu nor does it stop possibly throwing key items at alligators but I feel the players are learning to adapt to a real world with consequence. I would not be surprised if all of my players ended up in jail, dead or potentially both but since I only know a little bit more of the story and have no idea what they are going to do, I guess each week will be tuning in for the next crazy chapter.