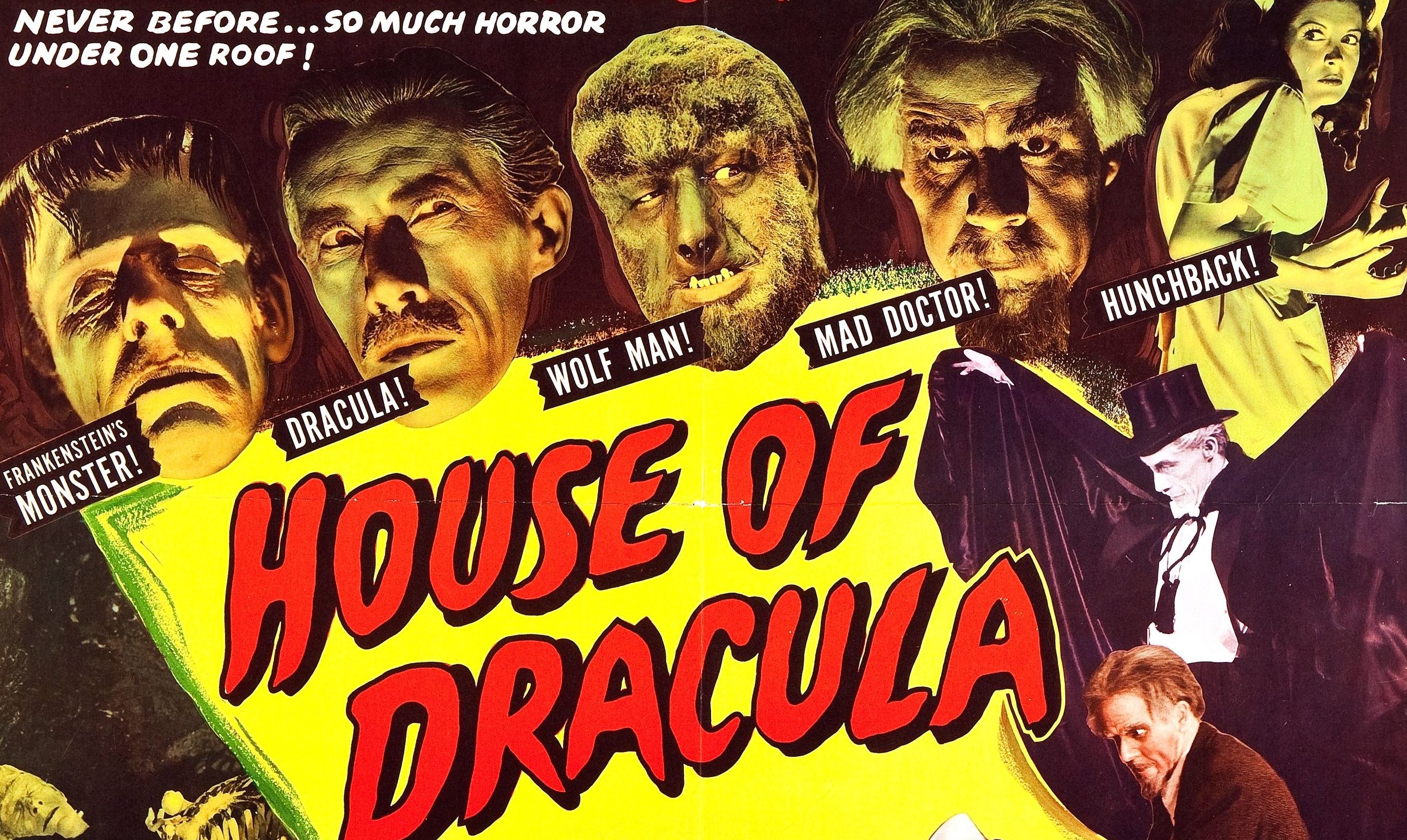 When traveling through classic horror, it is entertaining to categorize the movies by theme and decade. This helps in processing any trends and eras which might assist in framing multiple films. If the 1920’s for classic horror was the primordial inception and the 1930’s was the genesis of all of the soon to be renowned characters, then the 1940’s was the era of sequels, crossovers, and continuations of the characters into the ground. It is also enlightening to take into account what else was happening in the world at the same time. The monster rally films were being released with great vigor in the depths of World War II. Given the gravity of current events, these stupid films take on new dimension as stupid films which were probably therapeutic for the world at large. These ensemble films did little to preserve the continuity of original characters. Additionally, even the sequels of previous films did even less to preserve logic and cohesive storytelling. Though after taking into account what else was on audience’s minds, I do not think anyone truly gave a shit.

House of Dracula ends a three film cycle revolving around the exploits of multiple monsters all jammed in one place. Beginning with Frankenstein Meets the Wolfman and continuing with House of Frankenstein, these rally films follow a loose plot device of the Mr. Talbot, AKA The Wolfman, wishing to die and getting robbed of this dream every single fucking time. Another prevalent theme in these films is Frankenstein’s monster appearing in the last five minutes, wrecking things, and then meeting a ghastly end. House of Frankenstein was the first film to add Dracula to the story thus continuing the tradition of piling more monsters despite it making sense. House of Dracula is a fitting conclusion to these rally films because it just seems like they stopped giving a shit altogether. House of Dracula suffers from an core deficiency of plot once all the monsters are assembled. tTere is little care in actually having a cohesive plot and reason for them all to be here. The center attraction for House of Dracula takes place in the castle of Dr. Franz Edelman. Actually, I’m going to spoil this for you but, there is no House of Dracula rather a house of Franz. Regardless, Franz’s house is a place of science and in this place of science lots of weird blood experiments are happening. It is this sort of science that is attracting all sorts of monsters. Dracula is seeking a cure for his vampirism. I do not know why since that very notion goes against every one of Dracula’s character conventions but let’s just say he is doing it for evil. Edelman’s scientific knowledge is also being sought out by Lawrence Talbot AKA the emo wolf guy. Both of them descend on Edelmann’s castle, without knowledge of the other, at the same time.

“But wait,” you may ask, “didn’t both of these characters die in House of Frankenstein?”

The answer is yes. Dracula, played by John Carradine, perished by direct sunlight after being unhitched by the other mad doctor Neimann during a wild carriage chase. Talbot, played by Lon Chaney Jr met his end by way of silver bullet via his gypsy lover Ilonka. Since both characters are played by the same actors, and House of Dracula has references to past films, I am stumped on how Dracula and Talbot are here at this moment without even a mention of their immortal demise. In fact, the more hilarious part is Frankenstein’s monster, who sunk in quicksand in the previous film, is given great detail on how his indestructibility saved him, yet the other two just waltz around without a single care of continuity. The glaring flaw in the story is so obvious that it is quite charming how many fucks this film refuses to give. Whatever the fact, we have one gloomy ass wolfman and one lurking vampire. Oh, also we have Frankenstein’s monster, again, brought to life by another mad scientist. If House of Dracula wasn’t so goddamn strange, it would be a complete trainwreck. Eldemann’s two assistants, Milizia and Nina both assist him in his weird blood transfusions. Nina is a beautiful hunchback assistant and Milizia is a beautiful non-hunchback that falls under the spell of Dracula. Don’t ask me why they didn’t just bring back the other hunchback who supposedly died. This whole horror parade soon centers around Dracula’s blood transfusion, in which Edelmann volunteers to be host. Because nothing can be easy, Talbot turns into a wolf, runs amok, and catches the attention of villagers who have nothing better to do than to form mobs and sport torches. As if things can’t get more complicated, Dracula reverses the transfusion and pumps his blood into Eldemann making an evil version of the doctor. the mad doctor also decides now is a great time to unleash the monster.

In terms of raw death on screen, House of Dracula has more than most of the films at the time. Dracula gets drug out into sunlight and perishes…again. Nina, the lovable hunchback gets her neck broken by the doctor. A nosey police inspector gets electrocuted by the mad doctor. An innocent gardner gets strangled and dumped out of a runaway cart in the middle of the town…again by the doctor. Talbot shoots the mad doctor and manages to trap Frankenstein’s monster before flaming rubble falls on the monster’s head. Is anyone else alive? Talbott, the one character that wants to die? Good. This is like the third time Frankenstein’s monster has woken up only to be either flooded, sunk in quicksand, or consumed by fire. Goddamn it. Talbots end isn’t all that bad however as he is finally cured of his lycanthropy and finally the character is allowed to have a normal life.

House of Dracula is noted for its absence of both Boris Karloff and Bela Lugosi, two actors who have been in most of the greatest and worst films of the past two decades. Whether or not either one of them could have brought any weight to anchor this film is moot as the rally franchise ended for two long years after this. While this seems like normal time between sequels, the run from Ghost of Frankenstein to House of Dracula ran in yearly installments. These characters would not be used again until Abbott and Costello meet Frankenstein resurrect the monsters, a comedy film which lampoons the horror convention. While still a classic, turned the monsters into more of a schlocky goof fest. Although Abbott and Costello would continue the monsters popularity throughout the 50’s, the landscape of horror had changed and the terrifying monsters which once terrified audiences would rest in their crypt for almost a decade. A British production company would resurrect the monsters during the late 50’s for a new era of horror. Until then however, House of Dracula could be considered one of the last flames extinguished on a long burning candle.