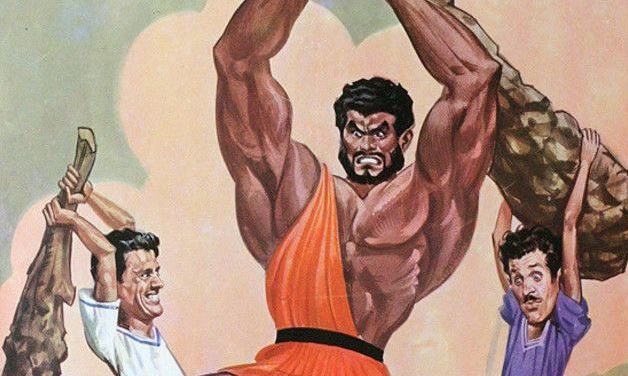 I am glad you have traveled with me this far. I understand that sticking with certain film series can be trying especially when things get really bad. The 40’s monster rally series was also poorly done, but not like this. The 60’s Italian sword and sandal craze started out decent enough, but quickly plummeted into abysmal quality. If previous entries can be surrendered to cheesy escapism, the 7th entry in the Hercules series is one of the most disposable and needless developments the genre has ever seen. I may be wrong about this, but it is hard to think of any movie less deserving of screen time than Hercules in the Valley of Woe.

Before we begin, it is important to restate the fact that I enjoy bad movies. Camp and cheese can be entertaining, and assessing fantasy films will expose oneself to less than stellar films by academic standards. Regardless of traditional merit, fantasy films have a chance to connect with an audience through characters, stories, and even ridiculous actions. Even one of the worst sword and sorcery films, Krull, is still somewhat entertaining to watch. This trust in bad movies breaks, however, when one side doesn’t get it and even tries to force the film to be something it never wanted to in the first place. Maciste contro Ercole nella valle dei guai, or Maciste Against Hercules in the Valley of Woe, or Hercules in the Valley of Woe, uses the traditional sword and sandal setting as a backdrop for a slapstick comedy act that goes on far longer than it is welcome to do. If anything is more irritating than a bad fantasy film, it is a bad comedy fantasy film subbed from another language. Jesus, is this how low we have to go for entertainment?

Lets get this silly little “plot” out of the way first. Two contemporary promoters are faced with financial trouble and then devise a way to make real money by stealing a time machine and traveling forward to learn the winners of all of the sporting events for the next year. I know that is the plot for Back to the Future II, but this was decades before. The two incompetent promoters, Ingrassiade and Francheo are accidentally sent back to the time of Hercules where they flop like fish out of water. Though the film advertises a bout between Hercules and fellow Italian strongman Maciste, the majority of the film centers around the foils and follies of Ingrassiade and Francheo as they fast talk their way around Eurystheus.

To be quite honest, that is all I am going to say about the plot of Hercules in the Valley of Woe. If any film is less deserving of a full narrative summary, it is this one. As stated before, this film is not a Hercules film rather a vehicle for the comedy duo Franco Fanchi and Ciccio Ingrassia. Hercules in the Valley of Woe would be one of the first films for the duo, who would carry their Italian buffoonery for many decades with titles that are asinine to read out loud. Fanchi and Ingrassia would take their inspiration from other duos such as Laurel and Hardy and add in a whirlwind of dialogue. I am completely open to the fact that Hercules in the Valley of Woe could be funny in its original language given the right amount of context. In 2015 however, the film is near insane with its bits, gags, and wandering away from the central plot. Nothing is funny and the parts that are humorous are not long enough to make this a goddamn film.

Listen, we are ALL as confused as you are.

It pains me to write about a comedy film, since it’s intention was supposed to be less than serious. Unlike a dramatic action or adventure film that turned out poorly, lampooning a bad comedy film just feels unnatural. Despite these hesitations, part of my distaste for Hercules in the Valley of Woe is it’s mistreatment of two characters that are more deserving than what is presented. By 1961, the sword and sandal engine was running out of steam and would come to a grinding halt in 1964 with the release of Sergio LEone’s Fistful of Dollars. The Spaghetti Western craze would eventually confirm the end of Peplum but by the early 60’s the weakness could already be seen in its quality — or perhaps even from the start. Maciste, who had already been an italian archetype for a half of century and had a separate series, receives poor treatment as a bonehead who wants nothing more than to show up Hercules at the behest of his companion who only speaks in echoes. Guess what got annoying two seconds into the gag? Kirk Morris plays Macsite and rarely gets the chance to show his might as in other films like the Triumph of Maciste and is even hidden from the film until halfway through its running time. Strongman Frank Gordon plays Hercules, which is his first and last role, ever, which maybe the result of this films inability to connect with any audience.

1961 was a busy year for Peplum, despite the genre sinking further under the waterline of poor quality. Maciste, the Strongest Man in the World, Maciste at the Court of the Great Khan, The Triumph of Maciste, Maciste in the Land of the Cyclops, Maciste Versus the Vampire, Ursus: Son of Hercules, The Revenge of Ursus, Ursus and the Tartar Girl, Samson, Hercules and the Captive Women, AND Hercules in the Haunted World all were released in the same year as this comedy disaster. Perhaps it is illogical to hope for every film to be at least entertaining, as these are also the woes of early grindhouse/pulp production. Hopefully Hercules versus the Moonmen won’t be this bad.