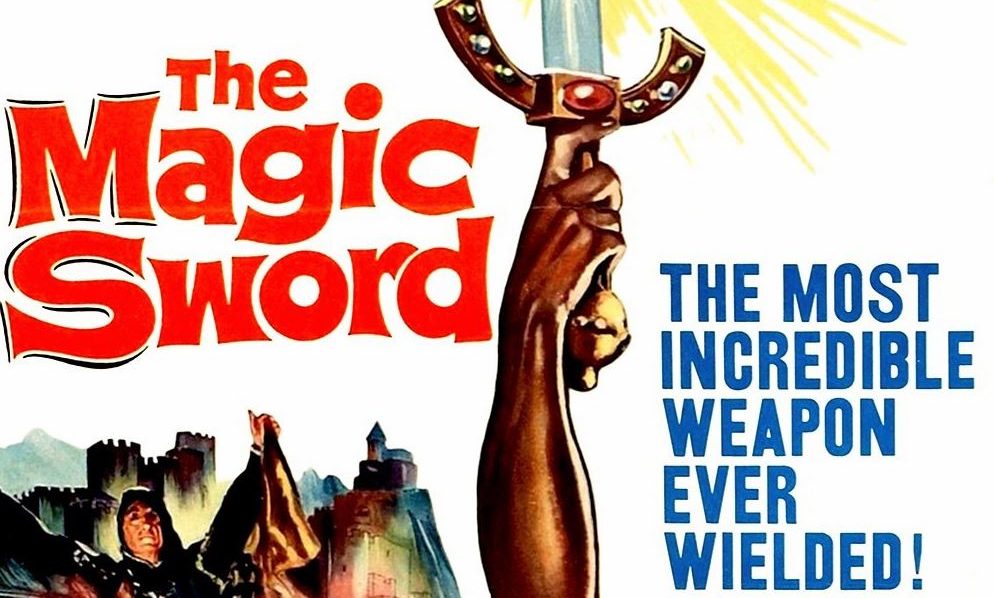 Looking over the different decades of fantasy films seems to show a pattern. The 1980’s is the decade that usually stands out in people’s mind as the classic period. Personally, I have found the 1980’s, following the success of Conan the Barbarian, to be a fertile ground for both surprising hits and forseen disasters. The 1990’s, in contrast, has shown itself to be the period when fantasy films were in decline. The 00’s, for further comparison, a time for renewal and refocus. I have always thought of whatever came before the 1980’s, however, as sort of proto-fantasy time, which existed as primordial ooze. I have since learned the 1960’s saw dozens, and even hundreds, of sword and sandal movies as well as fantasy-esque family films produced by companies such as Universal and Disney. The Magic Sword was one of the first 1960’s fantasy films I found and was a live action one aimed at children, which for some reason was never immortalized like Sleeping Beauty and The Sword in the Stone. For reasons, known and unknown, this fantasy film never incurred the longevity of its counterparts and remains an obscure entry in proto-fantasy filmmaking. I just hope it isn’t boring as fuck.

The Magic Sword is loosely based on the legend of Saint George and the Dragon. The legend, through various iterations, sees a town plagued by a dragon who is only appeased by the sacrifice of something awful — be it sheep or innocent children. The town sets up a lottery to choose the victims but is soon disbanded when the king’s daughter is chosen. The king offers a sum of gold and silver to the one who can slay the dragon because that really seems fucking fair to everyone else who already abided by the lottery. Saint George offers to slay the dragon on the condition that everyone in the town convert to Christianity. This legend not only shows a classic good versus evil scenario but also illuminates how weird missionary work was if the peril of being eaten by a dragon was held over heathens heads. Hey, can you take care of this dragon? Sure, pray to your God? Whatever, can you just stop the murdering of children please. Look out everyone, premiere special effects and costume design coming through..

If this whole thing sounds at all familiar, it may be because this is the basis of another fantasy film called Dragonslayer. Dragonslayer was interesting for its deconstruction of the Saint George myth and questioned the nature of history and validity of legend-making. The Magic Sword, in contrast, does none of this and attempts to make a complex allegory into the most palatable and forgettable film ever made. I may be too harsh as I take my Saint George adaptations quite seriously. The Magic Sword, for all of its innocuous exterior never possess the charm nor character to make it a memorable film.

Sir George is a shithead. He is a cocky fuckwit who was raised by a sorceress, Sybil, following his parents demise from medieval plague. Sir George, like a fuckwit, has fallen in love with a princess named Helene at first sight. Helene, surprisingly, is also at the center of a royal kidnapping by local wizard Lodac as some sort of wizardry vendetta against Helene’s father. Lodac informs the court that Helene will be fed to his pet dragon in seven days time thus giving ample time for anyone to rescue her. Helene’s rescue is headed up by two people. One is Sir Branton who is a suspicious looking knight who is probably, definitely, and most certainly not working with Lodac and Sir Fuckwit George who was specifically told not to go but he locked his sorceress Step-Mom in a basement and stole all the magic armor stuff and the magic knight statues from her because she said no.

If the last part of the review sounded silly, it is. The Magic Sword not only follows a very hazy fairy tale structure but it moves along at a dreamy pace that has no root in logic or reasoning. Why on earth would Sybil tell George he can’t go on the dangerous quest to save Helene and then show him the +10 Armor and the sword that strikes critical hits all the time? How about not letting him know that he has a gamebreaking armory in his basement. What about straight up lying to his face? Oh my, what is a 20 year old fuckwit suppose to do? Hopefully not be a complete asshole. Oh wait, nevermind. What a strange and slightly fucked up lobby card to have scaring the shit out of kids in the 1960’s.

So here is the thing. Lodac, in addition to giving knights enough time to mount an attack, also gave them direction to his hideaway. George and “definitely not working with Lodac” Branton team up and travel together with six newly animated knights from different lands complete with stereotypical accents and personalities. Spolier here, the Irish knight sounds like a Boston commoner with a cold. Lodac also plagued the entire land with seven curses to thwart would be rescuers, which includes an ogre that looks like a werebear, a deadly swamp that looks like an uncleaned hot tub, a really really really hot desert, and an old hag dressed up like a sexy frenchwoman who seduces the French knight because, you know, France. Much like a horror movie the party dwindles after Branton turns out to be working for Lodac. You fucker!

Sybil, the basement sorceress, has proven herself useless thus far. After being outwitted by her fuckwit foster son, she accidentally turns off George’s magical powers, leaving him defenseless save for his charm. Wait. Defenseless. Sir George makes it to the unusually busy evil castle only to find Helene under the charm of Lodac and at the bottom of a trap. Helene is taken to the dragon and George manages to only get there in time thanks to some small gnomes. Do not worry. Let’s just move forward. The entire movie leads up to the kinda cool looking two headed dragon, which would completely crush George if not for having his powers turned on at the last second. Oh, thanks. You know anyone can beat a monster with an unfair weapon. Let me guess, it’s invisible, invincible, and shoots lasers that kill everyone dead. Yeah, I do not want to play with you anymore.

I am sure there are fine examples of early fantasy films. In fact, I am going to make it my goal to find one from the early to mid part of the 20th century. The Magic Sword is the product of a larger than large production machine, where films were cranked out in studio lots with big name stars playing in ill fitting roles. It was also produced at a time when interest in fantasy was still childish and the effect of Lord of the Rings, and psychedelic drugs, hadn’t gripped the culture. Now I understand why this movie was forgotten and even ribbed on an episode of Mystery Science Theater 3000. It is true there are worse movies out there and even ones who manage to be more boring than this. The Magic Sword plants itself square in the middle, which begs to be forgotten. Whether or not it is the dull storytelling or the abandonment of logic, the Magic Sword is best when you do exactly what it wants — to be forgotten.