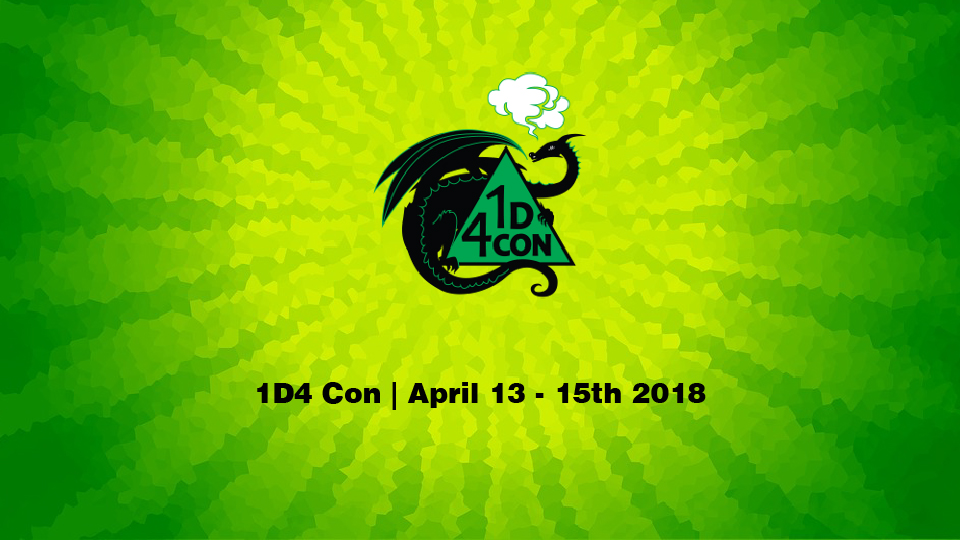 I believe the final numbers, in terms of attendance for 1d4 Con was 297. This tabletop convention held at a Holiday Inn in Martinsburg West Virginia broke their previous attendance by about 20 or so people and the organizers were ecstatic at the numbers. This sort of enthusiasm for growth is the type of thing I enjoy in conventions and even something I seek out when looking for local events that may not be so local. We drove around 2 hours to attend 1d4 Con and while the 3 day weekend did not hold anything in particular special that wouldn’t be anywhere else, the intimacy and size of the convention was a drawing factor. In fact, we have been scouting out more places that maybe on the beginning of being more well known.

In an age where attendance conventions can get up the hundreds, thousands, and even hundreds thousands, attending a convention with under 500 people is enjoyable and maybe even preferable. While you trade in things like number of vendors, games, and events you get a different type of atmosphere, community experience, and potentially more enjoyment since for the price of one large convention you could attend two or even more smaller ones. 1d4 Con was worlds apart from events like Gen Con and even DC area ones like Magfest but still had its own vibe and culture which was attractive. Situated in an unimpressive hotel off of the highway, Martinsburg West Virginia played host to dozens of stories of fantastic fiction. What I have been learning is that one does not need attendance numbers when the places traveled lie far away from here.

Below are some of the games I played and my thoughts on them. I ran one game while attending three others throughout the weekend. My wife played in others like like Call of Cthulu and Shadowrun with the same intention of learning new systems. I thank 1d4 con for being small enough yet professional enough to organize a weekend where everyone seemed to be having the best weekend in the world. For as out of the way and one of the more unremarkable place off of the highway, it was sure entertaining to be apart of. 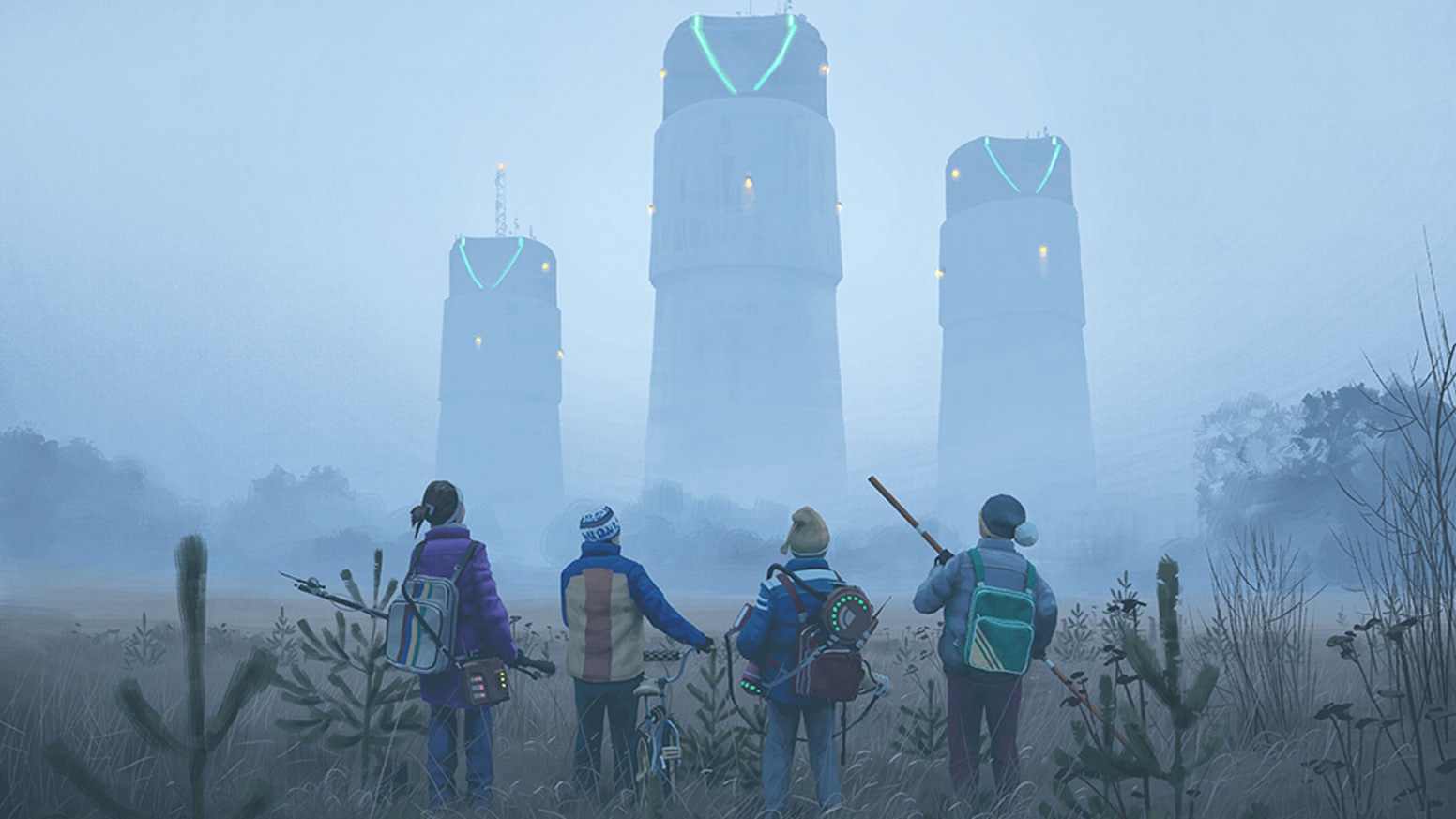 Tales from the Loop was a 2015 sci-fi art project by Simon Stalenhag which created a fictional Swedish town inhabited by fantastic occurrences. The book imagined a place set in the 80’s where dinosaurs, future tech, and shadowy agents all created a world where the kids where the only ones who had a clue. The art book was a Kickstarter project and after its success another project was Kickstarter to develop an RPG based on the setting. Later known as the Stranger Things RPG, Tales from the Loop actually combines elements of ET, Stephen King novels, Goonies, and basically anything else where kids are the only ones who can do anything.

This was my third or fourth time running the game as a GM since its alpha release. Now in its first edition, Tales from the Loop has become my default game for conventions as it is one of the easiest systems for selling a world. Unless obstinate, it is not difficult to engage a players imagination with any of the above reference material. Even if players are not interested in 80’s science fantasy, it is not difficult to pitch them the aesthetics and have them understand. Add to this the abundance of synthwave playlists as background music and one has a 4 hour gaming session which works brilliantly for the time allotted.

The mechanics for the game revolves around Modiphius’ Mutant Year Zero dice pool system where each 6 on a dice is a success and more dice are added based on situations. Failures usually end in more complications and conditions for the players. Tales from the Loop is not a mechanic heavy game and the dice rolls exist to keep the story moving. With that said, it is a clean system with stock character classes (Weirdo, Jock, Geek, Troublemaker) prebuilt for players to come with a trope in mind to play like a movie character. With the addition of kids having one chosen iconic item to boost rolls and no real chance of dying, Tales from the Loop is a fantastic convention game which is just unique enough to set it self apart from fantasy games but familiar enough for an easy hook.

13th Age was one of the few games I never played and signed up without having any previous knowledge. Proposed as a hack on the Dungeons and Dragons rules, this was suppose to take the elements from various editions into a better world. In fact, the entire system was created by D&D designers who worked on the 3rd and 4th edition of the D&D so is really just an alternate universe where things have a faint uncanny familiarity. While using the Open Gaming license, 13th Age is a d20 system set in a world that kinda seems to be at odds where it is in relation to the world. While our game when fine and it was enjoyable, the system itself seemed to be wrestling with what it wanted to be as elements of both rules light storytelling and crunchy mechanics battled itself throughout the game. Additionally, the system came with its own lore which ran rough against its love of making things up. 13th Age seemed to be like if you took both Dungeon World and made it sit in a seat and focus on one setting. The idea of freeform creation within a set world is interesting but it needs a good leader, innovative players, and time to flesh out your guided creation. A convention was probably not the ideal place to show the depth of this system but it was interesting enough to try for four hours.

This is the first time I played Dungeon World where in the past I have always been the GM. In fact I think I have only run Pathfinder more times than Dungeon World only because I found Pathfinder years before. Dungeon World is a fantastic system and probably a good choice for anyone who already started with D&D 5e and wants to move to a more loose storytelling system. It is also one of the best systems for a one shot as the entire story is generated by the players and ran with the GM literally making shit up on the fly. It is also one of the cheapest systems (almost free) to get into, requires no maps, and potentially has everything you need to play free on the website. the only drawback to the game is you need a good leader and someone knowledgable in the system to make it work and immersive. While not as insane in terms of freeform narration as systems like Fate, Dungeon World is a deceptively deep system which when given a good DM and a good group of people can be one of the more enjoyable experiences at a convention. 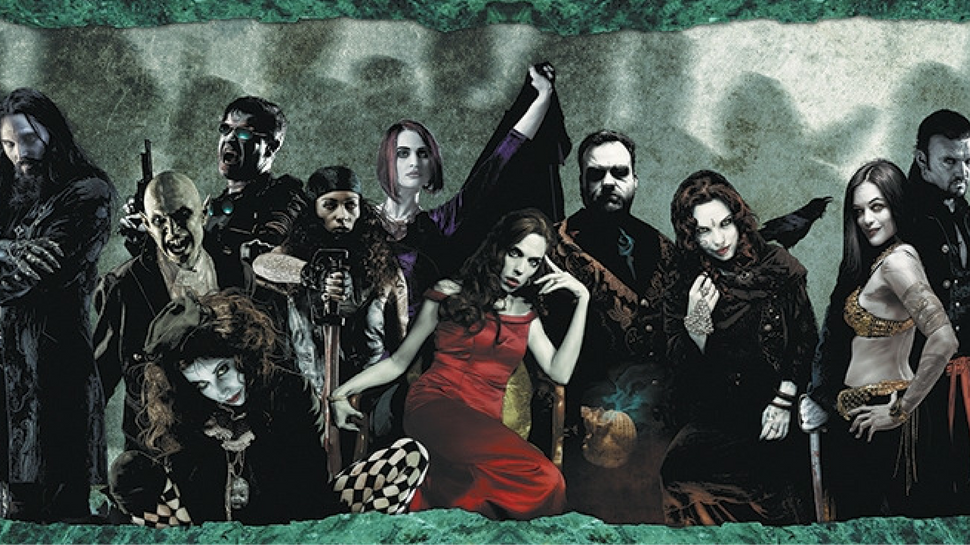 Vampire the Masquerade is a 1990’s RPG, released by White Wolf Publishing, which was one of the first to be set in the World of Darkness setting. Other publications include Werewolf: The Apocalypse, Mage: the Ascension, and about a handful of less known titles kinda revolved around the same thing of Gothic modernity and similar naming conventions. The tabletop versions of these games use the Storyteller system which is a d10 dice pool with various advantages and disadvantages for resolving conflict. World of Darkness also has a separate rule system when you play these games in the Larp Form. Yes, that type of Larp.

Live Action Roleplaying or Larping has the curse of being one of the most maligned and probably misunderstood forms of storytelling/gaming. It also doesn’t help that there are different varieties of Larping (combat, adventure, theater, historical recreation) which usually get grouped together as a bunch of dorks running around in cloaks. Vampire: the Masquerade, when run by the Minds Eye Theater system, is probably the closest one would get to the stereotype of Larping as it is immersive, no contact Roleplaying, based in the world of urban vampires who are playing in a Holiday Inn in West Virginia. It was also a blast to play.

The game was run by the Lost Chronicles chapter which is a division of LARP operating in Virginia and oddly Arizona. Both stroytellers and players were very welcoming and after a barrier of figuring out what to do, made the game enjoyable and intriguing. Larp may not be for me and this was probably the furthest I have traveled in terms of extension into immersion territory but even after some of my reservations, I found the same people who were enjoying themselves like any other game.

This type of Larp is always going to have a tough time even within the world of RPG fans. With players using rock paper scissors to resolve conflict, plus a steep learning curve when it comes to stats, plus its relative obscurity, plus some bad press involving players murders in the 90’s makes Vampire the Masquerade, and other systems like it, one of the most inaccessible games at a convention. The rulebooks for these World of Darkness games are relitlvy cheap and it may push me to atleast check out the game from an observational distance.