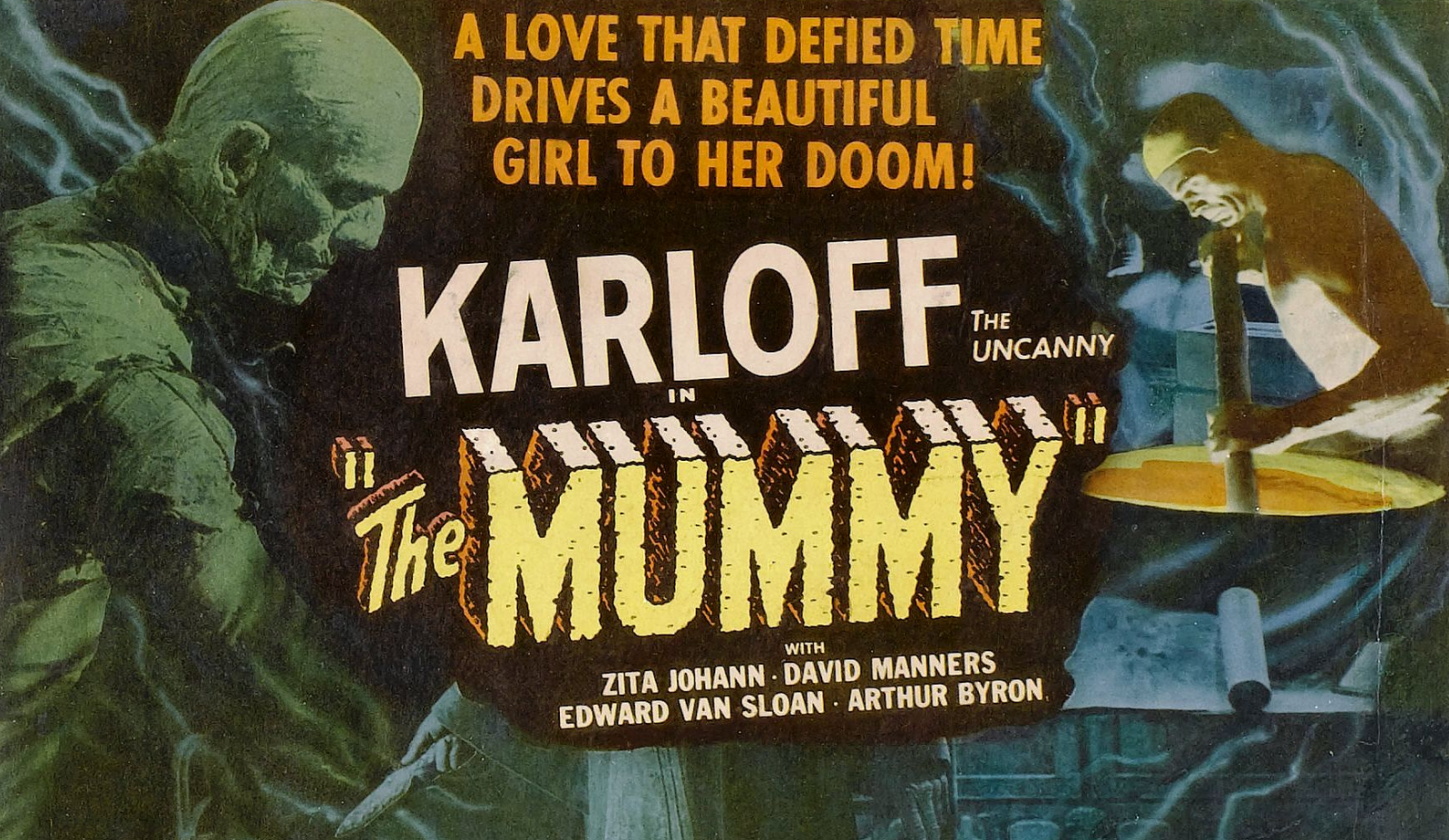 The Mummy is interesting for a variety of reasons. First of all, it continued Boris Karloff’s reign as the horror heavyweight in yet another memorable film. Secondly, it began a series of unrelated films that featured an ancient Egyptian corpse as the central villain. Last, and probably most importantly, it has little to do with what we think of as the Mummy monster. While the 1932 film undoubtedly has references to the still wrapped corpse brought back to life, stalking around present day, the actual trope of a white bandaged Mummy would not be established until decades later with a series of 1940’s B movies and the 1959 Christopher Lee film of the same name. At this point, the Mummy was less a lumbering monster with arms at Akimbo and more a creepy eyed old man who loves to stare.

The Mummy takes slight inspiration from The Ring of Thoth, which was a short story written by Sir Arthur conan Doyle. The Ring of Thoth details the plights of an ancient Egyptian scientist who, after discovering the elixir of immortality, finds that his love passed away. The secrets of life and death are hidden within a ring and Susra’s, the scientist enduring centuries of grief, attempts to resurrect his love Atma. The Mummy, the film, has similar themes with more of a dramatic narrative. Imhotep, played by Karloff, is resurrected by negligent archaeologists and wanders modern day England looking for a way to resurrect his one true love Ankh-es-en-amon. Aside from maybe two seconds in the beginning, there is no toilet paper attire or lumbering gaits associated with Imhotep. Get a good look because the iconic Mummy in a sarcophagus only really happens at the beginning of the film.

Although the Mummy is one of the more recognizable monsters in modern memory, it is also a testament to our fascination with Egyptology. The 1922 opening of King Tutankhamun’s tomb in 1922 at site KV62 not only sparked the imaginations of western civilization but also birthed superstitious fear. The curse of Tutankhamun, which supposedly lead to the death of principal scientists involved in the unearthing, is rooted deep within the the 1932 film. Though theatric and modeled for entertainment, the cultural fear of disturbing the dead runs thick through the undertones of the film. While the audience wants to see and fear a walking corpse, the ultimate horror is at modern civilization’s disturbance of the past.

The bulk of the Mummy centers around the newly animated corpse of Imhotep and his dauntless efforts to resurrect his past love, the princess Ankh-es-en-Amon. Imhotep finds a suitable host in Helen Grosvenor, played by Zita Johan, who looks similar to the princess of his past. As a man of vintage values, Imhotep attempts to do what any man would do, which includes trying to murder Helen, mummify her, and then resurrect her with the scroll of immortality. Maybe. The actual science and logic behind Imhotep’s plan is still a little fuzzy. This is alright because Imhotep has what seems like endless powers of ancient magic. Ah yes, who could forget about the classic all seeing pool of smoke, past, and present.

Aside from being produced by Universal at around the same time as other classics, such as Dracula and Frankenstein, the Mummy shines in the cannon of Universal Horror. Karloff’s makeup and portrayal of a reanimated corpse is still fantastic with the tension and horror of the film not portrayed by a mindless creature, but rather a capable and determined sorcerer. Though the film lacks any real action, the entertainment is derived from the exchange of dialogue and the slow unraveling of what the audience has already known from the beginning.

Within a vacuum, The Mummy is a decent and interesting dive into the psyche of early 20th century western culture. It is a film that is filled with intrigue, exploration, and eventual terror at the discoveries found. The film is also interesting in tandem with the eventual B films that followed it. The Karloff vehicle did little to solidify the legacy of the Mummy, aside from being the first. The reanimated corpse of an ancient Egyptian Pharaoh would only come to cultural legacy from the terrible and schlocky films that came after it. The Mummy is an institution that has seen multiple people craft it into an identity, leading to the well known figure lumbering around in toilet paper.