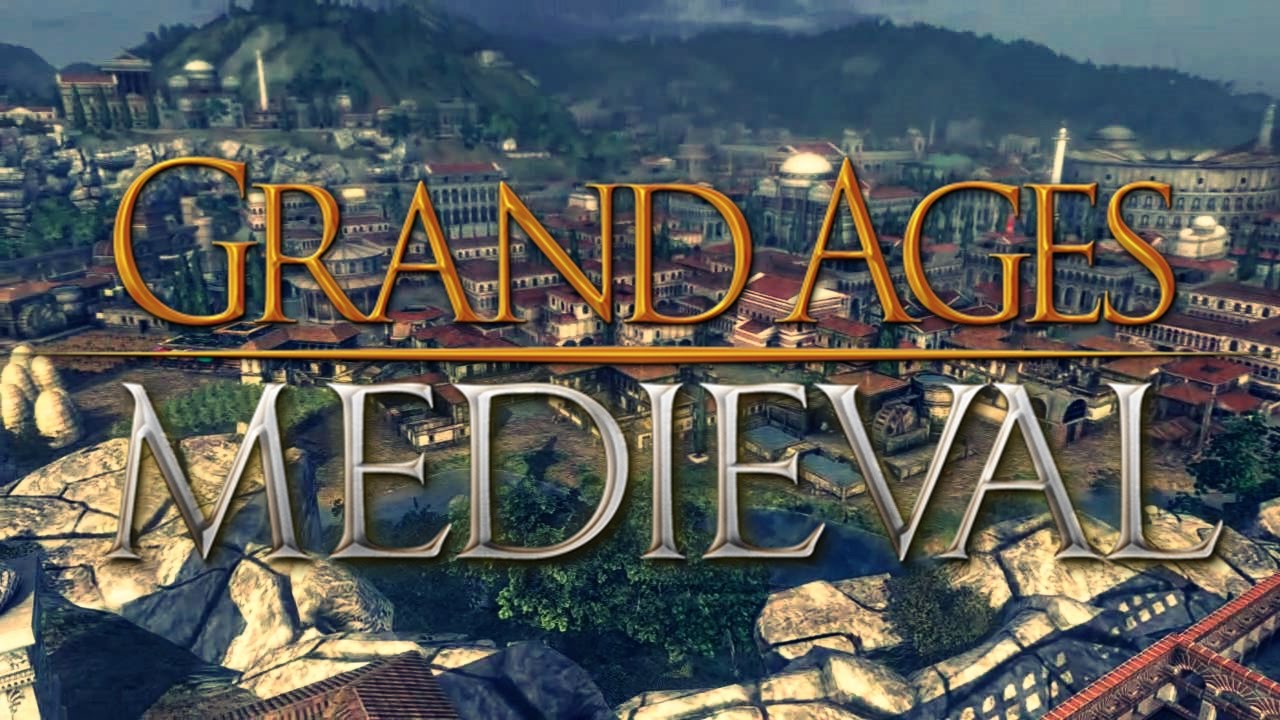 Looking at the box art for Grand Ages: Medieval you might think the presence of an angry, Theoden looking motherfucker staring down at his kingdom like it just shat on the rug is meant to imply this is a game of war and bloodshed – the fire and pikemen behind him certainly do. But if you buy this looking to forge an empire in bloody conquest you’re going to come away disappointed; a more accurate cover would have been him looking angrily down at a thousand pounds of uneaten wheat, and while I wouldn’t have bought that game, I also wouldn’t be as annoyed with it as I am.

Because instead of being a game about military strategy it’s one with an almost exclusive focus on trade. You’ll found cities but only to produce goods, and then more cities to buy those goods. Spreading out lets you find more goods, places with rich, fertile grasslands, honey or good supplies of iron, and then link those cities back to each other, selling the goods back to yourself for a profit. Improving roads and infrastructure costs money but lets you make more faster. Even your enemies aren’t all that interested in a fight, simply because they’d much rather sell you a thousand pounds of salted meat and some trinkets. You’re worth more to them as a trading partner, and they’re worth more to you the same. Besides, conquering them would mean a whole bunch of new infrastructure and trade planning, and you’ve already got enough trouble ensuring your nation doesn’t run out of honey, wheat or whatever useless shit “pomp” is.

It’s ostensibly focused on conquering the world, but aside from the game telling you to do it, there’s no real reason to bother. Sure, locking down landmasses in crisscrossing highways will make you rich, but there’s nothing to spend it on aside from more highways, more cities and more products. Having an army to chase away all the bears is handy, but the combat system is underdeveloped and feels a bit useless. Capturing a city doesn’t mean you make any more money from trading with it and taxes aren’t significant enough to warrant the loss of a trading partner, so it only ever makes sense to attack the small, single town cities that dot the map, and it’s far easier to just bribe them into your empire. It’s all based around developing more and more power, but there’s nothing you actually need any of it for; enemies don’t attack you unless you attack them first and cities are incredibly hard to conquer. Never before have so many died so dully for so little.

The lack of any real end-goal beyond optimization makes it feel something like an ant-farm; everything’s moving but you’re not actually going anywhere. Once you’ve created a decent trade-route, there’s not a lot more to do. Maintaining a military is incredibly expensive and since stabbing people typically prevents them from buying your shit there’s not a lot of incentive to go to war. You’re going to spend a lot of time waiting, watching a number jump around as your cash reserves creep higher and higher. A game of grand ages will certainly feel like a hundred year endeavour, but there’s nothing particularly grand about it.

A game about establishing yourself as a powerful merchant might have been interesting if you didn’t have total command over everything that happens in your kingdom. Since you set up the chains of production yourself, there’s no motivation to negotiate, ally or compromise with your enemies for greatest profit. You simply produce what you need, trade it to yourself, and then sell the final product back to yourself. This is what a profitable empire looks like. This is also what a thankless waste of hour hours looks like. Funny, that.

The more successful your empire is, the less you’re motivated to do anything with it, considering how simplistic the resource production is. As long as each town has a road connection to each other, setting a trader on an automated route will resolve all your financial questions without a moment’s thought. The only real strategy lies in deciding where to position your towns and which resources to specialize in, and despite the size of the maps, you’ll quickly find yourself running out of space, leaving combat your only option for expansion. This is a pain, both because attacking anybody will seriously harm your wallet and because the combat is absolute shite. It’s less interesting than Total War’s and even less exciting than the extreme placidity of Civilization’s. It’s simply about clumping up guys and marching them at your hopefully less clumped foes, then watching numbers dwindle – almost exactly what Crusader Kings had, but without the strategic choice of commanders. And because of the total lack of a complex political system, there’s nothing to keep you engaged. You either win or you don’t, but either way you’re going to spend ages holding the 10x speed button and wishing it were over.

So, to keep track, there’s no political system, simplistic trade, Crusader Kings combat and absolutely nothing else. There’s an absolute lack of depth, which simply isn’t tolerable in a world where so many great strategy games exist. It might have worked as a heavily budget title but for fifty dollars it should be fucking embarrassed at the tremendous pile of things it doesn’t have.

A reason to exist, for example.

The problem is I genuinely can’t imagine who this game is targeted at. Empire builders will find it simplistic and dull compared to things like Civilisation and Europa Universialis, and while you’ll trick a couple into buying it, I’d be surprised if most even noticed it were out in the 3 hours a day they’re not plugging away at those classics, armchair generals will find absolutely nothing of interest in the simplified, skill-free war mechanic, and as a trading simulator it’s harshly limited by the lack of any complexity to its resource production system. Again, there’s nothing offensively bad about it; Frozen Hearth maintains its place atop the throne of shit for worst game I’ve talked about on the site, but It adds nothing at all; to the genre, to your free time, and to the world at large.