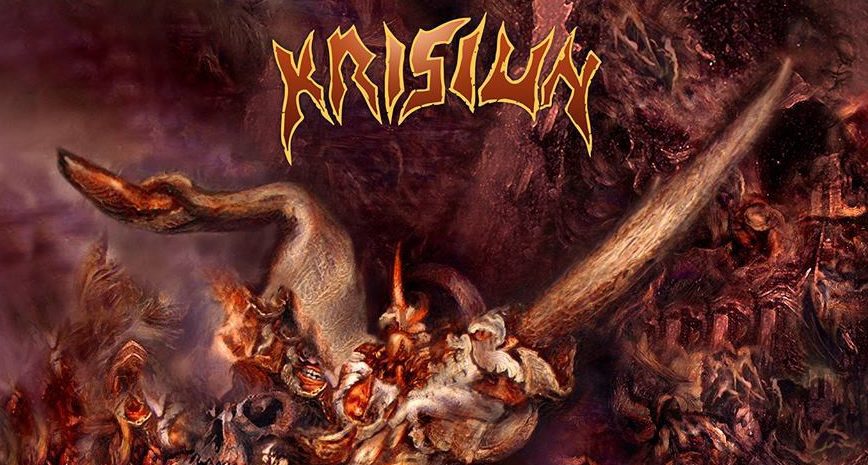 Krisiun are a Brazilian heavy metal outfit most famous for their incredible longevity (all twenty five years of it) and their incredibly regular output (all twelve albums of it).

Perhaps they keep busy as a way to forget, their industriousness a shield from the memories of one terrible night, all those years ago. Maybe they just love their music and hate their day jobs? It’s a question almost as compelling as how three guys managed record twelve albums without losing their collective grips on reality.

There’s no time wasted before introducing the titular fury; “Scars of the hated” emerges with the rapid, energetic rhythm of a song expressly designed for headbanging and does a damn fine job of keeping both its regular rhythm and your interest. It certainly helps that it’s one of the strongest on the album, growing speed culminating in a solo that springs straight from same source they’ve been exploring for their entire 25 year legacy, somehow no less innovative for its retro stylings. This is where they really come together, and the pacing, crunchy riffing and sheer nod-your-head compelling force form a pretty perfect argument as to why these guys are as popular as they are.

It’s a shame then that during the midsection they really start to show their age. Riffs start becoming familiar and their album wide dedication to headbanging falls into a kind of sad predictability. This is especially apparent in the middle few songs of the album, where things begin to blend together. They’re not bad songs exactly, it’s just that they’re all the same mediocre one, with a couple of easily miss-able alterations that just leaves you feeling like they probably should have been. If they’d taken the ideas from everything between “Strength Forged in Fury” and “Isolated Truth”, the middle third of the album, and merged them into one 6 minute song the result might have been something truly memorable. Instead, there’s a 22 minute interlude in which almost nothing interesting happens. It’s perhaps forgivable, considering it’s bookended between two thirds of a great album, but it’s more than a little disappointing; If I weren’t treating this professionally (or as professionally as It’s possible to be while drinking rum at 4am) I likely would’ve given up somewhere around the fittingly named “Soulless Impaler” and missed out on half of what this album has to offer.

That’s a fucking crime, considering I’d have been robbing myself the enjoyment of “Timeless Starvation”, which is both the last track on the album (if you don’t count the 50 second instrumental, and who does?) and arguably the best. It’s a perfect example of what makes these guys worth coming back to after all these years, and so it’s fucking strange to then hide it behind so much filler. Whether it makes the album worth it as a whole is another question entirely, but chances are if you dig any of their earlier stuff, this won’t disappoint.

It’s not going to blow your mind, either, but at least there’s the sense to end on a high.