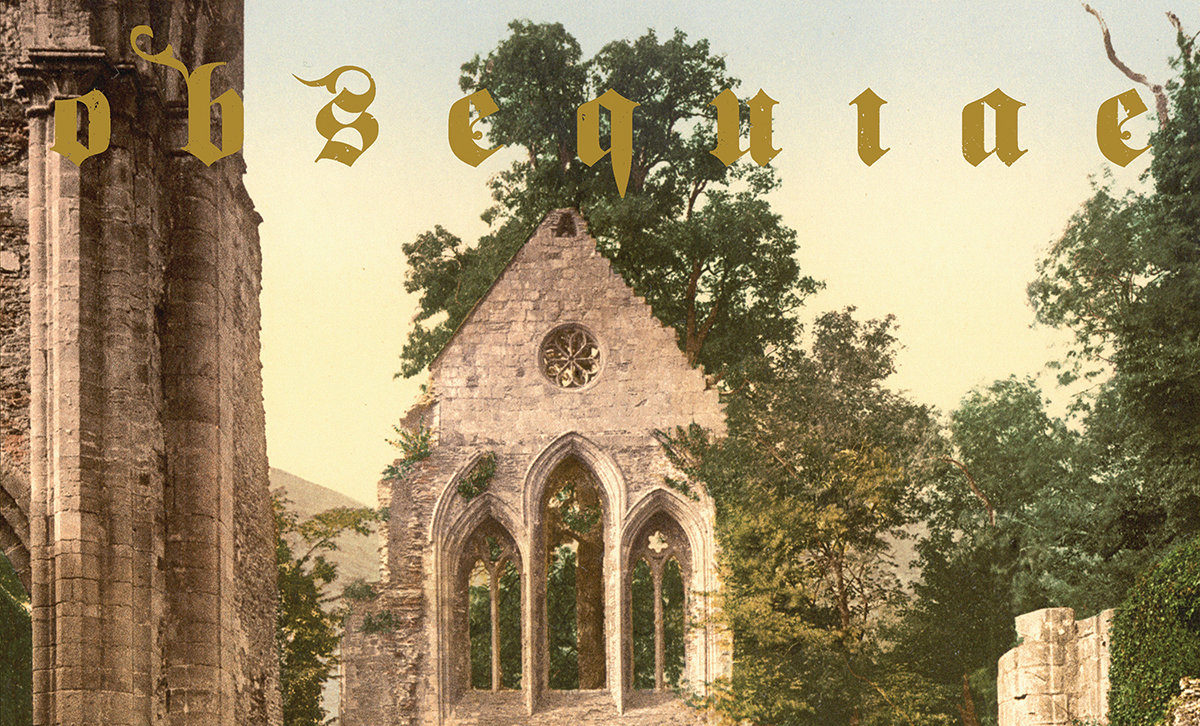 Though categorizing Obsequiae is seemingly easy, fully understanding this US black metal band, who has devoted themselves fully to a medieval aesthetic, may take some time. Okay, I got it. This is a black metal band with a harp. Got it. It is half way through the year and on various lists, a strange name has continued to appear, followed by what sounded like murmurings echoing off a ruined castle. In the highlands of Minnesota sit three musicians who are ready to bridge the time gap between past and present with the lush sound of harp intros.

It goes without saying that the harp portions of Aria of Vernal Tombs, the band’s second full length, is relegated to an incidental role. With that said, the harp instrumentals do act as segments throughout the record and add a very strange yet delightful texture. Though the harp is probably the easiest part to discuss about Aria of Vernal Tombs, the relationship between the vocals and the guitar leads is something that is exquisite if not dreamlike. Obsequiae, since their debut, has managed to make use of the space given to them and make their sound so much greater than the musicians participating. It would be easy to talk about harp in black metal but as a whole, Aria of Vernal Tombs is a fantastic metal album despite its unique instruments. The production of this album seems to be entirely a studio construction, with multiple duties being given to each instrument. This fact is not uncommon to black metal, yet Aria of Vernal Tombs seems unique when compared to the rest of 2015 black metal given its complexity and idiosyncratic nature. At the end of its somewhat short running time, one realizes this record is both entertaining and memorable to stand out among a sea of other bands doing kinda the same thing.

Though Hollywood Metal mainly reviews power, progressive, and epic heavy metal, other styles can be included granted they possess the right amount of aesthetic. What that aesthetic is exactly I could not describe, but I feel Obsequiae fits right in with Sword and Sorcery comics, fantasy films, and television shows that feature high escapism and adventure. The band’s dedication to mystic lyrics that drape upon already accessible melodies only makes the harsh template of black metal that much more interesting. Aria of Vernal Tombs was a surprise to stumble upon following those murmurs at the castle walls. It will be interesting to see how this somewhat unknown black metal band fairs throughout the year. Perhaps 2015 will be the year of the harp.