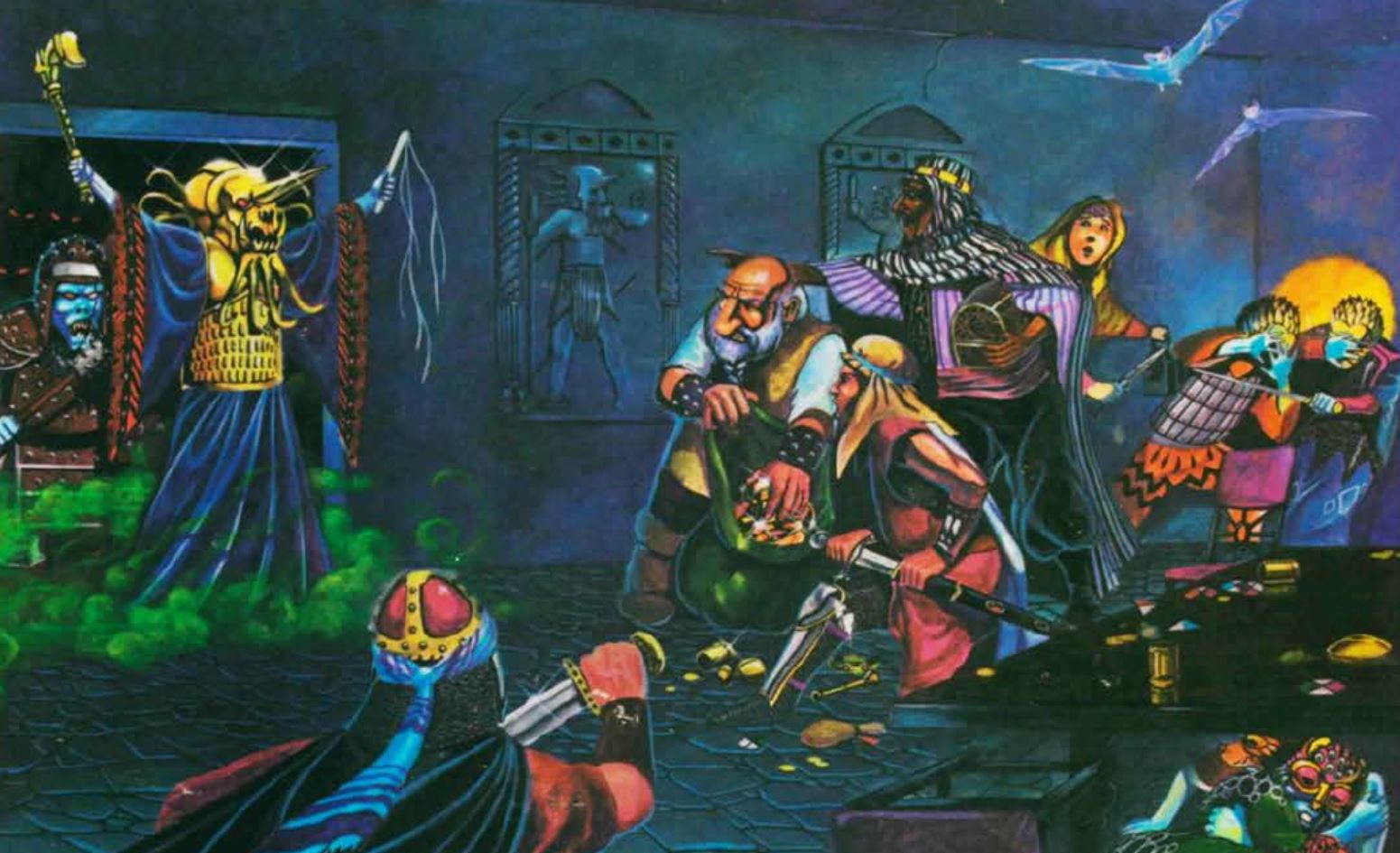 This article represents my continuation into the world of old school roleplaying games. The adventure for me has been to try to replicate, piece together, and imagine the experience of roleplaying in the 1980’s. This has been done by introducing my current play group to clones of older systems and even the preserved systems themselves. I took them last time through haunted halls with Labyrinth Lord and Stonehell Dungeon. Because most of them threatened me with bodily harm if we were to ever dive into a massive megadungeon again, I decided to briefly touch upon one of the more renowned hallmarks of Dungeons and Dragons history with The Lost City. I find myself at night reading old dungeon modules fully engrossed in a tangential and theoretical experience of early 80’s roleplaying adventures. I do not get to run every adventure I read but there are times when my group allows me to take them into the dungeon.

The Lost City was published for the Dungeons and Dragons Basic set in 1982. Written by the Basic Set designer Tom Moldvay, The Lost City and has since become a classic adventure perhaps run through by thousands of adventure groups. There are many dungeon modules which appear on Top X lists when reviewing old RPG adventures. Though the names Ravenloft, Temple of Elemental Evil, and Tomb of Horrors usually congregate at the top, The lost City makes its way on lists given a big enough scope. What makes this particular module so unique over the dozens of other modules published at the same time? Perhaps it was the ability not to clobber everything in sight and maybe to use one’s head instead of their bashing stick. Oh, there still is bashing involved, that comes after the talking doesn’t work. The plot hooks for The Lost City begin like many other with the adventures finding themselves lost in the fucking desert and no other way to go then to explore the underbelly of a lost civilization who has taken refuge in a step pyramid. I enjoy these types of seeds as they can lay waiting in just about any campaign or scenario. In fact, one can punish a group for destroying their current city and then getting lost in the fucking desert. With this seed there is an urgency to lean on the players as they are suppose to be exhausted, starving, and dying of thirst. There is little that these smart asses can do than to follow along the steps which travels downward into adventure. A step pyramid is the largest structure in the abandoned desert city and represents to top of a massive subterranean networks of caves and dwellings which house warring factions as well as an evil demigod. Now look at what you have done.

The background information for the Lost City lies in a once prosperous civilization named Cynidicea which fell under charm of Zargon, evil monster found underneath their pyramid. Zargon not only killed the worked digging but began hunting citizens of the citizens of Cynidicea which brought existential woe to the civilization. Death cults began to arise in service of Zargon who saw the beast as as a god. The followers of Zargon took to strange drink and drugs and overtime the civilization fell under a a bizarre intoxication of its citizens. Eventually barbarian hordes invaded Cynidicea and its citizens fled underground to rebuilt their civilization in the service of Zargon. Since the ruling zeitgeist involved the worship of Zargon, the old gods, Gorm, Usamigaras, and Madarua became out of fashion and its followers cast out as cults of their own. The followers of the old gods not only are openly hostile to the Priests and followers of Zargon but also other members of different gods. This is the subterranean landscape in which the adventurers find themselves in — an underground city which is rife with people who hate each other despite the presence of an evil beast running the show.

There is a joke somewhere. If you remember, Basic/Expert Dungeons and Dragons, as well as early editions of the games, emphasized the exploration/rest model where there was a safe zone and then the wilderness is where you would find caves, crypts, and castles. There you would conduct explorations, kill monsters, and gather the most important resource of the game which was treasure. With treasure you could buy shit and progress as a character. The Lost City is supposing that the character has no town to go back to so they set up rest stations on each of the levels that are, surprise, guarded by each of the fringe cults of dedicated to the old gods. This forced social interaction differs from early DND where anything seen in a damn dungeons was there to kill. You could still do a extermination campaign where you clean house but it was wiser to accept membership in each of the cults. Because D&D was still primitive in its rules on social engagement with Non Player Character (NPC) these cults acted however the Dungeon-master wanted them to. Besides a basic framework of warrior, magic user, and amazonian, the world was wide open on how these cults presented themselves to the players. This eventually led to one of the more hilarious recreation of Revenge of the Nerds with the cult of the Gorm worshiping jocks, the studious The Magi of Usamigaras, and…well girls. Even if this joke was sort of stupid, it allowed for one of the more memorable bits of levity to enter our game.

Let us face it, dungeon crawling can be tedious. From mapping to grinding through countless number of rooms, engagement for players can be tough given the whole nature of the game. This is why the Labyrinth Lord game went off the rails due to its enormity. The Lost City differs as those cults really throw in interest to illuminate the darkened halls. With Gorm on the top level followed by Usamigaras and Madarua on the lower levels, the first section of the Lost City can lead to hilarity with the party joining different cults and having to socially interact and hide affiliation when talking to different members. There is a hilarity which involves the players who join one cult having to hide affiliation when they run into another. Jokes and situational comedy can lead to fun times which break the monotony of dungeon crawling. Though my group only finished the first few levels, the cult of Gorm, Usamigaras, and Madarua became welcome houses for players to pit themselves against the lower portion of the temple.

Social interaction with characters would eventually grow in Dungeons and Dragons to the point where speeches and NPC engagement would have its own subsystems. The Lost City represents a blossoming point in Dungeons and Dragons history where interaction with the environment continued to step beyond exploration with occasional bloodshed. If one was getting into playing old systems, this would be one of the few modules recommended to begin as its pacing, social interaction cues, and basic open ended nature makes it a hoot to run in a few sessions. There are of course rules for further delving into upper levels but I still have to ease my group into these adventures before settling in for multiple months of dungeon crawlers.