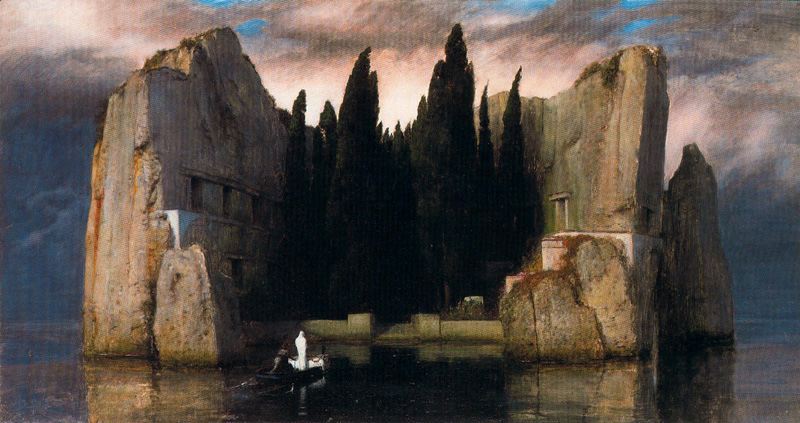 This article continues my exploration into the use of the supernatural and fantastic within the world of art. From the trivial to the classical, fantasy within art has been employed in various fashions and through numerous means. We have looked at the work of the symbolists as a delver into fantastical imagery. The life of Arnold Böcklin is not something of great note as this Swiss artist came through life most like other artists of the same period, studying at an academy and under different tutors, and with time to spent daydreaming about mythology. At the time of his education, there was no major war to be fought and Böcklin spent his time in Rome enshrouded with old architecture and even older tales. He died at the age of 73 in January of 1901 and is currently buried in Italy. While the life of Arnold Böcklin may not have any spectacular notes of grandeur, his obsessions with allegory, mythology, and death make for some striking pieces — one with quiet reverence to the inevitable march of time.

…a dream picture: it must produce such a stillness that one would be awed by a knock on the door. 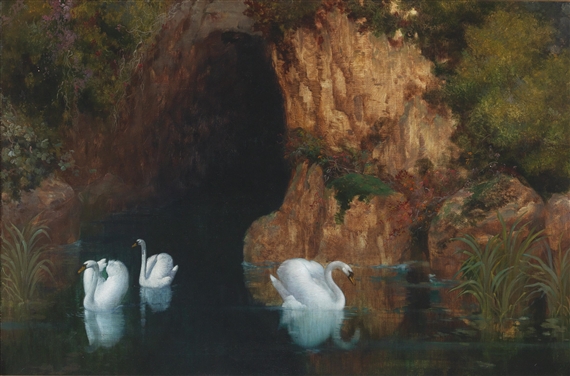 One of the more famous pieces by Böcklin, who I will always have to copy and paste the name, is Isle of the Dead painting between 1880 and 1886 (Featured at top). I say between that time as numerous versions of the bleak and foreboding painting were made as it was historically popular among just about everyone. This painting was so popular that is has almost become inseparable from its artist and Böcklin inescapable from its legacy. The picture is a dream like image of an idyllic yet cold looking island being visited by small figures in a boat. The restful and silent nature of the picture combined with the auspicious title makes for easy connections. Add to the the fact, the actual foliage and subject matter is taken from a local cemetery — which his youngest children are buried, and one has a few small steps to an allegory on the finality and peace of death. the light which is projected behind the figures suggests a setting sun which continues the allegory of the autumnal passage of life in death. Its sepulchre like monoliths which encase the island combined with the peaceful focus of trees make this place inviting and final. Böcklin’s work connects with viewers on a very basic level through its acknowledgment of death and inevitability. Its dreamlike atmosphere and surreal qualities give it an uncanny feeling which resonates through its soft palette. Though The Isle of the Dead has become Böcklin’s most famous work, other pieces, like 185’s Sacred Wood / Sacred Grove is even more alluring in its near mystical themes of nature worship and transcendence beyond the mortal plane. I included two digital versions of this and do not know which is the correct color tone. Much like the Isle of the Dead, this second piece is a different picture just seemly a revision or draft. While the first has a very warm and inviting tone to it, the second one holds even more mystery with the red color used as a beacon in a sea of umber and black. Both images exude a feeling of uncanny silence and mystical reverence for a location which is unannounced and seemly holy by its devotees. Whether righteous or sinister in nature or something in between, the reverence felt in these pictures is something that is most striking and alluring. There is something mystical about Böcklin’s work and the fact it is a fantasy artist that both lies on the outskirts of art history and more mainstream fantasy art is something which makes the themes of quiet even more rich. Somewhere between Frazetta and Monet lies the work of Böcklin whose paintings seem to freeze unbelievable moments in time. Though Isle of the Dead is his most famous to the point of being oversaturated, its relevance among all viewers is something which makes the idea of death worship so much more engaging and entertaining. Even if those morbid ideals are not held by its viewer, one can still enjoy the dreamy stillness of eternity.