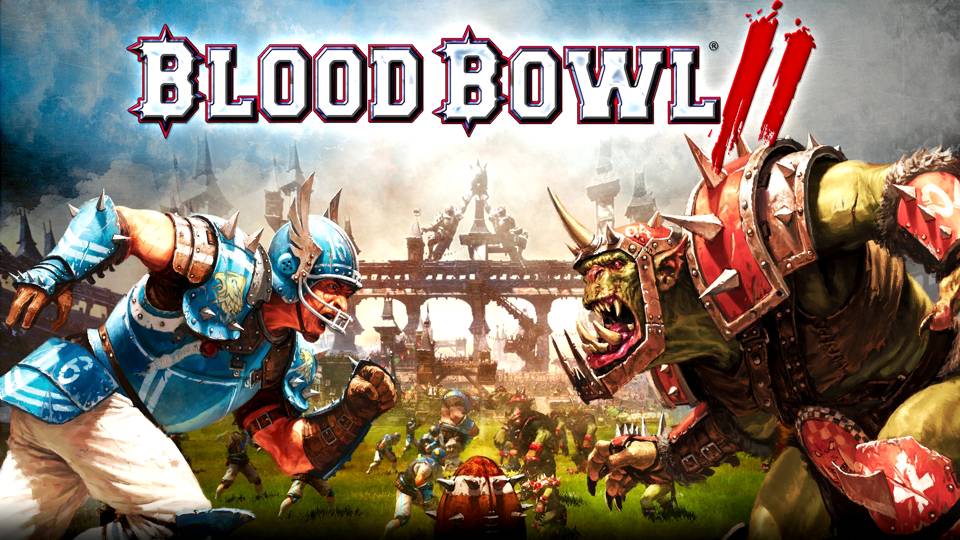 If you’re anything like me, you’ve always been put off traditional sports by the ludicrous pay checks, constant scandals and persistent lack of incentivised, legitimized murder. Bloodbowl was Games Workshop’s attempt to fix that, back when they still made games you could play without re-mortgaging your house. Bloodbowl 2 is, oddly enough, the fourth title released by Cyanide to bring that particular blend of football and fantasy violence to everyone who doesn’t own an Olympic sized dining table.

It’s framed and presented explicitly like a sporting event, complete with constant references to Cabalvision and Facetome that, while perhaps a little asinine, works as an allusion to something equally asinine, so it comes across as knowing and intentional rather than irritating.

The two commentators, an ogre and a Viking, provide much needed personality to what would otherwise be an entirely dry endeavour game. While the writing is clumsy at times (the campaign begins with a Frozen reference, which would have been dated months ago) it’s still brilliantly acted, with both managing to remain at least engaging hours after you’ve heard everything. It’s a hell of an achievement to write personality in such a way that it doesn’t become furiously irritating on the second hearing, but it’s kind of a necessity here. They’ve pulled it off, mostly. It can’t hurt that you’re never forced to listen, as they talk either during skippable cutscenes or the action itself, where you’ve got more important things to think about. Mostly they just blather about lore fluff anyway, which does a good job of making this feel like an ongoing, engaging sport rather than what it is; a series of short, only vaguely connected strategy exercises. No matter how wealthy you become, you never find the time to buy those goblins pants

Despite the sporty covering, this is basically a turn based, tabletop strategy game in which the goal is moving a ball from one end of the field to the other, and stopping anybody from doing the opposite. Where it gets interesting is the way you decide to do this. Human teams basically find themselves playing a reasonable game of rugby but with only more punching, but dwarves, due to being short, fat, slow piles of muscle tend to form up and punch their way through the opposition, kicking their foes down the pitch in a death march of determination. It’s not quite as epic or exciting as actual battle, but it sure kicks the piss out of Madden.

There’s an obvious complaint that could be made about the lack of team variety. Bloodbowl 2 only comes with eight, while the final edition of the original came with all 23. I don’t see that as a massive issue, partially because it was the only the fourth release of Bloodbowl that included 23 characters, after three years of excellent post-release support, and partially because, of those 23 characters, about ten felt distinct from the rest in any way but aesthetically, with more than a few being entirely hopeless is serious competition. The goblin team, famously, was entirely built around shanking each other with chainsaws before the referee realized what the fuck was going on, which sounds fucking awesome if you’ve never played them but is a hideous bumble-fuck when all your players disappear halfway through the first half and you’re left with a bunch of fun-sized incompetent snot-lings. Bloodbowl 2, on the other hand, makes the bold decision to only include teams that make fucking sense. The lack of weaponry doesn’t equal a lack of violence, thank nuffle

It’s basically a digitized board-game, complete with simulated dice-rolls to determine basically everything you might conceivably fail and a re-roll mechanic that enables you the chance to to un-fuck yourself whenever the die decree you should, in fact, fuck yourself. This is because, no matter your advantage, it only equates to more dice to pick a result from, and so it’s entirely possible for a muscular giant to roll three “Kick your own ass” results simultaneously and lose a fight to a goblin. With a re-roll, it’s entirely possible to end up with a worse result, but that’s Games Workshop strategy for you. You can help weigh the odds in your favor, but there’s no such thing as a guaranteed win. On one hand this keeps it interesting, and the absolute fury you’ll feel when a player who should absolutely not be able to evade your guard scores a game winning touchdown is only matched by the sigh of relief when a spry elven warrior finds himself face first in the mud due to the improbably accurate knee of a daydreaming ork.

If all this sounds like dry, uninspiring nonsense, then the game will do nothing to convince you further. But if you’re the kind of person with an interest in the world’s first perma-death sports videogame, look no further.