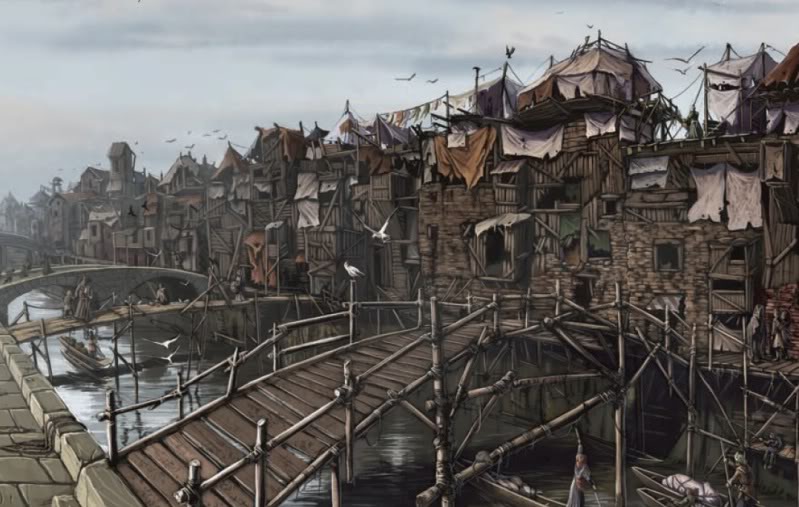 This is a continuation of my Pathfinder campaign as GM running through one of the more famous campaigns The Curse of the Cirmson Throne. As reported last log, Korvosa is on the edge of anarchy with the death of its king and the mysterious regency of the Queen. These events eventually become the problems of the party where they emerge from dealing with Gadren Lamm to find themselves the errand boys and girls for the Korvosa guard. How did this happen? Well they found the Queen’s stolen brooch in the possession of Lamm and being good adventurers, they return it to the castle only to find themselves asked by Queen to restore order to her kingdom. This beings the long train of missions which were not only fun but hilariously generic not in their construction but how they are presented.

“Thank you for returning this item, I wish I could talk more but something else has come up”

For as much as I am going to rag on this portion of Curse of the Crimson Throne, the sandbox style of this RPG paly is a little bit more freeing and aside from the Korvosa guard missions, the encounters were interesting to run at any point. From an unruly mob, to a drunken and disgraced guard, the climate of Korvosa following the kings death is frayed. This is why the players should feel empowered to help out for no other reason than because they were asked to. The main missions see a string of involved house calls from quashing a guard revolt in a meat shop, procuring blackmail material from the owner of a den of vice, to finally chasing down suspect in the death of the king. All of these played differently and mixed in with the smaller encounters gave the middle part of the first chapter a varied and interesting landscape. From what I have read regarding the later adventure was the importance that the players find Korvosa home. As with any campaign, you want the players to care about their area whether nomadic or homebodies so they can make good decisions. Not caring about ones environment leads to nihilistic attitudes which will eventually devolve into slapdash choices. Though the “do this next” style of RPG isn’t the most original, my players got at least a sense of who is good, who is probably bad, and who needs to be killed. If at the very least, they thought twice about murdering citizens.

Perhaps the highlight from these sessions (aside from Devargo’s vice den which was made a mockery when I played the surely vice lord as Dr. Frankenfurter from Rocky Horror) was the chase scene from the shingles. The platers are sent to the Shingles which is the low income claustrophobic section of the city to find the suspect in the Kings death. The suspect however is believed to be a scapegoat just to give the players reason not to kick down the door and shoot on site. The scene develops as a chase scene on top of the roofs of the shingles. This worked out wonderful since I ran a modified version of Pathfinder’s chase rules as in modified I mean I did it not really the way they wanted me to.

Pathfinder can be a slog when it comes to combat and their chase rules are no different. For something as cinematic as a high speed chase through alleys and rooftops, the actual chase rules feel more like doing your taxes than anything resembling excitement. The general idea for Chases is that there are X number of cards on the table and to advance to the next card, one has to get through an obstacle. Sounds fine until you add full round actions, drawing weapons, and melee rules into the chase. The chase progresses like combat with people going in initiative order hoping to not get “stuck on a card.” Super boring. What Pathfinder does have right is chase cards where it presents an obstacle and two ways of rolling out of it using skills. Running a chase with rules as written takes a long time but as a short cinematic burst, one can just use these chase cards as a quick movie scene. In the story, the target escaped out of her apartment, which lead to a very exciting and short chase scene where an obstacle was presented and everyone rolling out of it or dropping one card behind. These obstacles were things like a clothesline, an angry vagrant, a very steep roof. “Making the roll” kept the player on the card but exceeding by 5 allowed them to move up one. Once they were on the same card as the target, they could tackle or melee them to death.

In the end, modified or not, the players apprehended the target and put her away into hiding. Much like the previous string of missions, the hiding away of the Queen’s scapegoat led into the next mission was to find the dead body of a Shoanti native. The Shoanti are the nomadic people of the region and atleast to this story represent the population which is at tense peace with Korvosa and the unrest in the city led to the death of a prominet native. The players are tasked with finding his body hidden away in a dungeon cemetery since it was taken by Gaedren Lamm’s son Roth (DUN DUN DUUUUUUU). the dungeon is called the Dead Warrens and information is literally spelled out with simple questions the players could ask. My players did none of that and ran off to probably get murdered in the darkness.