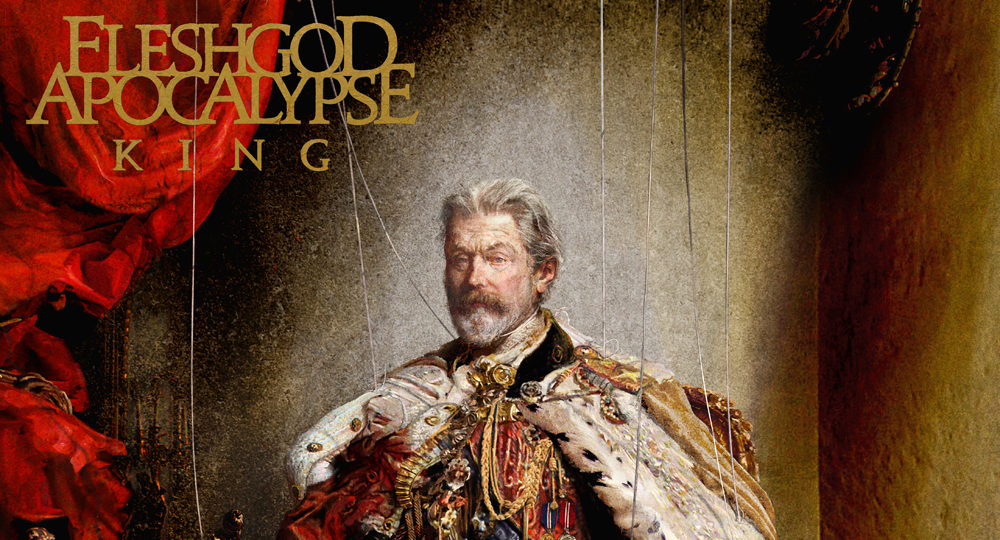 These are the questions that keep me up at night.

There doesn’t seem to be an answer either. At best I can imagine some towering form of coalescent meat, squirming and squealing and shitting in one of the dimensions the other gods avoid, trapped forever in the celestial equivalent of the bad part of town. Why you’d name your band after that is truly beyond me.

Why you’d ignore that band, though, makes even less sense. Not because they’re formless fleshbominations, but because they’re fucking awesome, putting out album after album of memorable, orchestral death metal for just over nine years without ever making a (serious) misstep. “King” is their latest and strangest, an album in which almost every sound comes with its own “Orchestral version”, just in case you were wondering what they’d sound like played by fifty elderly professionals rather than five enthusiastic rebels.

It begins frenetically enough with “The Fool” with its blindingly fast harpsichord intro before breaking down to more recognizable Fleshgod style heaviness, but that bizarre rhythm never quite leaves, hovering oddly at the edge of perception. It’s the sort of contrasting tone that Fleshgod are known for and it’s more developed than ever; the balance finer and less clumsy than “Labyrinth”, whilst packing more of a punch, and stating, right from the beginning that this might be a very different album that you’re expecting.

“Paramour” continues this, being a fucking work of absurdity the likes of which you almost never hear: seemingly ripped direct from an opera, it’s a masterwork in the field of deep voiced women singing over gentle piano. Not exactly what you’d expect, and seemingly not what the album itself expected, as it’s quickly overtaken by one of the roughest guitar sections Fleshgod have ever produced in the tremendously energetic “And the Vulture Beholds”.

Speaking of tremendously energetic, “Syphilis” moves with a beat that is fucking infectious . The pulsating rhythm, the slow burn, the way it creeps into your head, there’s a fucking impact to it that’s unshakable. Its orchestral version builds on this too, turning that raw metal into cinematic grandeur of the kind you only usually hear to a backdrop of stony-faced heroes giving the shit-eye to a gryphon. It’s some truly incredibly orchestral work, and the fact it comes from the same vein as a power metal track named after chronic dick itch is fucking incredible.

“Incredible” is a consistent theme for the orchestral adaptations; each one is the kind of grand, sweeping score that Peter Jackson thinks occurs naturally in the clouds above New Zealand. Each orchestral track cries out for a harsh, interesting movie montage to ride over. Bold, commanding and excellently produced, it’s the perfect answer to that one asshole who insists death metal only exists because the its artists can’t manage “real music”.