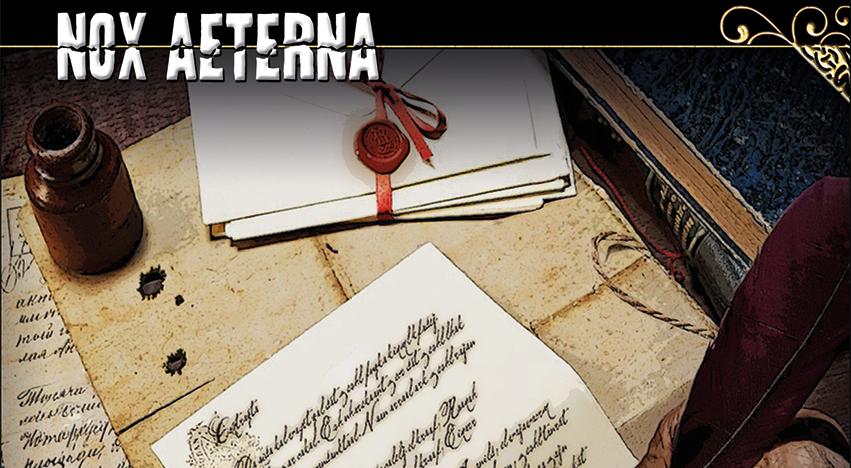 Nox Aeterna is many things; an ancient Latin curse, a horror mod for Half-Life 2 and Morgoth’s favorite party trick. And now, with their latest album “Desperation Deal”, I know they’re a Dutch melodo-death metal band too. This means, of course, that “Desperation Deal” is pretty much their first impression. It’s also a concept album, which endeared them to me immediately. Any band willing to put out something as weird and niche as a concept album is clearly somebody to watch, if not for their talent and confidence then because it never serves to take your eyes off a maniac.

The titular concept concerns the struggle of a couple of guys who stumble ass-backwards into slavery and demonic dealings. It should be pretty obvious to everyone right there how well this is going to go, but as usual nobody in fiction has ever read a fucking book. Our heroes, Einarr and Jorund (who I can’t help but imagine as dwarfs for some reason) presumably go on to accomplish some heavy shit but unfortunately I can’t be much more specific. Other than a couple of moments, most notably in “Ranaaah’s Endgame” I couldn’t tell what the fuck anybody was saying. It’s headbanging music mostly, hard and fast without too much vocal focus, which is weird considering how narrative the lyrics are. This is especially noticeable on “Einarr’s Remembrance”, where the rhythm of the instruments matches the beat of the vocals, producing something that’s great for headbanging but only if you don’t care about the lyrics. You’ve really got to squint with your ears to pick up what the guy’s trying to say. Great for moshing, but not so good if you want to growl along, and fucking baffling if you’re meant to follow the story. You don’t need to to enjoy yourself though, and thank fuck for that.

Musically there’s a clear focus on Death Metal. From time to time it breaks free of the more traditional heavy sound, pulling synth into the mix with an oddly nineties flair that’s as glorious as it is brief. “Einarr’s remembrance”’s opening minute is my favorite example of this. While the rest of the song, with its heavy guitar rhythm and growling, calls to mind a heavyset guy on a pale horse, this is different; it’s the strange, electronic sound of a hairy chested man surfing a mecha-unicorn through a solar flare while rocking out on the keytar. Not the image you’d expect considering the themes of the album, but an image that once I’d imagined I couldn’t get out of my head.

Aside from these momentary oddities there’s some great, crunchy guitar work with a nice Death Metal feel and a refreshingly weird focus on synth keyboard. Considering this is the first album of an unknown band it’s perhaps surprising how polished it sounds. Think Death with just a hint of melodic to keep things weird. There’s perhaps a little more experimental than you might expect, with weird keyboard effects and solos that veer between Amon Amarth and Steel Panther. It’s a hell of a mix, and does its bit to set them apart from the crowd.

Unfortunately though, it doesn’t do enough. Most of the time the album blends together, and between the weirder moments it’s hard to tell one song from another. Perhaps this is an attempt to prove they really belong in the Death Metal genre, but if so it’s an insecurity they don’t need. It’s done enough to make sure I’ll be looking out for the next, but not enough that I can recommend them wholeheartedly. Maybe give their YouTube channel a listen, and buy if you fancy more of the same.