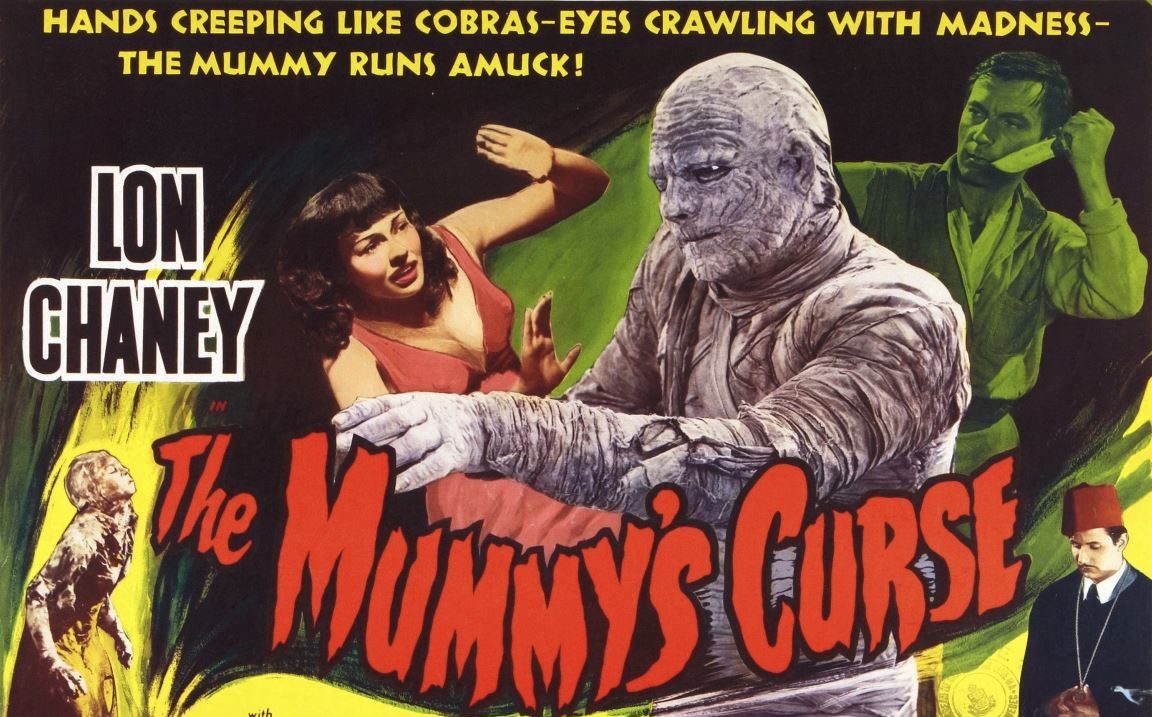 It is important to note that I reached into a metaphorical bag of Mummy themed movies and pulled out The Mummy’s Curse with seemingly random chance. This film is the last of a four part reboot of the original Mummy character, Imhotep, originally played by Boris Karloff. The Mummy’s Hand, The Mummy’s Tomb, The Mummy’s Ghost, and the Mummy’s Curse were all released within 4 years of each other and, aside from the first film, all star Lon Chaney as Kharis the lumbering goon. The Mummy’s Curse ends a cycle of subpar horror films and is not only the worse of the series but perhaps one of the worst films produced by Universal in this time period.

I feel The Mummy’s Curse is important to analyze because it showcases a very palatable lack of care when it came to horror sequels in the 1940’s. While other films such as Son of Dracula took care to establish a continuation of the original story, The Mummy’s Curse feels so eager to just throw the star into whatever narration was hastily constructed. This film would mirror the Monster Mash films during Universal’s attempt to squeeze whatever blood was left from the horror stone. While Hand, Tomb, and Ghost are all better films, The Mummy’s Curse is a good weathervane for the culture of quality that populated the 1940’s landscape of cinematic horror. Musical interludes in old horror films are always weird and ill-fitting within a scene.

The Mummy’s Curse is the end of a reasonable construction of events taking place throughout four films. I say reasonable incredibly lightly. The original story of a prince’s son being so obsessed with a fallen love that he turned to magic to cheat death is still recounted in this film seeing an occultist priest trying to resurrect Kharis. The whole Mummy series focuses on the corpse of Princess Ananka being removed from Egypt and taken to Massachusetts. After a series of risings, falling, and reincarnations, the undead corpse of Kharis and his beloved Ananka are sunk in the cold embrace of a quicksand located in the cold swamp of Massachusetts. The only reason why I am mentioning this is that the location of The Mummy’s Curse, a follow-up to The Mummy’s Ghost, takes place thousands of miles south…with the same corpse awaking up seemingly in the same place. Oh yeah, the film is also set way in the future circa 1995. Here is an example of a production that wanted to put in the least amount of effort and cash a silent paycheck.

The character of the Mummy has changed since its original inception. The Mummy’s Curse, much like the previous films, sees the Mummy as a mindless monster rather than a capable and intelligent foe, such as in the original 1932 film. The Mummy’s Curse sees the title villain as something like a Frankenstein, which swipes at people who are not paying attention and moves at less than 2 miles per hour. While I appreciate this is the role in which the monster eventually found himself, the original incarnation as an immortal sorcerer was more commanding than the toilet paper zombie. I feel this dumbing down of the character is a part of the general lack of attention to craft and caring. A mindless monster is what was needed whether or not it made sense to the film.

With all of this discussion around the set up for the Mummy’s Curse, there isn’t a lot of talk about the actual plot. That is because there isn’t one. There is some initial backstory of a swamp being drained and a few stereotypical workers being spooked about tales of a Mummy, despite no one acknowledging that notion is completely fucking absurd. The same rouge priests are resurrecting the mindless monster for reasons still unknown. Kharis, the monster, wants nothing more than to be with his beloved princess so he will lumber around in dirty gauze until he finds her. Ananka, after awaking in a shallow grave, wakes up without any memories and is soon taken in by a local scientist and given a job in the research department. What is this film? Why does it exist? I can appreciate the pulpy charm of slightly bad horror films. I feel certain films, despite their flaws, are still enjoyable. The Mummy’s Curse is neither as its lack of reason and effort make it a terrible bore as well as an illogical film. One of the few salvageable aspects of the Mummy’s Curse, however, is the performance by Martin Kosleck as the occult priest, who is instrumental in Kharis’ return. Here is a man, who despite not making intentions clear, is believable as a slimy mortal agent and the master of the monster. Kosleck’s performance may have been enhanced by the literal cast of buffoonery, which either adds over- or under-acting to every scene. Kosleck also proves pivotal in leading all of the principal characters to an abandoned monastery where the film ends.

I am going to be completely honest in saying that the end of The Mummy’s Curse is a little muddy and I didn’t understand it. I know there is some trickery by the occult priest and a few people who went missing. Ragheb, the priest, and the dashing semi-hero, James Heley engage in a fight in the old monastery. Kharis then turns on Ragheb and brings the walls of the monastery collapsing down in a fit of rage. Ananka, who was then kidnapped, is turned back into a corpse and remains mummified. The film ends more confusing than it began and everyone is more upset than when then ever before.

I feel that watching bad horror films is just as important as good ones so people can see the diversity in production and performance. Gems and renounced classics are immortalized because they rose above, in terms of quality, past their peers. The Mummy’s Curse was the result of trying to grind out as many Mummy related films before an audience stopped caring. Ironically, it was perhaps due to the over saturation of the character that the original subtle variations of a resurrected corpse became so cartoonish and unfrightening.