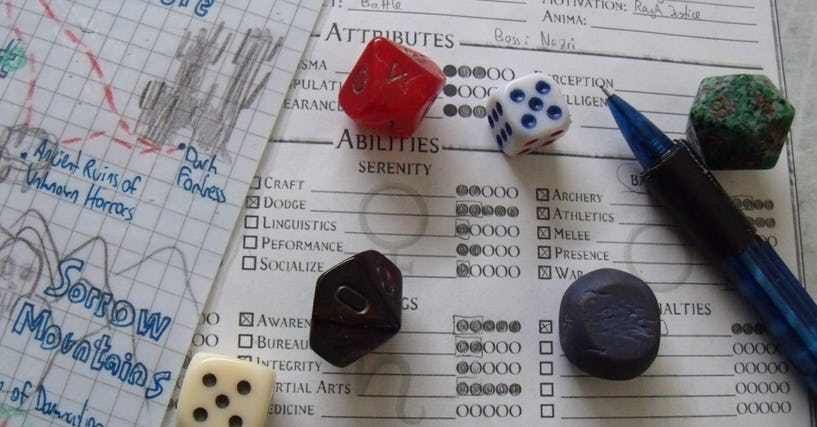 The Crypt of Veritas (DrivethruRPG)

I do not know how we got here but here I am. Solo RPGs are a natural progression for anyone slightly into solitaire boardgames or video game RPGs, though the later might require a step into acceptance. The acceptance comes that you will be playing games by yourself and the fun will be discovering and unlocking entertainment through a preplanned module. The only difference between solo tabletop RPGs and video games is that you will be using pen and paper instead of an electronic medium. Also, one will look way weirder than the other.

Solo RPGs, for me, came out of a desire to experience a story outside of a gaming group as well as a chance to dive into a niche hobby to go along with an already niche genre of music like dungeon synth. I started to collect table games that I could play which eventually led me into my solo Gloomhaven campaign. This solitaire experience also came as a strange desire to play through modules that embraced tabletop gaming but also go against the spirit of tabletop gaming. There is an inherent social aspect to both boardgames and tabletop RPGS as a collaboration of either narrative or strategy with solitaire gaming being on the outside. Solo RPGs are more extreme than solitaire boardgaming just for the fact RPGs were originally designed as a narrative conversation between a game master and players controlling characters. Solo RPGs are also more rare and more wild with their functionality. For a solo RPG to work you would be controlling not only a character but the machinations of the narrative. You also have to accept the fact you will have traveled further, in terms of experience, than anyone else you may have known.

My initial voyage into solo RPGs was Crypt of Veritias (2014) as the first in a series of “Pocket Dungeons” from Golden Griffon Games. This discovery came after a brief search into solo RPGs, and also from the review channel linked below, which then were classified as a Solitaire Adventures with RPG mechanics. This led into looking at Solitaire Adventures which led into the broad genre of gamebooks which then led to a few instances of 80’s interactive fiction. If this all sounds familiar since you read Choose Your Own Adventure Books, then you are apart of a generation that grew up on interactive fiction. Since I share the same sort of generational link, I found the genre to be interesting and fascinating. The fact the 1980’s had a small golden age of interactive fiction to coincide with the growth of tabletop RPGs is easy to connect as there seemed to be a market of people who wanted to immerse themselves into narratives both with friends and by themselves.

The Crypt of Veritas, as an intro solo RPG, possessed a very simple mechanism of dungeon crawling with two dice and a lockout system of magic spells. The goal of the game was to explore a dungeon, gather items, and ultimately kill the boss of the dungeon without dying. The exploration was handled in a matrix where you would choose an avenue and look on the other side for “chambers” that would have an encounter on it. Some of these encounters would be monsters and others would be objects or events that would requires choices. Combat was handled with opposing dice rolls that tested body and mind with the winner dealing a point of damage to the stat. If one of your stats would be exhausted, you either die or turn to a gibbering mad adventurer. The whole experience was a wonderful time with most of the novelty being fresh in an elegant mechanical package. Replay value is near impossible though without ruining the initial experience so if you would die, you could try again but most of the path and encounters would be already known. I do not think this matters. The fact the adventure costs around 2$ and provides a few hours of entertainment is not bad given the dollar to experience ratio of other media. Add to this the wonder of knowing that you are engaged with something as intimadte as a solo RPG and rolling dice by yourself, getting excited about finding a kick ass weapon all without a device plugged in and you have yourself a glorious afternoon.