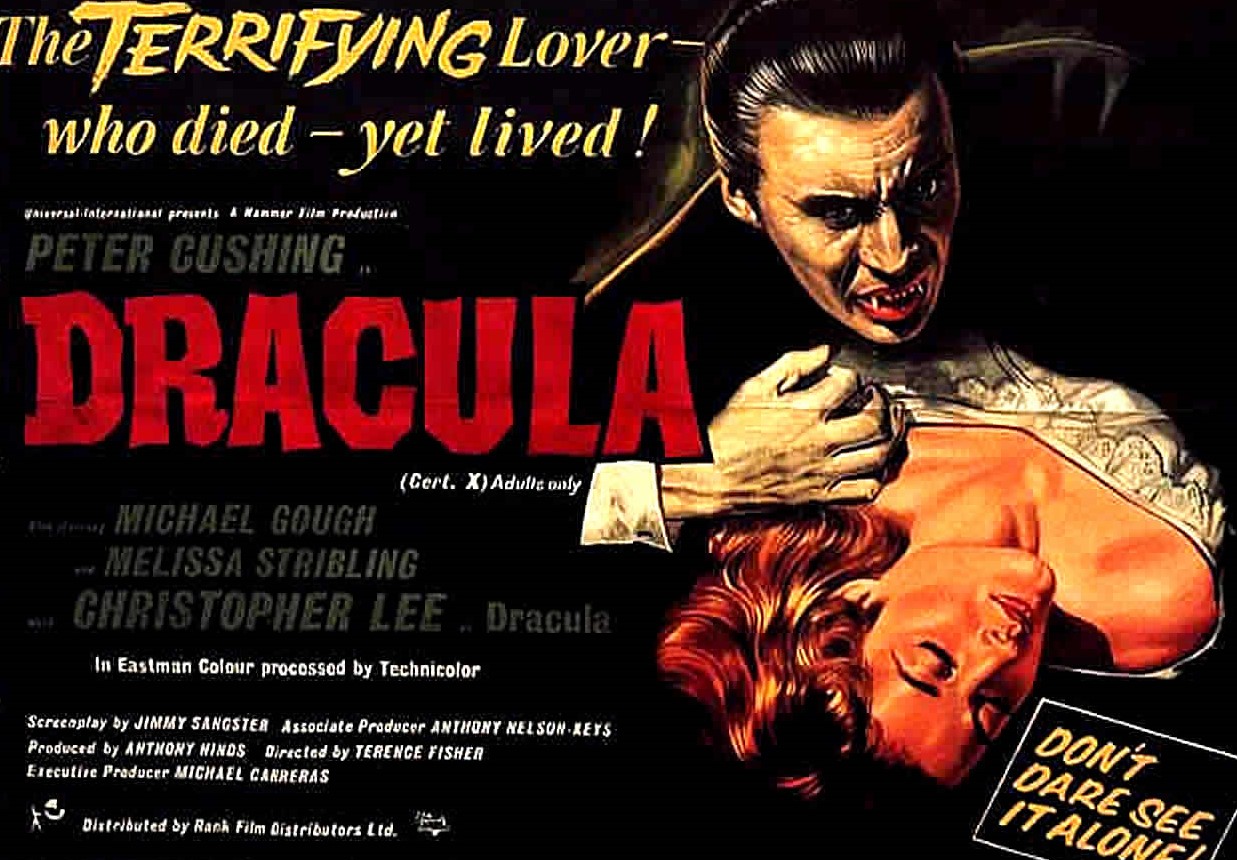 Many things I mentioned in a previous review of The Curse of Frankenstein can be applied the (Horror of) Dracula. Both films were early installments in the Hammer era of horror films, directed by Terrence Fisher, starred Christopher Lee and Peter Cushing, and were vehicles which unearthed classic monsters in new vivid color. Additionally the Hammer film’s gothic style, modest budget, and limited set locations has lead to a distinguishable feel to these films. (Horror Of) Dracula was the second film to reanimate characters that had laid long buried. Though all of the Universal monsters have near equal legacy, Dracula has always been, or at least felt, like the largest flagship.

As seen with The Curse of Frankenstein, the Dracula Hammer Film starts somewhere near the beginning of the original story and then wildly runs in a different direction, sometimes hurdling over pivotal characters or inflating minor ones. In no other film is this more apparent than Dracula, who sees Johnathan Harker, a mild mannered Easter European traveler come to stay at Count Dracula’s castle. Harker is the new resident librarian and will be staying with the count to help him with various studies. Alright, this sounds slightly different but I can see where this is going. Within the first 20 minutes, however, this mild mannered Librarian unveils his true identity as a secret vampire hunter destined to destroy Dracula. Wait, what? Alright, let’s do this. Harker’s narrative may be one of the larger changes in the current film adaptations of Dracula, but the Hammer Films also take liberates with its namesake villain. Christopher Lee, who played the gloomy monster in Curse of Frankenstein, plays an engaging Dracula, one that possesses a sobering disposition and one that could be mistaken as just another Romanian count if it were not for the whole sleeping in a coffin thing. Rather than the handsome, dreamy demeanor typified by Bela Legosi and Lon Chaney, or even the cave monster demur seen with Nosferatu’s Max Shreck, Christopher Lee plays Dracula similar to the way John Carradine portrayed him in House of Frankesntein and House of Dracula. Though those two films were a terrible device for Dracula, Carradine played the character with almost no mystic qualities aside from turning into a bat and being burned by the sun. Christopher Lee’s Dracula is similar though with more violence. From gracious host to bloodthirsty monster, Lee’s ability to portray shades of humanity then monstrosity with latent sexuality is perhaps Dracula’s strongest trait. Oh yeah…all of this is still happening within the first 20 minutes right around Harker’s early demise.

The bulk of Dracula centers around the investigation and actions of Dr. Abraham Van Helsing played by Peter Cushing who, in the film, was longtime friends with Harker. Van Helsing tracks down the now undead Harker in Dracula’s castle and disposes of him. This leads him to report the news back to Lucy, his fiance, who has taken ill and is now living with her brother, Arthur Holmwood and his wife Mina. Yeah, I know all of these characters are mixed up but whatever. Lucy has already been bitten by Dracula when we meet her as she sits, quite eerily, in bed and waits with sexual anticipation for the dashing Christopher Lee to show up on the balcony. Holmwood is at first reluctant to hear Van Helsing’s Explanation of these terrible events, but soon finds himself embroiled in an undead narrative. Also, since meeting Van Helsing, he has seen his loved ones put in both mortal and immortal danger. Oh yeah, the ending for this film has probably one of the more realistic ending to what happens when a vampire gets baked in sunlight.

Aside from the gothic and aristocratic themes that have become prevalent in Hammer Films, Dracula is also noted for just how creepy and terrifying actors look on screen. From main villain to side characters, everyone who is even slightly evil looks horrifying, which is also made worse by inventive lighting and lavish looking shots. After supposedly dying from her affliction, a dead Lucy lures Tristan, Holmwoods’ daughter into the woods at night. Dracula’s attempt to make his undead look slightly less dead is successful, as Lucy’s undead looks like a raving lunatic in white nightgown. This subplot with Tristan leads Van Helsing to the Holmwood family crypt, where Arthur Holmwood gets to watch his sister get a stake through the heart. This guy’s luck.

I only make jokes about Holmwood’s circumstances because he keeps finding people he loves keeps getting pulled into the net of Dracula. Holwood’s wife, Mina, is the next target. This is revealed after Arthur gives her a crucifix to keep her safe, only to find out she is already under his spell. Goddammit. Both Van Helsing and Holmwood try to catch Dracula by wandering outside while Mina lays in her room unattended. Dracula breaks in and steals Mina, intent on making her his new bride. After a horse chase, we find Dracula burying Mina alive(ish) outside the castle before being chased inside. Dracula finds his end via sunlight (again) after a brief and exhaustive dining room scuffle.

Horror of Dracula is not perfect. As much as I feel the setting is effective, the costumes lay somewhere split between 1940 and 1840. In fact, if it were not for Harker’s dating of his journal and the absence of automobiles, I could take this film as being from the early part of the 20th century. The Hammer films did not have the budget to make everything work but made due with what they had. This has been an occasional formula for success, due to its challenge for creative minds. Though Horror of Dracula has a fraction of the budget Ben Hur did in the same year, it made due and became one of the more effective horror films of that decade, if not only in the legacy of Dracula.