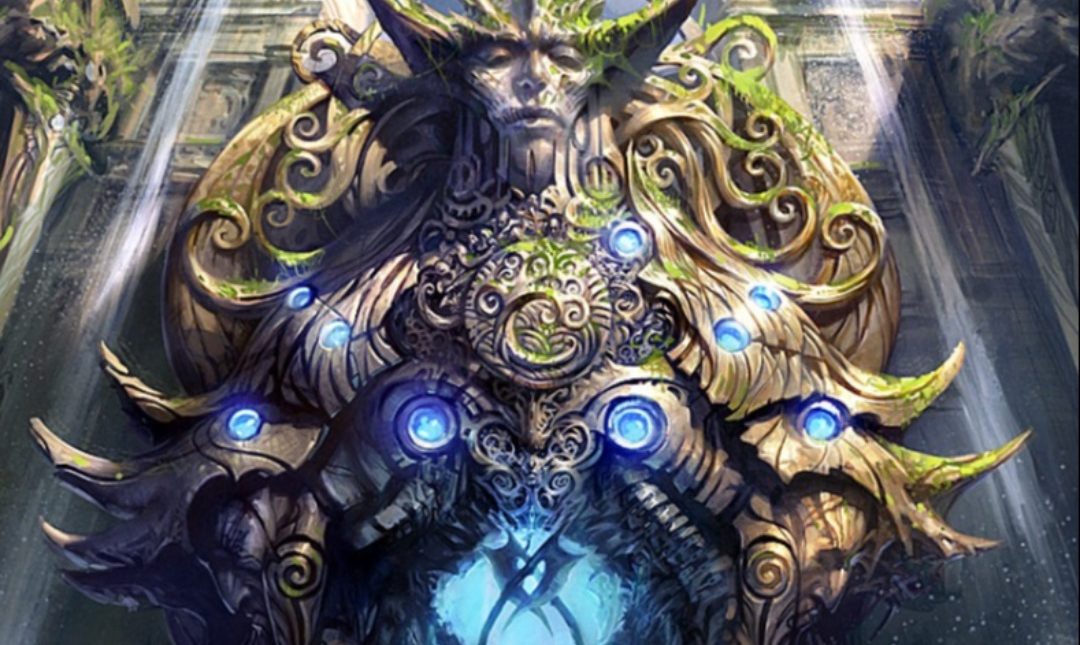 Watchtower is a monthly digest compiling interesting developments in speed, heavy, and doom albums on Bandcamp. to fit the theme of the site, these albums were chosen for their recent release and also for potential interest with people who are already adventuring in the worlds of fantasy. This month’s image comes from Magic the Gathering with an older set called Return to Ravinca. The image, illustrated by Svetlin Velinov, depicts the Simic Guildgate which is one of 10 gates to the guilds which rule over Ravinca. I could explain more but there is only so much time to discuss magic cards.

If hyou did not know it by the cover and the album title, Dragony is having a blast making music. From goofy artwork to goofy sounding music, Masters of the Multiverse seems to be aimed an audience who loves to smile throughout their heavy metal. There is nothing wrong with anthemic power metal which seems to be wielding a laser gun.

Who is ready for some guitar? Listen to that tone, it is like it is skidding out of the 1980’s full of attitude and with tons of arrest warrants in its name. For a debut record showcasing a one man project, Heavy Chains works exceedingly well in terms of production, focus, and of course boundless energy.

I do not know what is going on in this picture. I feel it tells a story on top of five other stories. Yes, I keep looking at this cover and seeing more things which draw my attention. This is funny since the music works the exact same way with a rich tapestry of interesting sounds which pull one’s attention in many direction. The result? Madness. Delight. Enigmatic immersion.

Hey. This is not metal. Oh well. Synthwave / outrun / retrosynth has always snuck in the backdoor of the metal scene as an off the books member which no one questions its validity compared to other more neighboring styles. Memphis Rains continues this tradition by fully employing the underground tape aesthetic with music that is straight out of Bladerunner. Is it deceptive? Of course. Is it good. Of course.

I think I know one of the members in this group but only through various chance meetings. I may have played an early version of my game in the parking lot of Maryland Deathfest. Regardless Smoulder is a band which is on the same trail of heavy doom pilgrims as Pagan Altar and The Obsessed. If you enjoy the slow sounds of epic doom then you are going to be able to bang your head very slowly.

Fuck yes. Old school speed metal. Who is with me! Oh just your three. Fantastic. I feel the people who get old speed metal really get old speed metal as it sometimes blurs into an ecstatic ball of frenzy. Black Viper is from Norway and love tight leather pants but instead of being a cartoon for old school metal, this band really gets to the root of the genre by producing something that works at all times as riffs and solos never really go outs of style.

Why does all speed metal fear the meltdown of radioactive material. Radux is total throwback with its sound, art style and general cry for evacuation due to speed metal meltdown. This is okay as a smile is inescapable as the riffs cascade through your frontal view as it slowly becomes 1988 again and everything is not okay.