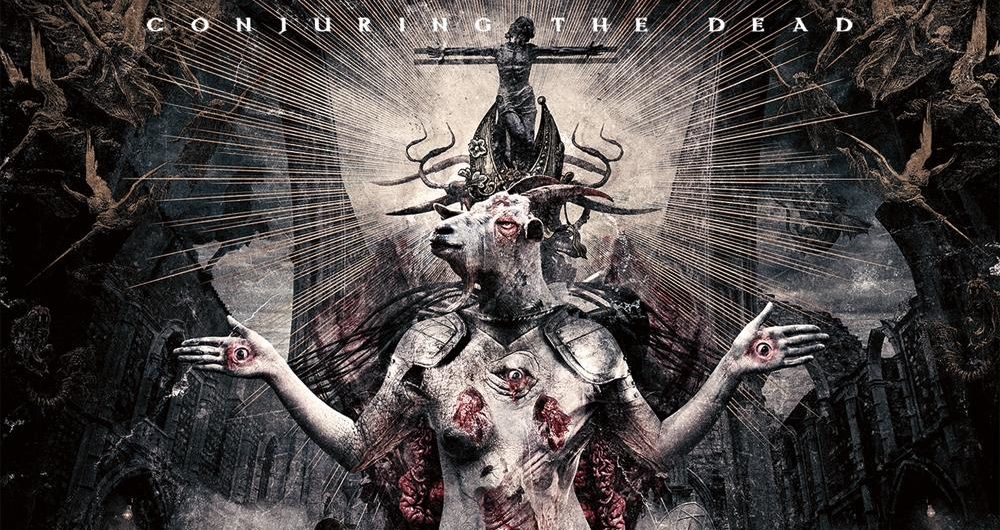 If you haven’t heard of Belphegor, here’s everything you need to know. Their name is taken from a demon who is said to be hell’s ambassador to France, of all things, and who tempted humanity with invention and wealth. Their vocalist guitarist (fucking Helmuth Lehner, so named because whenever he talks you can hear the voices of the damned) worried fans in 2011 when he contracted typhus (which, holy shit, is pretty metal in itself, not only because the only more metal illness possible is mercury poisoning, but because typhus is a disease so shitty this pestilent fucker got named after it) and this, “Conjuring the dead”, is their tenth, and blackest album to date.

Belphegor might well be one of the darkest blackened death metal bands ever forged. Musically, they exist in that strange weld-line between Black Metal and Death Metal near the metaphorical tip of the sword that is metal, and it’s not hard to see why; Black Metal is defined by a fascination with corpse paint and summoning demons, and death metal is fascinated with mutilating corpses and pleasing demons.

Seven hells, this sounds like an abusive relationship between a necromancer and his favourite meat puppet.

I only mention this because, for the last 23 years, Belphegor have been slowly perfecting the exact sound you’re hopefully thinking of with that description roiling in your mind. In fact, I’ll bet that one of the biggest worries fans have had over this one is that they’ve become a little predictable in their relentless punishing blackened metal. It’s all good, sure, but it’s felt like they’ve been reaching the limits of their comfort zones in albums past.

As i said earlier, this is their blackest. If you’re already a fan, the first song on the album “Gasmask Terror” is pretty much indistinguishable from the fare on their last few albums. Good, old and thoroughly vicious back/death metal.

It seems that, like their demonic namesake before them, Belphegor have seen the temptation of invention. Throughout this album they take routes I wouldn’t expect, striking out from their well-mastered comfort zone to experiment with some more melodic and epic stuff. There’s a much greater focus on atmosphere, and an almost schizophrenic sampling of new styles as the album professes. I mean, while stuff like “Bondage Goat Zombie” has its place, and god knows there’s plenty of space for so-black-it’s-funny in the halls of metal, this is a nice, meaty and more serious album that sees some slower, different song writing in evidence. the musicianship is as fantastic as we’ve come to expect, and their songwriting’s This said, it’s an experiment and it won’t be to everyone’s tastes. That’s the risk, but I think it pulls off. This is by far their most interesting album in a few good years, and it’s this kind of creativity, backed with the talent everyone knew this band could deliver on, that makes this one of their best.