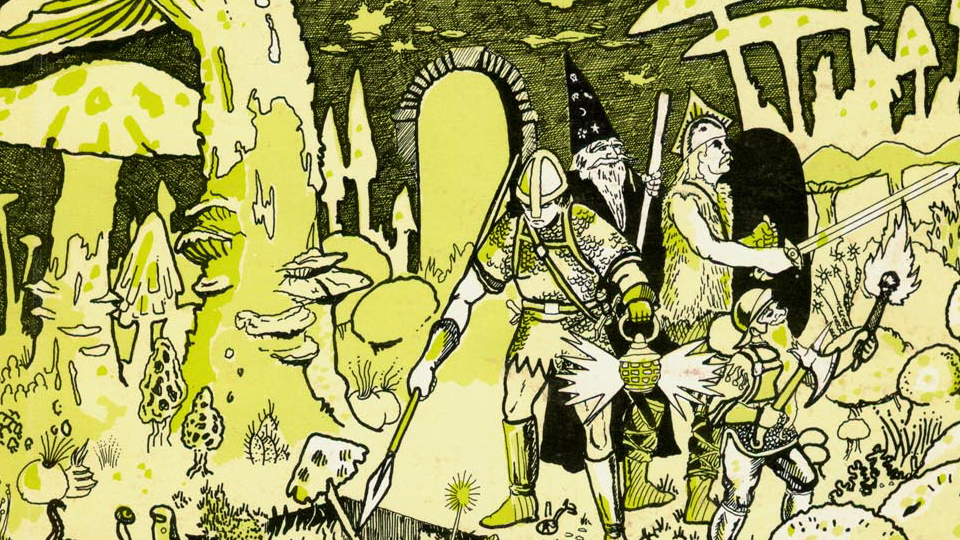 BASIC DS. Life on the Frontier

I have been trying to come up with a name for this type of dungeon synth. Over the past couple of months and year I have seen a style of DS that leans towards the raw, lo-fi unrefined, and potentially crude. This primitive style is usually adorned with very simplistic album covers even looking like poorly drawn monsters out of RPG bestiaries. In fact the aesthetic for many of these records are geared towards old D&D dungeon crawls where the theme of fantasy RPGs is blunt and self aware. This BASIC DS style is much like the musical version of OSR clones where they mimic the aesthetics, grind, and general misery of old school RPGs. While DS has always had a love for fantasy and imagination, this basic variety reminds its listeners of the reason why most of us came here in the first place. The result is a dive into a world where things are simple and despite the rough edges which make up the picture, there is a sense of wonder which, for some including myself, is a relief from the complications of regular DS.

The Herbalists is one of the better examples of using basic sounds to create something entirely charming. Caught somewhere between outdated synth sounds and the soundtracks to CRPGs, An Unexpected Forest Shrine utilizes melodious structures to create something that sounds like a Saturday afternoon and early evening spend inside absorbed by a computer game. As of press time, this project has just released a second album (?) which is just as enchanting as the first.

This is the second Owlbear release which follows the quest begun in the first. The quest for Owlbear seems to be celebrating old monsters in D&D books as well as illustrating a short story in simple and warped melodies. The funny thing about both of these releases is the fact the players (or listeners) die in the second half of the cassette without any chance to escape. If this is the case then Owlbear is going for a weird niche of TPK DS.

The concept of lo-fi exists in the world of BASIC DS to the point where crude aesthetics reign supreme. Bitter Old Wizard is just that, the musical manifestation of a wizard with things like “dust covered spellbook” are less song titles and more descriptions of a character. Demo I is the beginning a journey for this artist who creates a sonic landscape of magic and dirt with with a sound that is rain drenched, beleaguered, and in possession of a secret.

This is very rough. In fact, it may not even be fully done. One of the things I enjoy about Yag the Accursed is the fact it is out of tune, broken, and near the point of being without fidelity. Much like noise and perhaps other edges of experimentation rests a point where normals aesthetics must be unshouldered and left on the ground. Good, bad, terrible, interesting, and unlistenable all exist in a world where those things are not anchored to things one has come to expect. Yag the Accursed is less of a new era in aesthetics and more a rough demo which I am finding myself oddly attached.

I would like to make clear not only my enjoyment for this lo-fi bedroom BASIC DS but also the possibility that I may not like everything made in the style. There were other records that were made very similar to the above that did not capture the same attention. I believe this is normal for any growing style of music as things you may have enjoyed as a whole becomes large enough where one begins having the luxury of being discerning. The rest of the Digest will continue with contemporary DS ranging in sounds from the magical to the very dark. -Kaptain Carbon

Torchlight is from Italy and this Bandcamp page is actually the rerelease of a February 2018 release just now with physical release and slightly better layout in terms of design. Torchlight, in the musical sense is traditional in its quest to play music that is not only slow and mournful but also exuding a sense of wonder. this is the second release by Gondolin Records which continues the label’s aesthetic of woodcut image on a colored back for the tape design. If they keep this up, both musically and visually it is going to be a fantastic series.

Vintr is from Arizona and does not move at the same speed as other DS artists. The last few releases came in 2017 right around the same time and since then — nothing. I remember enjoying both I and II when released and am excited to travel back into the world created by this very quiet artist. Both whimsical and mystic, Vintir’s Drottning archives all of the things I enjoy about DS including a sense of arcane contemplation as well as track titles which open the world for interpretation.

John Bauer was an illustrator born in Jonkoping, Sweden, in 1882. He drew many pictures of folktales which have both a surreal and magical. This is perhaps why his work has been adopted by so many DS artists for covers. I find it fascinating that a relatively obscure fantasy artist (From a US perspective) lives in the work of an internet musical style. I can also not think of a more appropriate musical artist to take up the mantle of this illustrator as Vid Ett Berg Uti En Dal has the right amount of harsh melodies and uncanny magic to bring these illustrations to life.