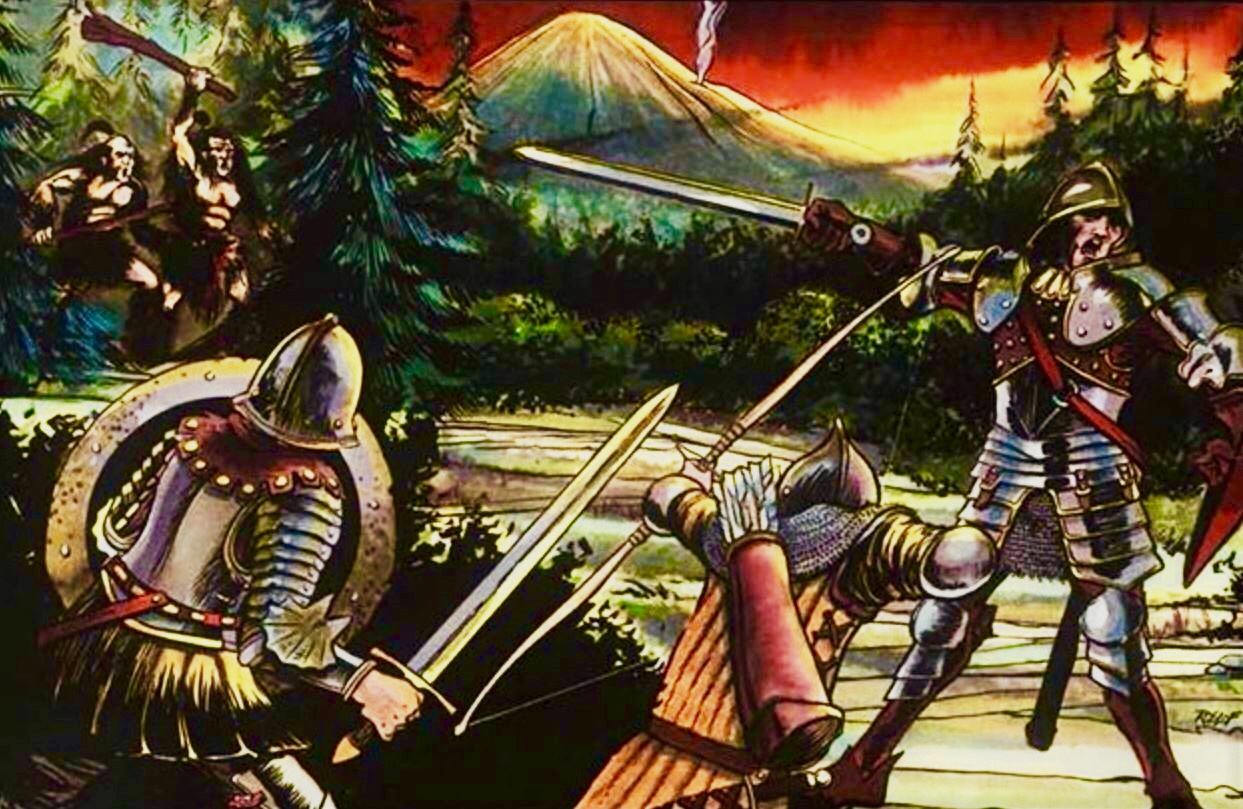 Perched along the banks of the mighty River Shrill, this isolated frontier settlement is the last stop on the caravan routes. The mile-wide river is all that separates the Fort from the shadowy bulk known only as “The Hill,” a land of nameless terrors and ancient legend. The fog-shrouded crests and densely wooded slopes of The Hill rise 400 feet, looming ominously over the tiny settlement. On clear days, The Hill’s rocky cliffs can be seen jutting from its bulky mass, but the view is usually obscured by gouts of steam that seem to rise from outlets on The Hill itself.

This mysterious mountain has long been rumored to shelter bands of vicious monsters. Only the awesome waters of the Shrill have prevented the monsters from invading the undergarrisoned fort. Several groups of brave and hardy adventurers have crossed the river to explore The Hill’s summits and face the
wicked monsters, but none of these bands was ever heard from again. Now a new group of eager adventurers has met in one of the inns at Guido’s Fort. It is here that the adventurers discuss their own daring plans to explore the dangerous mountain.

The rumors have never been proven false. No one else has ever returned. The characters’ boat is waiting. The Hill is one of horror, to be sure. But for the strong and daring, it is a Hill of just rewards for deeds well done. The new adventurers are ready and willing to take their chances. So let the adventure begin!

We begin the digest with the second record from Darken Wood which is a US based project which leans heavily on atmospheric synth. The result is a magical journey into realms which feel halfway between bedroom dungeon synth and 80’s fantasy soundtracks. I already enjoyed the debut from this project back in September and with the second release, Darken Wood has surprisingly placed moved towards a favorite with its continual narrative into an ethereal kingdom.

If you were ever to give an album a chance to breathe and get started , it would be this one from Deorc Weg. It isn’t until a few minutes into the glacial atmosphere of Hollow Catacombs in which the song starts to take shape. One realizes then that this release is dungeon synth just on a different timeline and meant for listeners who are going to live forever.

I have spoken at length about my love for demos especially in the dungeon synth scene as landscapes for potential and experimentation. Morgarath exhibits vast potential with a bedroom produced demo which is both comepetant and still charming in its rough edges. From the soundclips to the heavy piano, this is a release which is both emotional and successful.

Snarling Clearing and Inorian have been names known to me due to their participation on the dungeon synth compilation series. Of Yestern Snows sees both artists presenting moody atmospheric dungeon synth which not only compliments each other but creates one of the better splits of the year. From the minimal and driving synth sounds of Snarling Clearing to the hazy and nostalgic sounds of Inoriand, Of Yestern Snows creates a soundscape which his both vivid in its descriptions and entrancing in its design.

This maybe the closest Moonworshipper has gotten to the top of the digest as these releases usually dwell in the basements of whatever article they are included. Ossa Coronata has been known due to the diligent participation on the Dungeon Synth compilation. Tis the season for some hellishly haunting music which is both hypnotic and wildly entertaining.

I love this scene. I got an email about this project a few days before its release. It was shrouded in fun and goofy horror motifs with an air of good natured mystery. Due to my idiocy, I was expecting it on another label and missed the chance to get the few tape copies before it sold out. If one sleeps on the Pumpkin Witch, one misses candy. For anyone confused this is a project with three guessable musicians in the dungeon synth scene doing a one off album full of lo fi dark synth. It is both fascinating, limited, and as fun as a plastic bowl of candy.

Both Isegrimm and Argonath seem to be destined for each other at least in terms of collaborations. Foreign Fantasy sees both artists, who have spent a good potion of 2017 in devotion to folk and fairy tales, presenting recreations of more well known and obscure narratives. Sleeping Beauty comes to us from Isegrimm while Argoanth strikes the same anvil with the Irish legend of Diarmuid and Grainne. Both sides are filled with beauty and mastery deserving of attention.

And we are back with the more Dungeons and Catacombs. This time is because of a far out split by two artists who are entirely new to me. With a little sleuthing, both artists, as well as some participants on the dungeons and catacombs series comes directly from Solemnis Distro which is a Chilean collective of ritual / noise / drone / dark electronics. The Pleiades/Astral Transcendence split strays on the dungeon synth side but courts the favor of the odd and mystic in a release which is going to appeal to a certain audience who love it weird.

Listen, I understand that this release is probably just meeting the minimum bar of effort. With a half completed Bandcamp page, album art that is just a picture and text promising more music in the future, Kolob seems like an unfinished thought which needs desperate attention. With all of that said, the three songs on this utilitarian titled release are not only fantastic but are entrancing. I actually don’t want anything else rather just an entire album of slow resonating ambient.

All aboard the weird train! As with most endings of the dungeon synth digest, we get into the odd and the strange. Black Blight may seem like a dark ambient / noise project from the cover but it is much much stranger. Formed through the work of three people and one composer, Towering Black Spires seems to be the concerted combination of spiritual mysticism, bedroom production, and cosmic drone written and composed under the influence of psychedelics. Black Blight is the sound of a trip going bad but accepting the experience as a journey.

Well hello Eldest Gate Records. Compared to some of the other music on this label, Beorn’s The Road Goes Ever on stays on the path of normal with minimal and atmospheric synth devoted to Tolkien’s Middle Earth. See. Normal. It even has some dungeon synth covers of Burzum songs. Jut ignore the fact that it is fraying at the edge of sanity with songs like “Land of Gorgoroth.”

{Editor’s Note: The originally linked media content for Nerzalic Catacombs has been removed and replacement media was not found. Apologies]

Once one travels far enough down through catacombs and forgotten passages, the sound of droning organ can be heard forever humming through eternity. Nerzalic Catacombs is a Ukranian artist which puts their soul and spirit on the line with an album of annihilation through drone. If one was looking for dungeon crawling music which was slightly maddening, this is a perfect place to start.

I really do not know why I enjoy this so much. Perhaps it is the charm of fun and dorky music run through production which sounds like soundtrack for a CRPG. With the second release by Hobbit, it appears this project is going to run the gamut of Tolkien based narratives which is both painfully normal in this music style but incredibly charming. This is pure escapism as it is the type of music which offers deep immersion but in a style one wouldn’t normally think to run out and share with the world. T the end of my life, it will be just me and Hobbit by ourselves in some Elven forest.

What gets the bottom bracket in the digest? Is it noise? Is it bagpipe music? Its, well, an album that sounds pretty normal in terms of dungeon synth. Trollkraft’s is multiclassing in dungeon synth with levels in electronic, bitpop, and ambient music which is far away from the dungeons. Mot Höjden is an incredibly uplifting album and one people maybe into given the courage to see what that blue light is at the bottom of the cavern.