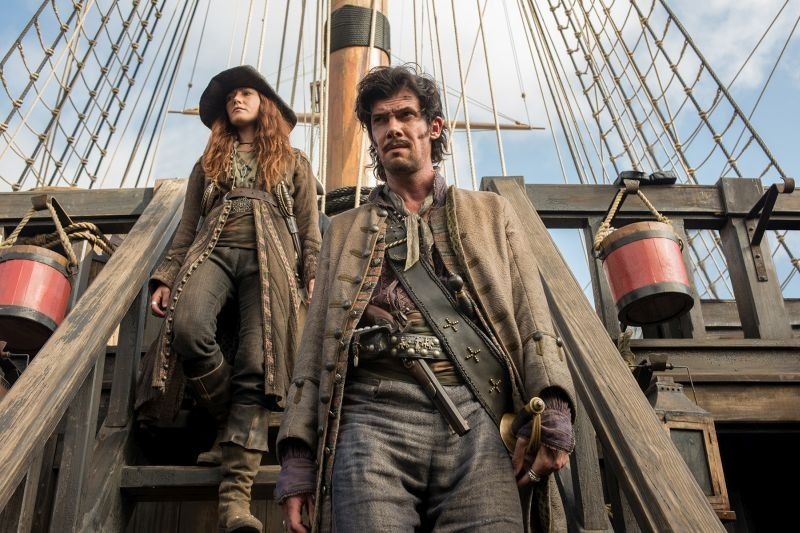 Our editor Brendan is really into Black Sails. In fact he has fallen so in love with this show he reviewed Treasure Island as sort of celebration and also extended interest. I hope this does not put any pressure on me. One could say our tiny little office is now covered in various piratical paraphernalia including flintlocks, tattered flags, and some sort of awful combination of rum and juice water. If that does not show dedication, I do not know what does. Brendan’s enthusiasm for the show has sort of revitalized my interest in it as well. It is difficult not to applaud the Starz series for its immersive qualities, as Black Sails is moving slowly towards being one the most violent prequels to a kids book ever made.

Let us recap what is exactly happening at Nassau and abroad shall we? Guthrie and Rogers are looking for the extra gold stolen by Jack Rackam and Anne Bonnie, while simultaneously heating up their own gross romance. Rackham, before leaving decided it would be a good idea to clear his and Bonnie’s name first so he is now traveling back. I am sure nothing bad will happen. Nope, he is just going to pop into town and then be off for new horizons. Out at sea, Flint and his crew decided to team up with the island of freed slaves to go back to Nassau and fight in some big season ending finale. I am not there yet so I could be wrong. This newly formed friendship between Flint and the slaves leads to a detour to Teach’s (hipster Blackbeard) private cabana where somewhere and somehow it is concluded these two must have a duel. The actual duel turns out to be a pretty decent bout of action despite the whole affair being forced and ham-handed.

One of my biggest complaints about Black Sails is the inability of characters to get out of their mold and do something else. This includes when a character lapses out of sensible judgment. Vane was following around Teach for a little bit, bound for other places that do not involve Nassau. Here was a character ready for a side adventure on the high seas. Him and Blackbeard together at last. Unsurprisingly, he steps in and helps Flint during his duel thus severing ties with Teach. Come on dude, just go somewhere else. Now with that established, we have Flint and Vane, old pals, taking on the might of empires. Ugh. So back in Nassau. Oh look at that, Rackam is in jail. What a fucking surprise. Idiot. While Max is trying to keep her power during the regime change, Rackam decides that he will keep the stolen gold so Rogers then has to face the ire of Spain. His plan is to never give up the gold and then watch Nassau be burned to the ground when the fleet comes and destroys everything. I am guessing there is a good plan set in motion that he won’t be killed in the process.

So let us clear something up. This whole thing went from finding a goddamn gold ship to finding a small trove of gems that is just part of the treasure. This chest of treasure is a fraction of the money but Spain seems to be frothing at the mouth at getting this back. Spain also seems to be unconcerned that the amount of resources spent in acquiring this small part of the treasure appears to be actually more costly than the treasure itself. Whatever. Rackam puts himself in the role of hostage during the middle part of the season while Bonnie, Flint, and Vane all plan to break him out for various reasons. During my marathon of watching I tried really hard, but ultimately failed, to give a shit about Guthrie and Rogers romance, which seems to be peppered with as much gratuitous lesbian scenes as is possible to fit in an episode. Even more gratuitous however, is the notion that this money is so important that it causes nations to chase after every scrap and turn neutral characters like Rogers to slightly evil, do-it-at-all-costs villains, burning every bridge and contact he can go through to get every penny back.

So we have had the bad now what about the good? This whole season seemed to be gearing up to the breakout of Rackam. Even though the scene was short and the three main characters were wearing ridiculous head scarves, the whole thing was shot in one take with an aerial camera, which was exciting. This is what the show really excels at — headstrong action sequences with a lot of dramatic fluff paving its way. The end result of this whole breakout however saw Vane captured by the English and the gems in the Pirate’s possession. This whole notion is not something Flint wants to see and the whole season sort of mirrors Season 2, where Vane breaks Flint out. Now it’s payback time. Right? Whatever. This whole season would not have happened if Rackam just kept walking. This whole middle part could be called “what Jack should not fucking have done.”

The end of the season sees Guthrie and Vane still pissed at each other. I guess this was becasue of the whole father death thing but I could be wrong. After Rogers falls ill to the creeping sickness which dotted the season, Guthrie takes charge and orders a speedy trial and execution for Vane. Flint, Silver, and Billy Bones all try to make rescue attempt to save, for come reason, this character. There is a chance that Vane could be rescued before his death but the character makes a last effort for redemption where he stirs rebellion and goes calmly to his death. This is, on the surface, suprising but after Teach is informed of Vane’s death, anyone who has watched this show can guess what is coming next.

I left the last episode for one more article as to process the season as a whole. I feel this is important because three seasons of Black Sails has left me questioning what I desire from a show. The middle part of season 3 seemed to be bogged down with characters scrambling together before some big finale. My predictions for the end of the season is a declaration, but not completion, of war. I am far gone hoping for inventive television with Black Sails and only hope for entertainment. Nearing the end of season 3 I can say I was partially moved but am still stuck in this quagmire of confusion. Do not tell Brendan as I do not think him or his pet parrot can take the shock that I am not 100% on board with this show. Perhaps I just need a few more seasons to get my sea legs.