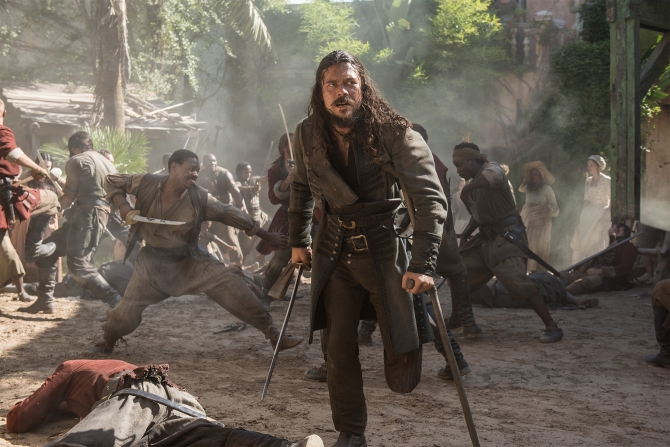 Oh shit. What the fuck happened last season on Black Sails. Oh that’s right, fucking everything. If you were not aware of my long and strange relationship with Starz original programming Black Sails, you can read a dozen articles or me going through conflicting emotions regarding pirate themed political drama. In the shadow of larger shows like Game of Thrones, Black Sails offers the off brand variety for fantasy drama that is filled with violence, sex, deception, intrigue from an ensemble cast that weave multiple storylines like a goddamn maypole. Starting from an interesting historical framework and swashbuckling their way to insanity, Black Sails remains a show that is marked for its ability to be entertaining, boring, exciting and dull all at the same time. This marks the final season for a show that I need a few more decades to progress but seriously please answer my question. What the fuck happened last season on Black Sails?

Oh thats right, GOLD! Yes, the linchpin in the story for Black Sails seems to revolve around the last remaining gold chest that was apart of the larger gold already given back to Spain. The British Empire seems to be dead set on scorching the ever living fuck out of the pirate colony Nassau for one chest of gold that is probably worth the amount it costs to send these scorching ships out. This chest of gold is passed back and forth like a football with the main rivalry now between the Team pirates lead by Flint and the Empire lead by Woods Rogers. Whatever the case, important people are dead including Charles Vance and others like Elizabeth Guthrie is a turncoat to the piratical cause. Everyone else is in between with a rebellion towards England and I am dead certain i will see gratuitous nudity inf not in the first episode but in the first three. Like the previous three seasons, there are moments of dull drudgery segmented by exciting action. The season opens with a particularly interesting naval battle off the coast of Nassau with Flints men moored in site of the damn fort occupied by British soldiers firing cannons. Again, the strength of the show rests in its set and costume design as the pieces feel real and natural. Even with CGI, the enormity of these ships as they do battle is enough for note and praise. The mixing and effects of sound add to the drama of action as one of the main draws for shows. This continues throughout the opener when the last surviving boat out of the harbor disaster is chased down and boarded,. This is why I watch this show. Fucking pirate fighting. This is why I also criticize the show when the pirate fighting is done.

So just to catch, Long John Silver escaped death in the harbor and was washed ashore to some madman rogue pirate Isreal Hands who is keeping him to sell to the empire. Back at Nassau, Roger’s men are processing a bunch of pirates for execution and taking their damn time to allow for a dramatic rescue because that is seriously what is going to happen. Deeper within Nassau, Guthrie (now married to Rogers) has a rich grandfather that could help with the growing debt of this whole operation. Max the neutral is still trying to keep control over a scurry of people vying for political control with Nassau. Teach (Blackbeard) and Jack Rackahm hold a bunch of British soldiers hostage in request of Guthrie being turned over for responsibility for Vanes death. If this feels like a bunch of storylines being thrown into churning waters, well, welcome aboard to Black Sails.

The first third of the season continues along just as the previous seasons and even the opening sequence — exciting action marked by plodding storylines and a desire to have as much deception and unrest as possibleuntil the whole thing feels like a fucking mess. Silver and Hands eventually meet up with Max under the cover of night to work out a deal but then it turns to violence. Billy Bones, the quartermaster and Flint overtake a colonial estate only to have their band fighting with each other. Teach and Rackahm have been captured and are being tortured on a boat by Rogers. The new bad guy captain what’s his name is terrorizing the town with a iron like fist. I am not even going to mention his name because it really doesn’t matter since he is going to be gone soon. There seems to be no end to the twists and turns that this show takes despite the fact the most surprising aspect if if thing did not change so rapidly. Imagine that, a show where you could possibly catch your breathe before things change.

Perhaps the more troubling pace of Black Sails and something I have talked about for the past three seasons, is not that things change, is that it changes and reverts back to an original state before changing again. By the close of the third episode Bones and Flint are aligned again, Captain Soon to be Dead is dead and the pirates have taken over Nassau. Oh goddamn. I am assuming that by the next episode things will be different and they will never leave this godforsaken island which we have be3en marooned on for the last 3.3 seasons. Black Sails is advertising this whole thing as the final season which thank Christ for small wonders as I am starting to get seasick with all of this rocking.