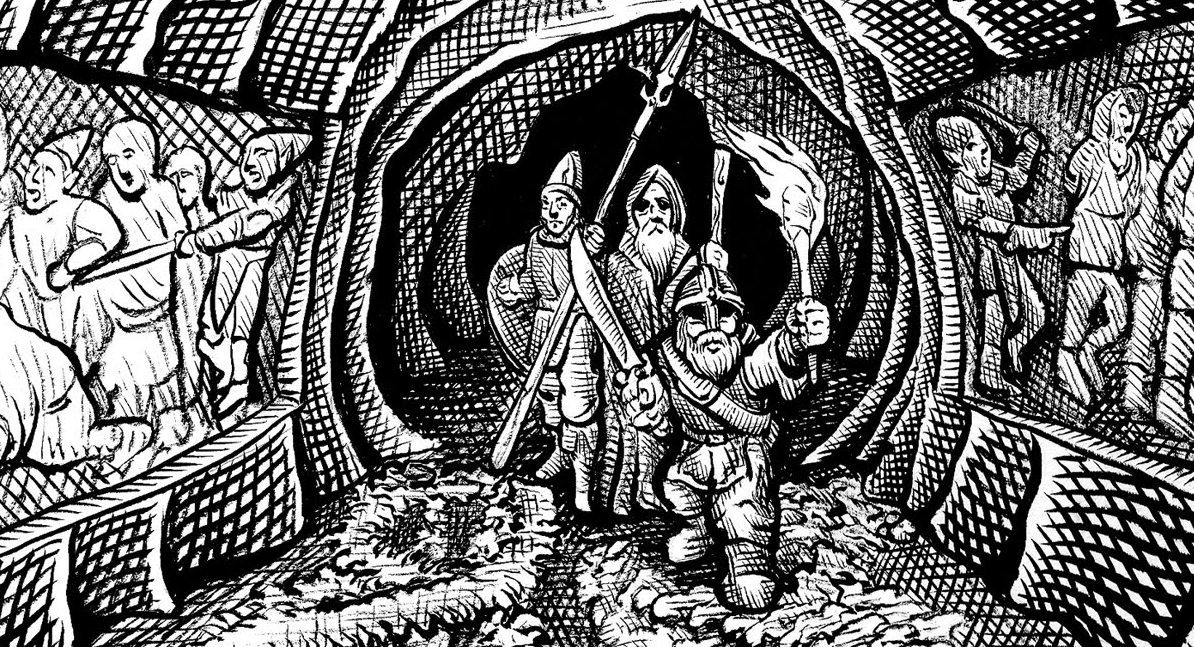 One of the struggles with an interest in old styles of gaming is finding people to actually sit down and play the game with you. I made mention of my previous RPG excursions into Labyrinth Lord and D&D Basic. Most of the sessions for these games never went past a few meetings as they were intended to just introduce the game to my friends. Also it was hard to sell the concept of a megadungeon and a leveling system that started at 1500 xp. This was saddening since one of the main things that are common with most people interested in RPGs is an unreasonable collection of games and not enough time to play them or people to play them with. This is why I was delighted when I actually got the opportunity to play a game by perhaps the slowest means possible.

The Dungeon Synth forum is an offshoot of the main dungeon synth Facebook thread. This is a place that was created to foster the same community as the page just without the bloat and chaff of Facebook. At the moment there are 53 members as oppose to the around 1500 on the Facebook group. Hold on, I am not done. Out of these 53 members who came to another forum to talk about dungeon synth, there was an even smaller amount who started to discuss RPGs. The few that went to the smallest corner of the internet hatched an idea to start a play by post RPG game using the built in Dice Roller. I believe I was already on board even before the idea was said out loud.

Play by Post is a nebulous term for a variety of different roleplaying styles. Physical mail, message board, or any other text service is one of the commonalities which ties each of them together along with the idea that the game is run by another human rather than a computer as in the case of things like a MUD (MultiUser Dungeon/Domain). The idea of play by post predates the modern conception of RPGs with chess and wargaming play by mail established since the 1960’s. The nature of play by post, be it physical mail, email, or message board has similarities in tempo being they are glacial in their pace. While the idea of play by post has been rivaled by online RPG aids like Roll20 there still exists an archaic charm of posting and then waiting a day or two for a response.

Swords and Wizardry is one of the many retroclones of the original Dungeons and Dragons game. Because of the Open Gaming License which has been a cornerstone of D&D intellectual property, dozens of systems have taken the rules and mechanics of the game and made their own clones, hacks, and amendments. Many of these rules exist as cheap, and sometimes, better alternatives, to reading through the original Dungeons and Dragons books. At this moment, Swords and Wizardry has three different variations with their Whitebox rules (1974), the Core Rules (supplement with a thief) as well as Complete Rules (More depth similar to Advanced Dungeons and Dragons). All of them, with minor alterations, attempts to recreate the open ended and deadly nature of original D&D. Low powered characters, frequent death, simple math, and avery large chunk of the game open to interpretation and house rules.

Swords and Wizardry became the choice for Play by Post game due to many reasons. There was a simple online character generator that could give you a random character in seconds. Though the Core rules gave a player much more options and strengths if they decided to spend 10 minutes making their character, the Whitebox character generator is an interesting tool for people who have not played RPGs at all. This generator allows players to drop in and die by monster surprise without much fuss in rolling a new character. Additionally, the idea of dungeon crawling is favorable for play by post due to its exploratory nature. Things that maybe annoying to keep track of like mapping, torchlight, and slow exploration is smoother with frequent maps and text updates. Perhaps one of the largest strengths of play by post is the ability for the Game master to go deep with description and visual aids as sometimes in real life your ambience gets trampled by other chatter and table noise.

Play by post has its obvious drawbacks including idle players and just the slow nature of the game. There is little time for explosive moments and fast rewards when your magic user needs 2500 xp to level and treasure gives you 1 per gold piece you find in the dungeon with very little xp for killing difficult monsters. Additionally, Swords and Wizardry lies on the deadly side which encourages its players to run away a lot and not fight the monsters that are inhabiting the dungeon. Because of its idiosyncratic nature, Play by Post in with an Old School System attaches a certain type of person who enjoys the archaic nature of play and the classic aesthetics. I say all of this now right before potentially killing everyone with giant bees.

Perhaps one of the greatest aspects of this system is the ability to play with people you would never have the opportunity to in real life. At the moment there are two dungeon synth musicians that are players in my group which is something I always joked about in interviews. Other people are various fans of dungeon synth and interested parties from reddit who came over to see what we were doing in the dark basements of the internet. One of my dreams is to use this initial system as a proving ground for classic dungeons like the Tomb of Horrors or Temple of Elemental Evil. My dream is to run through some of my favorite musicians through a gauntlet of death and dismemberment. Maybe one day I can virtually kill all of my idols.