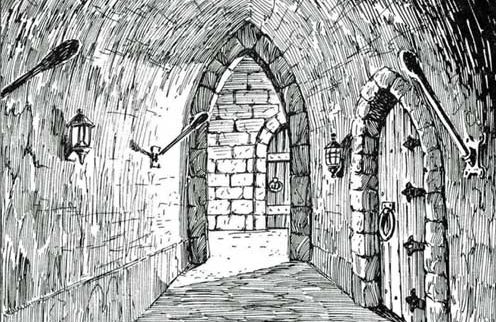 This is the first section of what could hopefully become a lifetime series, Dungeon synth is a dark ambient sub-genre of black metal in which solo artists make synth-laden fantasy landscapes, offering deep escapism to both the listener and creator. It is a style of music that I only recently found and has since enveloped my entire existence. A month ago I reviewed first issue of the Masmorra Dungeon Synth zine. Since then, other artists playing the same type of music have contacted this site asking for reviews. It would be silly to shut this heavy wooden door on this growing genre. I am going to take up this walking stick and make my way through the wild, wandering hills of dungeon synth. Some of the roads may be treacherous, while others a pleasant walk through sleepy fields. I may never come back.

Forgotten Pathways is a German dungeon synth project that stands out in comparison to its contemporaries. While the majority of dungeon synth artists have a lo fi haze floating through their production, A Long Way Home, the debut from Forgotten Pathways, shines with deep, full sounding atmosphere. While this aspect takes away some of the charm of dungeon synth, the ability to transport the listener into a space is still present. Entirely concerned with folklore and fairytales, A Long Way Home quickly becomes one of the more accessible releases I have seen to date and could possibly allow an interesting entry point for newcomers into the genre. Full of life and shrouded in magic, Forgotten Pathways is certainly ready for people to enjoy chasing after fairies by moonlight.

Magical Forest Tales is a video game. At least, that is what I think it is. This Ukrainian project and subsequent album seems to be the soundtrack to a video game that is either in development or already done. The soundtrack/album was released in honor of the game, attempting to bring listeners to their moss ridden caves of mystery. The soundtrack is undoubtedly a part of the same dungeon synth genre. The woozy synth and slow plodding atmosphere of a bare piano is an interesting addition to a sound that is usually hidden behind a veil of effects. I am sort of upset this sound is attached to a video game as I would not mind an entire 40 minute release of this. If you ever wanted to know what eating cave mushrooms felt like, look no further.

Forgotten Kingdoms is an Australian project with what I assume is one demo limited to 50 cassettes. It is difficult tracking down some of these projects save for bandcamp and sometimes a facebook page. The only reason why I continually chase down these artists who hide in obscurity is because this short 15 minute demo has is so interesting, including the banshee like vocals populating the end of “Untrodden Paths Forever Winding.” In fact, Forgotten Kingdoms peppers rasped words throughout this demo, which leads to a very personal and surprisingly chilling release. Forgotten Kingdoms is the darkest release discussed in this digest but the music, while haunted, still retains a sense of magic and light.