Weird Stories: The Life and Work of Hannes Bok 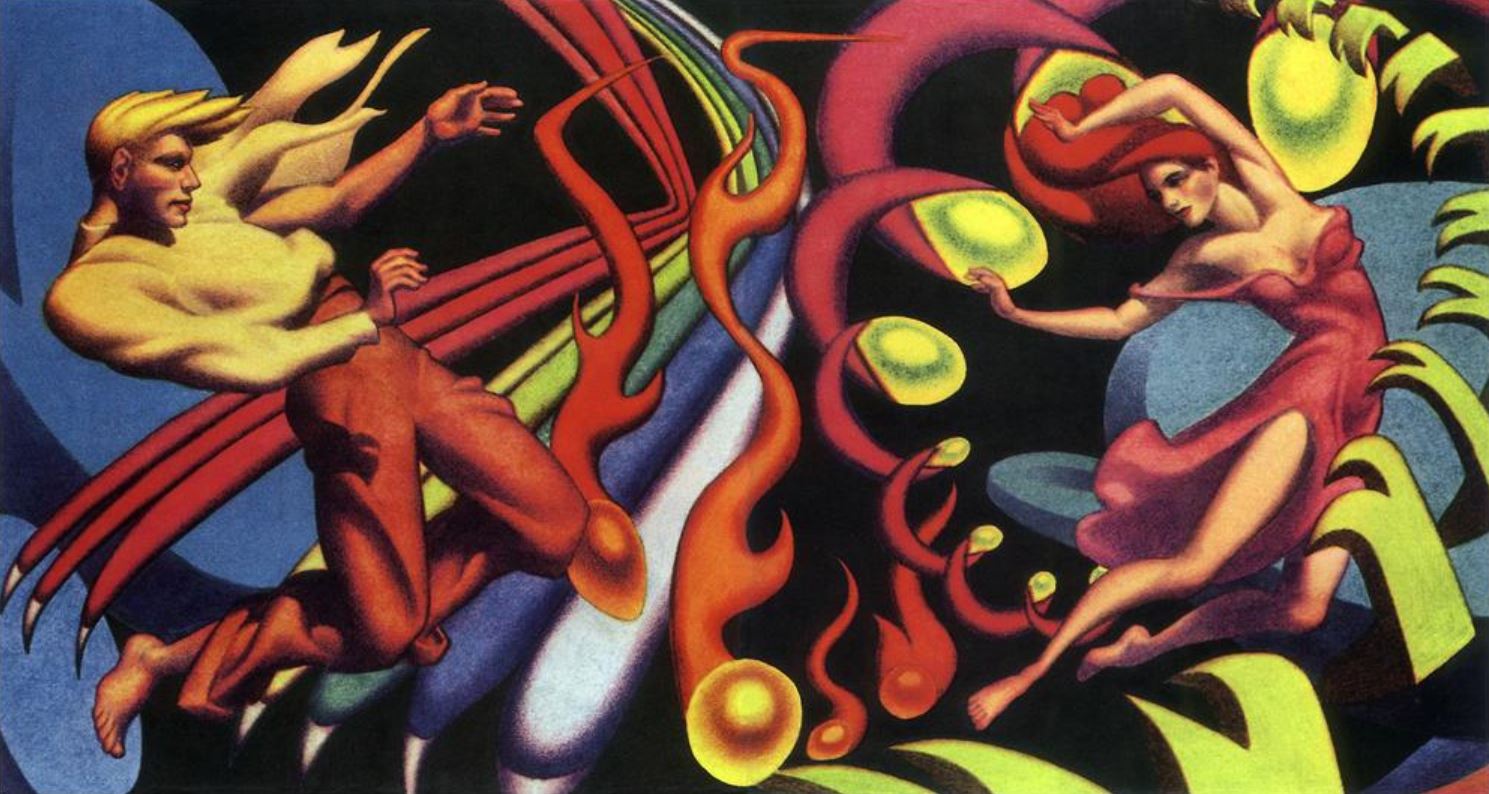 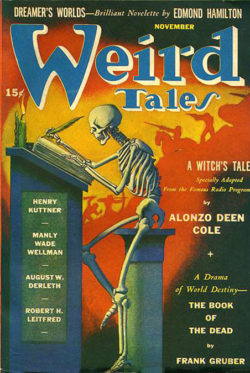 Stumbling on Hannes Bok was much like anyone other random run in with a fantasy artist. It began with searching through names of artists I did not recognize and then looking at their work and immediately falling in love with everything they did. Most fantasy artists I find fall into the contemporary era of 70’s to the present as the time period fits into the idea of what we think of fantasy. Finding fantastical art done pre 1950’s is rare and it usually belongs to the realm of illustration. One of the largest hubs for fantastical art pre-1950 has been found in the rough pages of pulp magazines. If you have ever met me personally or follow any social media of mine, it is usually devoted to the worship of pulp fiction. This is where I found Hannes Bok immediately falling in love with everything he did.

Pulp magazines, to be somewhat brief, were non glossy magazines devoted to cheap production costs and even cheaper subject matter. The name came from the wood pulp used to make the unrefined paper which gave it a distinctive tan color. The fiction and illustrations were based around themes such as western, horror, crime, sex, war, sports, and other interest groups. This style of genre fiction allowed the subject matter to fall back on tropes which in turn became a formulaic vessel of escapism. These pulp magazines, for their status as pop entertainment, were the beginning points of many famous writers including H.P Lovecraft, William S. Burroughs, Philip K. Dick, and of course Mark Twain. The golden years of pulp fiction was around the 20’s through 30’s with its decline coinciding with the beginning of World War II. It In terms of pulp art, Hannes Bok came late and did most of his covers in the 1950’s compared to most of the artists and covers discussed who did their work in the 30’s and 40’s. In the larger world of pulp art and artists, Bok was an obscure entry. With all of that said, his work is as strange as his role in history and highlights the course of many talented artists to wander off into obscurity.

Perhaps the strangest facts about Hannes Bok, born Wayne Francis Woodard in 1914, was the end of his life which saw him fall from a healthy illustrator to distraught and impoverished astrologer. A blurb regarding Bok’s later life on a pulp artist database has these few sentences regarding the later years of his life. In the 1950s he (Bok) wrote articles on astrology for Mystic Magazine and eventually became obsessed with the occult to an unhealthy degree. He grew increasingly reclusive, malnourished, and dysfunctional, as he wasted away in poverty. Wayne (Hannes Bok) Woodard died of a heart attack at age forty-nine on April 11, 1964.

Naturally, I have been trying to track down Bok (or Woodward’s) astrological articles published in Mystic Magazine but have been running into dead ends. The fact that Bok died in obscurity is not the reason for my interest in his work, yet the ties to occultism and the mystic certainly frames his wild and almost dreamlike use of color in his work. Perhaps I will find his articles in the future and perhaps they will be the ravings of an artist who lost his way in the world. Whatever the case, the mystery of Hannes Bok remains just that, an small footnote in the history of pulp fiction which again is a footnote in the larger scale of the written word. 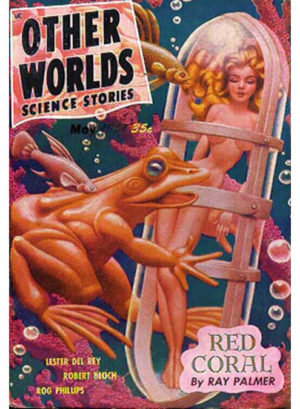 Bok’s actual life is nothing remarkable or even pleasant to recount. Family death and tragedy surrounded this young man until landing a job with Weird Tales in 1939. Bok got his start, in terms of illustration, with the help of Ray Bradbury who passed along his work to Farnsworth Wright, editor of Weird Tales magazine. That painting was the cover the December 1939 issue of Weird Tales and was particularly ghastly with a gas mask figure emerging from what seems like a wall of flames flanked by two corpses. From that point until the mid 50’s, Bok worked on covers and interior illustration for Weird Tales as well as other magazines such as Stirring Silence and Imagination. This would continue until the already mentioned break from society and eventual fall into financial ruin. Various autobiographies such Emil Petaja’s And Flight of Angels describe Bok’s later years as living in squalor with failing health and the absence of most comforts. The cause of death may have even been starvation which is in itself a trope. This does not make a good biography and the cold reality of Bok’s life is perhaps what makes his warm art so appealing.

In terms of art, Bok has been noted for his black and white work as well as his use of color. The featured November 1941 issue of Weird Tales is an example of Bok’s black and white figure against bright explosions of color. Compared to his later work, Bok’s use of color was kept to highlights and accented contrast. During the 1950’s with his work with Marvel Science and Other Worlds, the use of color almost takes over the entire composition with bright shocks of yellow and pink. The 1953 cover of Fantasy Magazine is almost all bright colors thrown together in an almost surreal haze depicting a blue women with alien light illuminating from her eyes. 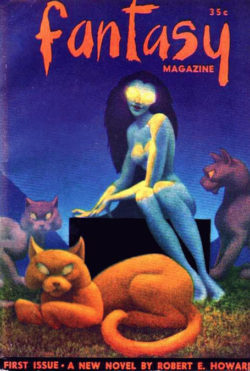 Bok’s interior illustrations as well as the featured self portrait feature exquisite line and stippling. The figure seated upon a pedestal reads from a book while a gargoyle like creature reads from his shoulder. This self portrait is perhaps one of the more poignant images of a pulp artist and perhaps any enthusiast of the fantastical arts. Its classic style invokes the style of Renaissance masters and with the addition of something other worldly. A central component for most pulp, both art and writing, has been the desire for immersion and escape. Bok’s self portrait shows a man put together with the skill necessary to do many things. The creature on his shoulder feels something that is apart of him and the source of something that will never go away.

My draw towards Bok’s work and life uncovers another attraction to the pulp lifestyle. Despite the famous names mentioned, the history of pulp is filled with talented artists who never broke through into the upper echelons of publications. Despite the popularity of pulp magazines during its heyday, the history for these artists, writes, and publishers has become one of cult appreciation obscure adoration. Hannes Bok’s life not unique and his death is damp with odd details. This of curse contrasts his work which is just as fantastic and eye jarring as the rest of pulp’s history.