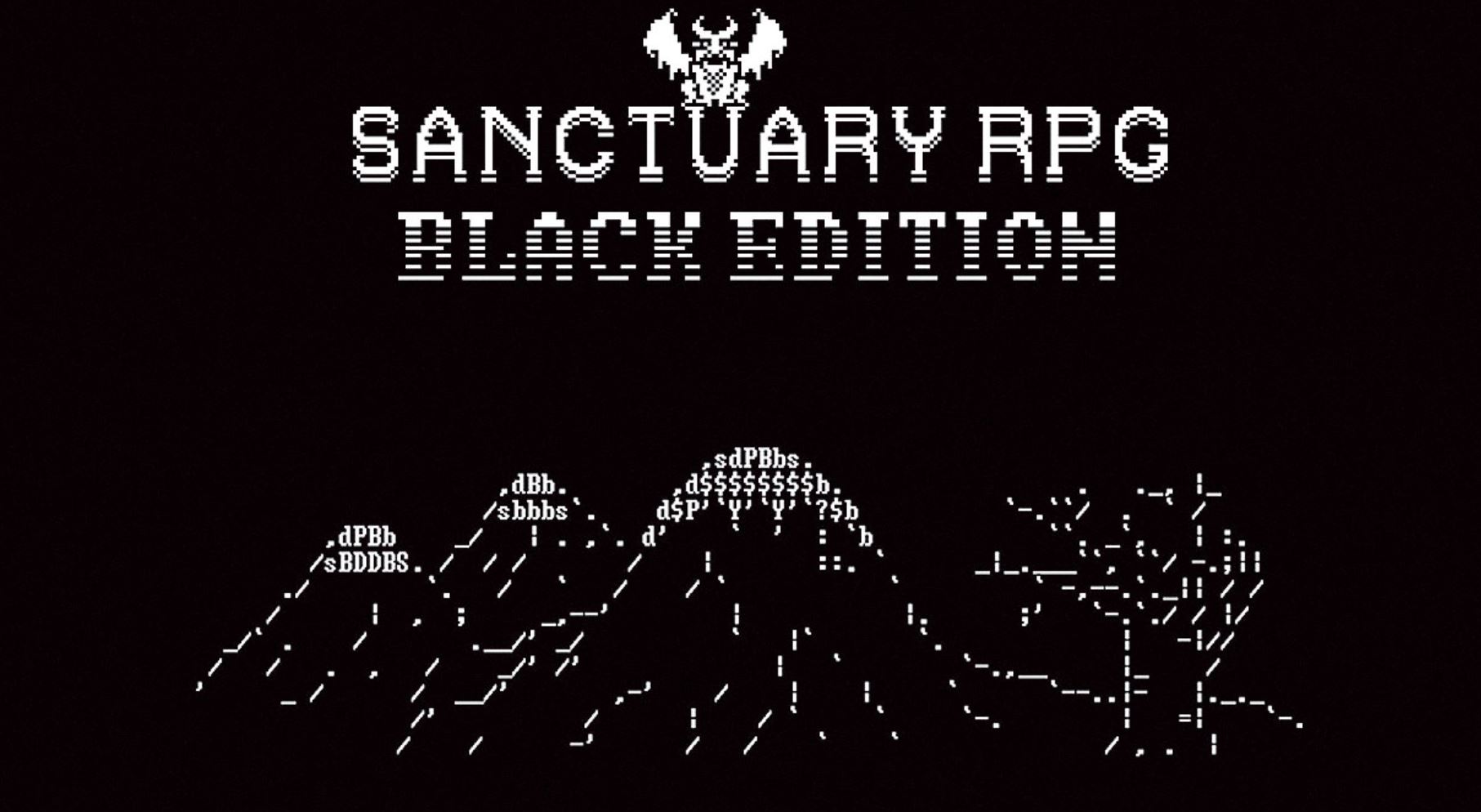 WHILE PATROLING THE VERDANT HILLS OF [STEAM] YOU COME ACROSS A [TEXT BASED RPG] LYING UNDER A BUSH. DO YOU [A] EQUIP IT OR [1] IGNORE IT?
>A

If you found that unbearable, This probably isn’t a game for you. Not only is Sanctuary RPG a text based old-er than old school rpg, it’s also full of the same hit and miss, self-indulgent humor that makes the intro to this review seem like a good idea. Whether that’s precisely what you’re looking for or too short on graphically realistic beheading is entirely down to the individual, but you should be warned that I loved it. The writing particularly was consistently charming, a barrage of small puns, silliness and surrealist oddities build the world more effectively than a thousand renders of muddy fields.

Which is thankful, really, because words are all it’s got.

There’s no such thing as scabbards in Sanctuary, so if you don’t want to wield a sword you’ve no choice but to chuck it.

Well, words and challenge. This is a rogue like, but unlike most of its competitors it takes the heritage totally to heart, meaning that death is the ultimate end it’s meant to be. One ill-timed mistype and it’s back to the character creator, no matter what. More than once I lost hours of progress because I got cocky, or didn’t consider what my enemy was up to. And more than once I overcame an opponent far more powerful than me through careful management of my moves. It’s the good kind of rogue like, where every playthrough is a possible victory, no matter how unlikely. After a while it can become something of an automated process, at least with the weak enemies. You’ll figure out the best possible combo and then you barely need to pay attention unless you’re up against a boss, who will invariably kill you for your hubris.

Even starting again is weirdly satisfying though, with the random Bio’s the game generates keeping just on the tolerable side of random humour. Which is fortunate, because you’ll be seeing them a lot. Despite using calligraphy instead of graphics it’s a surprising time-sink. Unfortunately, the tutorialing is somewhat non-existent and that that does exist is so dryly textual that I chose gruesome trial and error over pouring over dry plain text appendices like a Pre-google IT technician. The medieval subject matter feels atmospherically totally at odds with the presentation just because of the low-tech display. It’s a weird contrast, but while something like this would be ideal for a sci-fi fantasy about mega hacking the cyber-commando’s braincage, it doesn’t go so well with medieval viscerality. Honestly, it reminds me far more of Alien than Conan, even though I spent the majority as a chubby barbarian called “Boy Willie”.

Though the game automatically and without warning cuts your name into a single word, leaving me to wander the world being condescended to at every turn.

By the time you’re done wondering how a skeleton can be both Molten and Healthy, Mr Bones here will have freed yours from it’s meatsack

There’s a weird amount of depth for a fixedly 2D experience, as self-satisfied as that sentence makes me sound. While I fully expected a joyful romp through medieval strangeness, I found myself running a bar, building a house, mining from ore and joyfully romping through medieval strangeness. At first I thought the ASCI thing was a gimmick, a cheap hook to distinguish it from the hundreds of bargain-bin rpg’s out there. Having played it a bit though, I’m not convinced. While you can’t argue it’s definitely saved them some money, anything saved has gone elsewhere. The level of complexity here may not be as great as something big budget, but it’s definitely more than 1/10th, and that’s what it cost. Or, at least, that’s how it feels. The random item generator and the fact you can’t hold onto things for letter keeps well in line with the minimalist style of the entire game.

With that said, if you told me you thought all that was just the result of laziness I’m not sure I’d find too many reasons to argue. If you’re the kind of person who demands games that push the limits of technology, or even just somebody who spent an embarrassing amount on your PC and take it as an affront when people suggest fun isn’t measured in MHZ, you’ll hate this. Perhaps you’re right to.

Personally, I choose to imagine that this isn’t the product of laziness but vision, and if that statement reveals me to be the disgusting hipster I secretly fear I am, then so be it. I just know I had a damn good time.