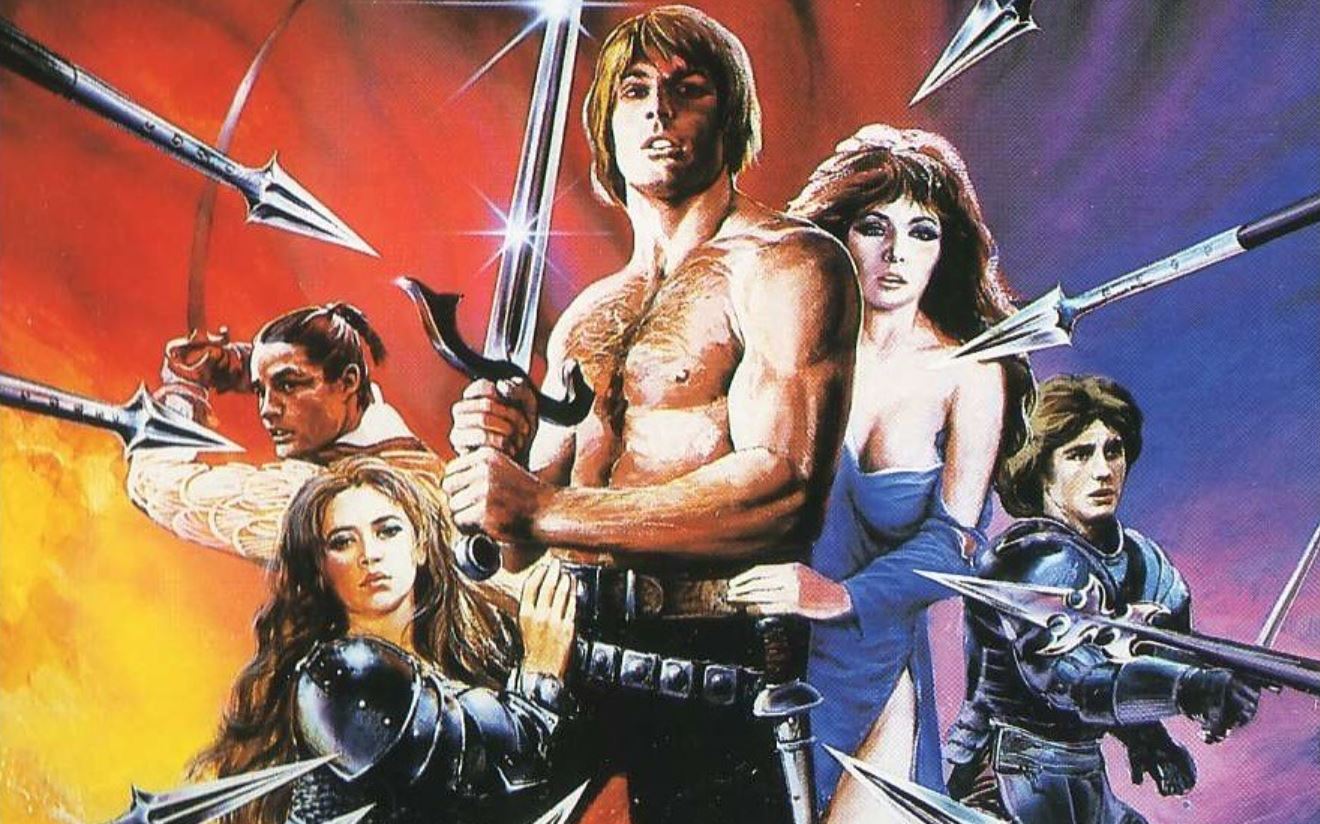 Oh fuck, there is a U in Armor. This means it is going to be a European fantasy film. While the majority of films discussed thus far have been of British and American stock, Europe, and Italy in general, cannot be overlooked for its unique take on the genre. Before the United States and Britain would push out large fantasy blockbusters, Italy was the premier exporter for sword and sandal films. When I say premier, I mean they strangled the market with literally hundreds of films involving greek mythology and biblical adventure. Hundreds. The sword and sandal genre would wain with the coming of spaghetti westerns but Italy has always been a fantasy force to be taken seriously. You know, a force that includes everything except for this film.

Much as the lofty vowel indicates, Hearts and Armour is an Italian fantasy film taking place somewhere between the Dark Ages and god knows fucking when. Hearts and Armour tells the sappy melodramatic tale of star crossed knight-lovers and is set against the backdrop of the Crusades. Just think of the Montagues and Capulets being replaced by white Christians and white Moors. Well, I guess Moors could be a little fair skin being so close to Spain, oh wait that king looks like he is from Canada, nevermind. Unlike any other film with a budget over 500 dollars, Hearts and Armour aims for minimalism by adhering to strict rule of no more than 10 living things on the screen at one time. Hold on, I haven’t even gotten to the crazy parts yet. Bradamante, a strong female lead if not for the blubbering loyalty to a male figure.

Hearts and Armour follows the exploits of Bradamante, a woman who was granted a suit of haunted mail after avoiding rape in a waterfall passage. Bradamante then wanders into the circle of medieval soap opera by getting wrapped up in a love triangle, square, pentagon with some knights and moorish warriors. It is difficult to keep track of characters aside from all the goddamn ridiculous sculptures on top of their helmets. For all I know, Sidewards Sun Head is being fawned over while Half of a Sword Head is acting like a dick while Tulip Head and Horn Man are just trying to help out. This is complicated when the Moorish Pineapple Head falls in love with Bradamante and his sister, um Angelica, is really in love with Sidewards Sun head. You laugh now but this is the only thing that is keeping me from getting lost in this film.

When I said minimalism for this film’s quality, I meant it as sort of a curse. Hearts and Armour is really based on Orlando Furioso — a 16th century Italian epic love poem. Because all 16th century renaissance poetry transfers well to modern cinema, Hearts and Armour is a surreal drifting mess that is aimed to be subtle art but is executed as pockets of something, I’m not sure what. The film feels like they employed half trained actors and stuffed them with peyote, dressed them in elaborate costumes, and forced them to act out soap opera lines written by a 7th grader in the middle of an Italian countryside. There are parts in the film that would probably even confuse Renaissance nobility as I am still trying to figure out what in the hell happened with Bird Face Man, Angelica, and whoever saved her from their overacted rape scene. Sidewards Sun Head, that’s right. Give me some goddamn notecards. Why this picture exists or represents a quarter of the images available for this movie is beyond me. Well, maybe not. Look at those abs.

I am going to spoil everything and tell you that Bradamante and Pineapple Head finally get together. So does Angelica and Sidewards Sun Head but before that we have a smorgasbord of goofy nonsense including and not limited to another attempted rape scene by an invisible magician, a final showdown between Half of a Sword Head and a Metal Samurai which ended in someone being impaled by a hat. Also, do not forget comic relief by a forest sorcerer and an attempt on Bradamante’s life by Pineapple Head’s ex-girlfriend dressed up in his armour. Bradamente is devastated and runs off crying only to cry more when Pineapple Head shows up unscathed and they live happily ever after. While I would say that Brandamente is the biggest loser in this film due to her complete lack of direction and will to survive without a boyfriend, I am going to have to settle on everyone who just watched the film as being the biggest loser for having sat through all her shit.

Somewhere between intent and complete loathing for the audience, Hearts and Armour fails to reach its mark to even be a watchable fantasy film. While I was harsh on Krull and Red Sonja, at least those two had sturdy narratives that were not made out of wilted roses. Hearts and Armour is the direct result of centering your movie around artisan suits of armor and expecting a plot to be created by some act of fate.