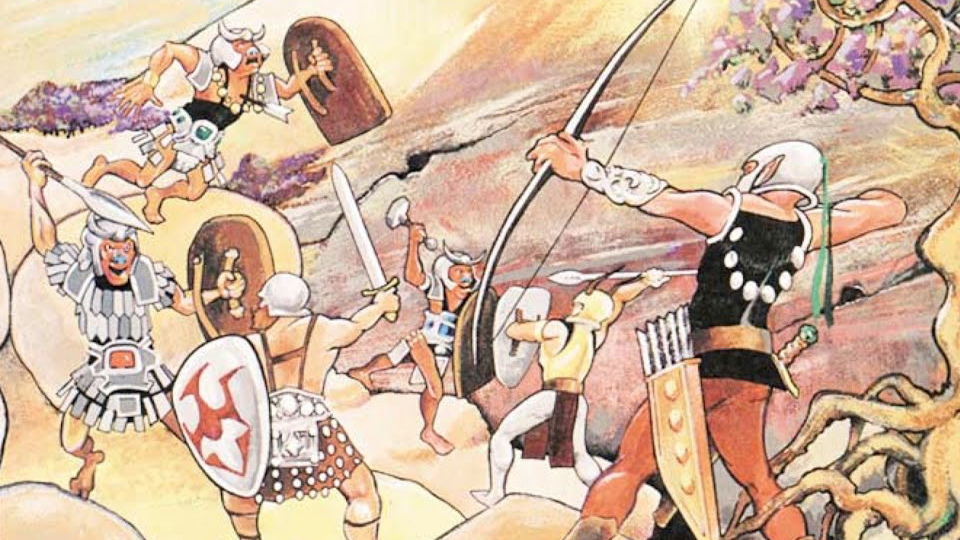 If there ever comes a time in my life when I do not listen to dungeon synth (DS), I will look back on it as a genre that give me much more than the music everyone thinks about. DS is related to so many weird and outsider genres that just by association, it offers walking paths to some of the more fringe genres of electronic music. This digest is set up in a way that it leads with some of the more popular traditional sounding music and eventually unravels into madness. The ends of these digests has always been my favorite as I enjoy wrestling with the angels of the odd. Whether horrid looking or nicely put together, DS offers many things for many different types of people. From fantasy nerds to artsy weirdos and from the devout to even the intrigued outsiders, this genre has been a haven for anyone stepping off whatever path they are on. Maybe this is why I chose the cover art for the D&D module “Keep on the Borderlands” which was intended to serve an a campaign prompt for new players. In it, the party would have their homebase which was the keep surrounded by the fringes of wilderness and adventure. I always liked having that safe/danger dichotomy in my RPG campaigns and it seems to spills over into my music choices as well. Maybe I am just a big dork. I maybe coming to terms with this.

I have talked at length about Erang being my first contemporary dungeon synth artist and subsequent journey in the depths of the catacombs. Erang is an artist who is constantly changing and progressing creatively. From traditional dungeon synth to Carpenter-esque synth wave, the worlds created are new and often times dazzling. The First Age is a new narrative centered around an individual finding the Tomes which made up Erangs first four albums. This meta-narrative is interesting and has Lovecraftian overtones as the story progresses. This with a bold mesh of different styles makes The First Age a new chapter in Erang’s storytelling which also has footnotes to previous sections. From the liner notes, this proposes to be Erangs last record as we know the artist and if this is true, then I am glad I have been along for this wild trip.

Inquisitor is from the UK and has devoted the album “Rise and Fall” a classic narrative technique for an album framework. Centered around the rise of an adventurer and the fall of some mythical beast, Inquisitor presents an incredibly epic story with a bedroom style production which is both charming and entrancing. The raw of this album comes not from the immensity of the actual production rather the ambition of its creator.

The cover art for this record comes from a 1914 illustration by Kay Nielsen for the collected Norwegian fairy tale East of the Sun and West of the Moon. The music for I however is much more vague and comprises a new story for a new artist. Presented as a first chapter in an ongoing story, I has a striking presentation which is both immersive and atmospheric. The use of the 1914 artwork does fit the mood of the records and it would be interesting if the artist would continue to borrow from the series for further records.

Moonless Nights represents a long obsession with a fringe DS artist not even playing in an orthodox style. What this German artist lacks in traditional sound, they make up for with dreamlike atmosphere and regal fantasies.

I am frankly astounded by this release. Somewhere between DS and deep soundtracks from 80’s fantasy films comes a record with one of the coolest project names. The House of Hidden Light does not have the glacial moving synth sounds but its immersion and complexity goes far beyond most things released this year.

Secluded Alchemist has been a new artist for me only releasing a demo earlier this year. What has been consistent however is the quality from the music and Arcane Sanctuary being a thematic followup to the ethereal presentation of the project’s demo. In a genre full of flavorful artist and album names.

Witches Moon blew up last month and in terms of DS, that means a handful of people were talking about it at once. Six of Wands is a traditional DS or at least synth classical release whereas A Swing of Sickle to Summer’s Dawn was a black metal record with DS woven into the fabric. Witches Moon continues to use Tarot card art for album covers which is both bizarre and intriguing. The music is both ambitious and charming in its lo fi production. Perhaps this is what everyone wants out of DS.

I only knew Alba from the submission for the newest Dungeon Synth Compilation. Comparing the short Innocence release with previous works shows an artist who is not only working through styles but making leaps and bounds in terms of quality. Mournful and thoughtful, this is new ground which is the future site of something spectacular.

[Editor’s Note: originally linked media has been taken down. We were unable to find any of Mithil’s other content to replace it. Apologies!]

I try to be discerning when it comes to DS demos since the style already gives a lot of room for production values. Successful demos are a demonstration of future talents in raw or even condensed form. This is why the debut demo by Mithril is so intriguing since it is a 25 minute two song demo full of hazy atmosphere and vivid imagery invading fantasy and history.

“Winter synth” is a style or subgenre of DS that involves cold and snowy imagery and sounds. I am not entirely on board with the distinction but it is interesting to hear artists embrace at least a bleak and desolate landscapes. Inori And is working towards a kingdom of ice with music befitting castle trapped in a glacier.

I think it is just going to be a fact anything on Eldest Gate Records ends up at the weird and fringe end of the digests. Much like the back pages of some magazine, this is where the odd lives and it is fantastic. Mekrevtrozmbreh is a slow moving record and by all accounts toes the lines between music and a collection of droning noises. What this record does however is create a ghostly sense of haunting which is befitting its Bandcamp flavor text.

Time to get weird. It is the last entry and if you are down here you are ready for musique concrete, lowercase, EAI, drone, and a window to subconscious. What Myra Siewert does that is different than a lot of musique concrete or even most drone artists is make things interesting as there is a surprise waiting around the eleven minute mark of the first track and by surprise i mean a horrible nightmare.